Trump's plan to help his rural base? Just Obama's leftovers

Trump vowed to "rebuild rural America," and won big in those areas. So far he's done almost nothing to help farmers 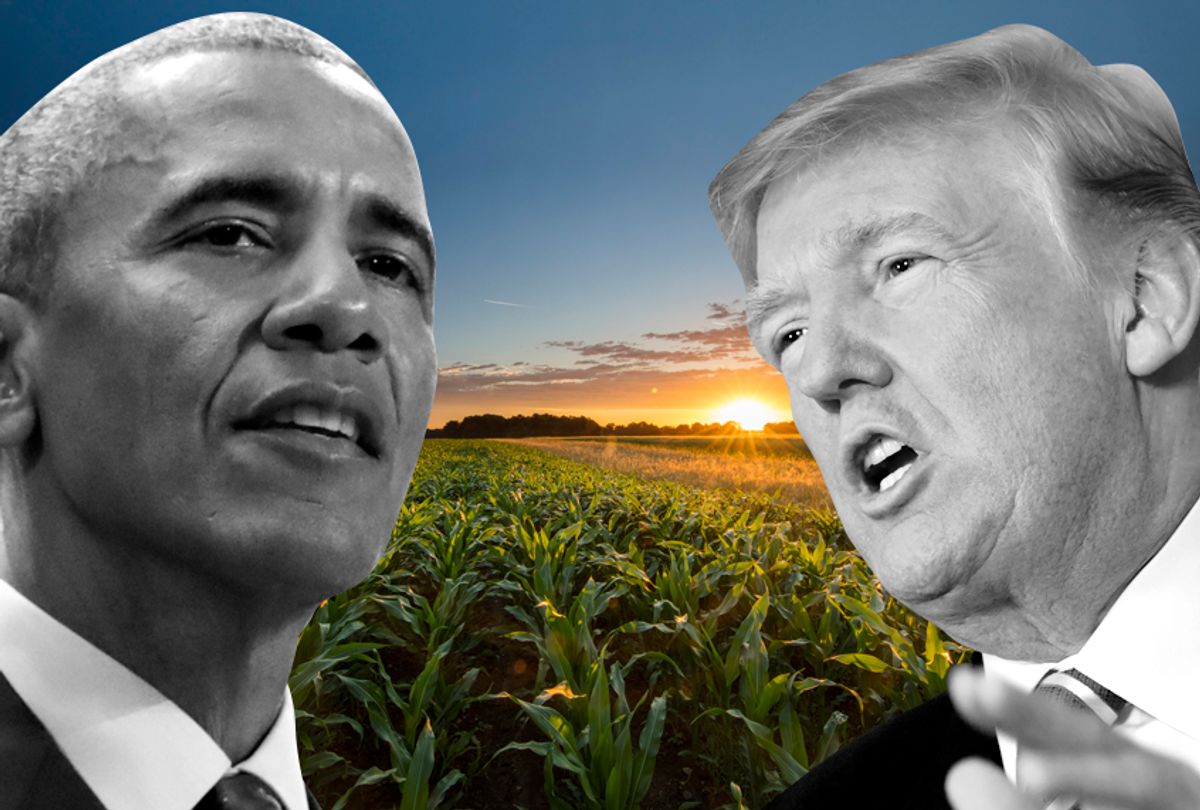 Donald Trump often promised to “rebuild rural America" when he campaigned across the country during his presidential run. Exit polls showed that rural America believed him, with 62 percent of voters in small cities or rural areas backing Trump in 2016. But as we approach his one-year anniversary in office, Trump’s words on the campaign trail ring hollow  as the promises he made to his base go unfulfilled. So on Monday the president traveled to Nashville, to offer up more promises to the “forgotten man” in Trump country — the biggest being a plan originally introduced by Barack Obama.

Agribusiness is listed as the 10th-biggest industry in campaign contributions, according to the nonpartisan group OpenSecrets. In 2017, the American Farm Bureau Federation, the largest organization of farmers, spent more than $3 million on lobbying. The industry heavily backed Trump. The president thanked them for their support on Monday by becoming the first sitting president to address the group in 26 years.

“Oh, are you happy you voted for me?” Trump asked at the group’s 99th annual convention. “You are so lucky that I gave you that privilege,” he added.

It’s not quite the "What do you have to lose?" question that he repeatedly asked the African-Americans and Latinos who were not at his campaign rallies. But it's a perplexing question to ask a base that still hasn’t gotten much attention from the president.

Although he said on Monday that "in every decision we make … we are honoring America's proud farming legacy," several of Trump’s policies run contrary to the positions advocated by Farm Bureau. According to NPR, net farm income in 2017 was only about half what it was in 2013. Trump’s constant boasting about the stock market ignores the collapse of commodities prices, as Bloomberg’s Alan Bjerga notes:

While other parts of the U.S. economy are going strong, farmer finances have struggled since the end of a commodities boom in 2013. Profits in 2017 are estimated at less than half the record levels of four years earlier.

Then there is the impact Trump’s proposed trade war could have on an already weak market. Farmers and ranchers both depend in part on exports, which Trump has threatened as part of his effort to “renegotiate” NAFTA. Additionally, his immigration restrictions could choke the flow of migrants to harvest U.S. crops. A group of small farmers even sued the Trump administration last year for repealing an Obama-era rule that would have made it easier for independent farmers to sue massive production companies.

The Trump administration has done very little during the first year for America’s farmers, but on Monday the president threw them a bone — only to turn around and demand their adoration.

“I support a bill that includes crop insurance, unless you don’t want me to,” he joked to the gathered farmers on Monday. While campaigning, Trump vowed to shrink the program that many farmers rely on to fund their year-to-year operations. His 2018 budget, released in May, proposed cutting $46.54 billion in federal agricultural funding, mostly by capping the amount the government contributes toward crop insurance. “I guess you like it right? Good. Because if I heard no applause I’d say ‘Forget it, give it up.’ Now I can’t do that,” he said on Monday.

Trump also touted the GOP tax bill even though only about 80 small businesses and small-farm estates are expected to face an estate tax in 2017, according to the nonpartisan Urban-Brookings Tax Policy Center in Washington.

“Changes to the corporate tax may create jobs, but this is not reflected in the lives or outlooks of many farmers,” former Indiana Republican Sen. Dick Lugar told Bloomberg. The onetime chairman of the Senate Agriculture Committee noted that Trump has done little to follow up on his campaign promises to rural farmers. “Somebody probably said to the Trump hierarchy that the president better go to Farm Bureau and show some interest in agriculture,” Lugar said of the president’s trip to Nashville.

After taking credit for working to roll back the Obama administration’s interpretation of the Clean Water Act, Trump signed an executive order following his speech that essentially continues the work started by the Obama administration. “Those towers are going to go up and you’re going to have great, great broadband,” Trump told the nearly 5,000 farmers, explaining his plan to expand broadband internet access to rural communities. Obama signed a similar executive order while in office. The White House contends that Trump’s executive order goes farther that Obama’s did, but Trump's proposal to expedite the federal permit process and make more federal lands accessible doesn't actually offer any new funding to actually broadband deployment in rural areas. Instead, the administration is relying on a free-market solution that "gets government out of the way" to allow the private sector the chance to compete for access to low-density customers. According to a 2016 Federal Communications Commission report, only 55 percent of rural residents have access to downloads faster than 25 megabits per second, the government’s standard for adequate service. In urban areas the access rate is 94 percent. Although major telecoms like Comcast have recently announced major investments in rural broadband access, government investment is the only thing that has allowed many rural Americans access to the rest of the world via an internet connection. Obama’s 2009 stimulus bill allocated $7.2 billion for rural broadband and Trump’s Department of Agriculture announced in November of 2017 plans to invest more than $200 million to help bring broadband to rural communities. Expanding access to broadband is the opposite of a third-rail issue in politics. It is one of the few issues that enjoys bipartisan support on Capitol Hill, and it the only thing Trump has to offer a base to whom he promised so much more. “Farm country is God’s country,” Trump declared on Monday. “And we want our national anthem respected as well,” the president said, receiving one of several standing ovations as impromptu chants of “USA!” broke out.