Will Trump's possible testimony end the Mueller probe — or is it just starting?

Trump's lawyers hope his testimony will wrap up Mueller's investigation. Not so fast: Ask Bill Clinton about that 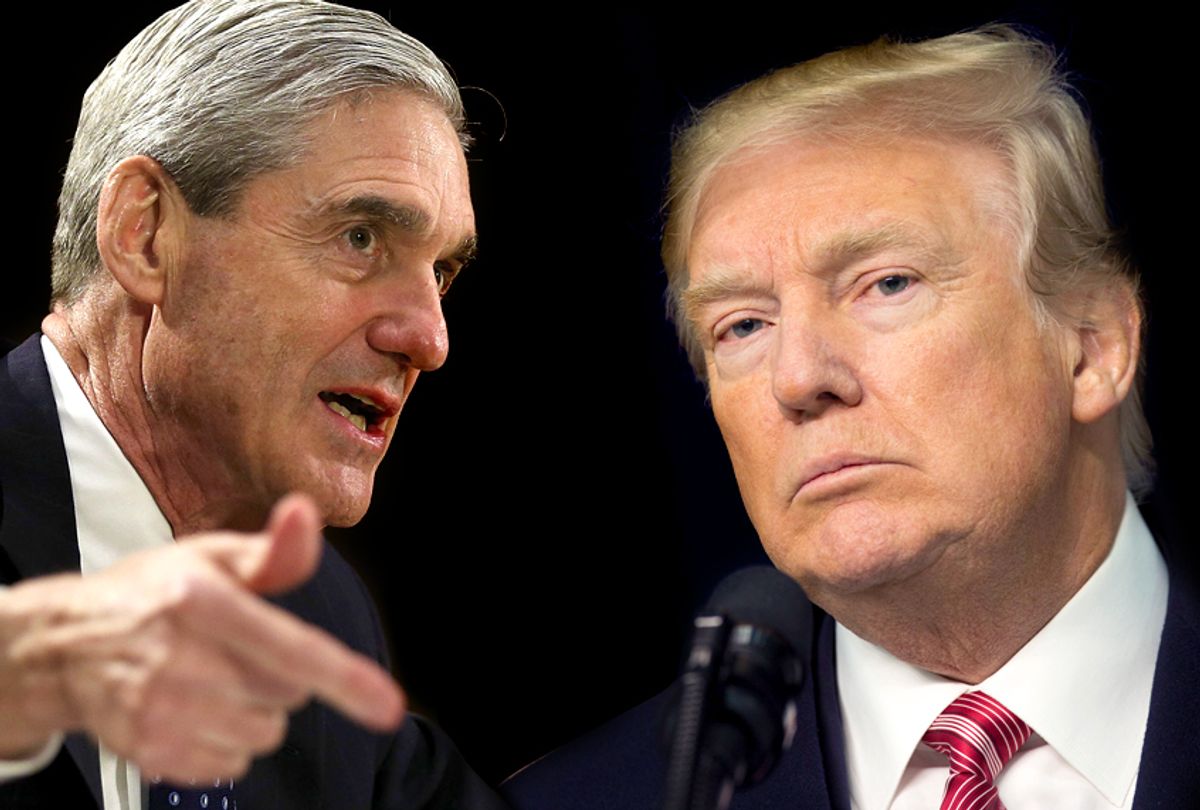 With all the day-to-day craziness around President Trump, it's easy to forget what serious legal trouble he may be in. He may have many character flaws, might be dumb as a post and could even have some kind of neurological problems, for all we know. His White House is a mess and he's in the process of finally killing off whatever vestiges of integrity were left in the conservative movement. Any of that would be a stunning set of problems for any presidency. But the fact that just a year into his presidency, Trump will reportedly be asked to speak under oath to a special prosecutor about a counterintelligence investigation into his campaign, presidential transition and administration, is still mind-boggling.

He won't be the first president to testify in an independent probe of his administration, of course. Ronald Reagan testified under oath in the Iran-Contra scandal, where he memorably said he could not recall anything about it. George W. Bush and Dick Cheney testified before the 9/11 commission together, under extremely limited circumstances. But the most direct parallel is Bill Clinton, who spoke with prosecutors more than once: He was compelled to give a sworn deposition in the Paula Jones case and then testified before a grand jury in the Monica Lewinsky matter.

Recall that at the time the independent counsel's office was investigating a penny-ante real estate deal from the 1980s, "cronyism" in the firing of the White House travel office and a sexual harassment civil case from Clinton's time as governor of Arkansas. In the course of those investigations, the affair with Lewinsky was uncovered and Clinton denied it, which led to charges of perjury and obstruction of justice. In contrast to the Russia investigation and Trump's nepotism and ongoing corruption, it was a joke.

Clinton was supposed to testify on a live feed from the White House, but at the last minute the independent counsel demanded that it be taped because one of the grand jury members had to be absent. In the end the grand jury was never asked to return an indictment. The testimony was instead used by independent counsel Ken Starr to make an impeachment referral to the House of Representatives. House Republicans immediately voted to release the report, the underlying documents and the tape of Clinton's supposedly secret grand jury testimony to the public.

I only bring up this stale history to show just how ruthless the independent counsel was in pursuing a case against President Clinton and how craven and openly contemptuous the GOP House was toward the normal processes pertaining to secret grand jury testimony. Keep that in mind as modern-day congressional Republicans begin to wring their hands over "prosecutorial overreach" in the Mueller investigation. You know they will.

According to The New York Times and NBC News, Trump's lawyers have been brainstorming over how to respond to a request from special counsel Robert Mueller to speak with the president, since at least October. Mueller finally raised the subject unofficially in a meeting in late December. The assumption is that the prosecutors have homed in on possible obstruction of justice charges and that Trump will be the final witness.

According to all the experts, this is a strong signal that the case is close to wrapping up, although I would point out again that Clinton spoke with the independent counsel's office multiple times over several years and ended up testifying before a grand jury, so it's not written in stone that the entire probe is about to come to a close. There are a number of tentacles in this investigation, from the Paul Manafort trial to money laundering and Russian election interference, whose true extent we still don't know.

The experts also caution that Trump's lawyers will likely try to keep him as far away from Mueller as they can. Trump has been sued in civil court many times, so he has a lot of experience with depositions and has shown that he can be coached to be calm and say nothing more than the bare minimum. (He has also lied repeatedly under oath.) But speaking directly with the special counsel is quite different. Trump is looking at potential criminal charges for himself and his family, and nobody knows how he'll respond in such a high-stress situation.

It seems likely that Trump's lawyers will seek a deal that has the president swearing an affidavit or answering written questions. They may try to arrange a version of George W. Bush's question-and-answer session before the 9/11 commission, in which the president is not under oath but agrees to speak for a very limited time.

There is no sense of whether or not Mueller and his team are amenable to any of that. If Trump refuses to cooperate outright or if they're not satisfied with his answers, they can subpoena the president. United States vs. Nixon settled that question, which is why Clinton ended up volunteering to testify before the grand jury -- Starr said he was ready to issue a subpoena if he didn't. We know what ended up happening that time, although in Trump's case the issue at hand isn't nearly as important as lying about an illicit affair. We're only talking about conspiring with a foreign adversary, and then obstructing justice to cover it up.

It's clear that the Republicans in Congress have no intention of doing anything to further this investigation, so Trump has nothing to worry about there. If Mueller were to report to the House with articles of impeachment, as Starr did, they would immediately be thrown in the trash and the evidence would never see the light of day. If that's Mueller's intention, he will have to wait until the American people have their say in November.

This is why I suspect that all this talk of Mueller closing up shop soon is likely to be wishful thinking. It could be true, of course. There is some possibility that Mueller has found that all that intelligence chatter during the campaign added up to nothing and the only people who are culpable of any crimes are the four he has already indicted. But if there's more to this and he believes there is a case against the president himself, I'd be surprised if this whole thing winds up before next year at this time. This next phase of the scandal is only beginning.