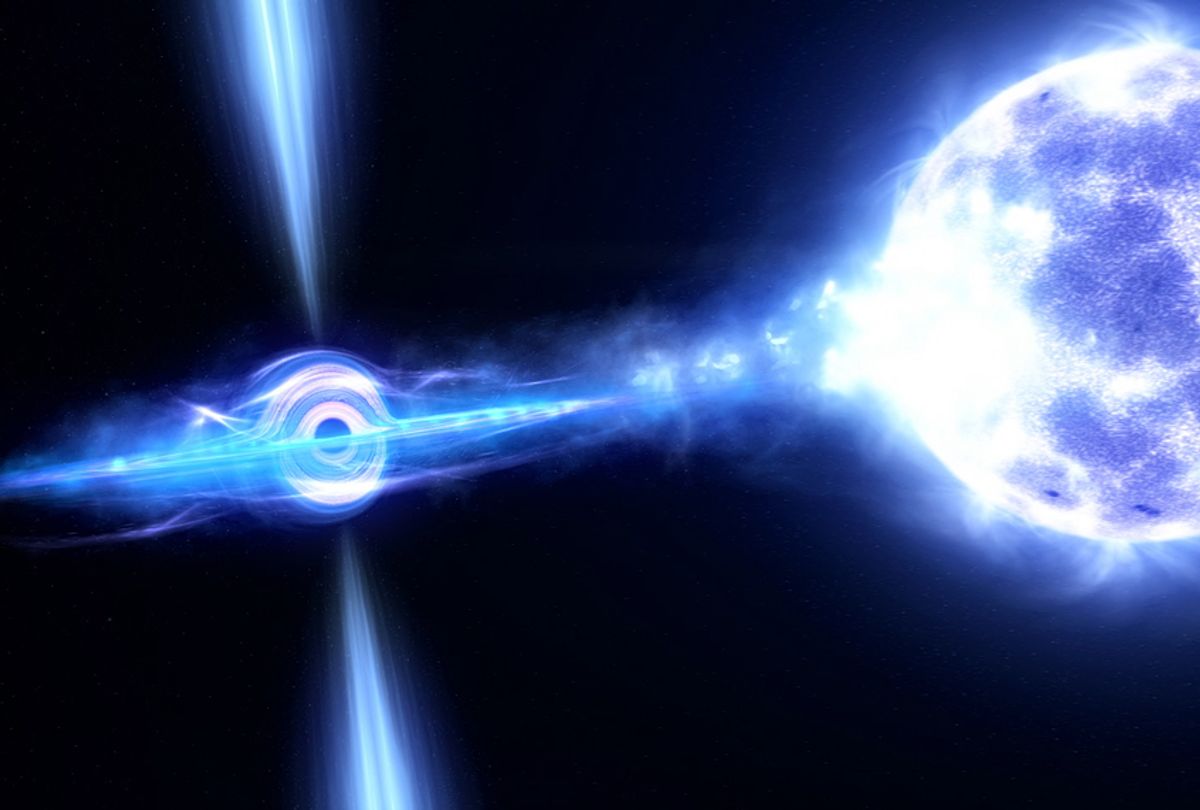 It's easy to recommend the new episode of "Nova," which is aptly titled "Black Hole Apocalypse." As someone who only infrequently ventures into the world of casual science documentaries, I found that it struck a perfect balance between entertaining me while explaining complex concepts that would normally be outside my bailiwick.

Yet as a political commentator, my mind couldn't shake its awareness of a tragic subtext. It permeates every frame of the episode, even though the show itself never explicitly brings it up, and called to mind an observation that physicist Janna Levin (who hosts the episode) shared with me.

"I think it is a really scary time when we have science deniers — even just in principle, science deniers — but to also deny scientific progress in a field that has an incredibly immediate impact on our well-being like climate science," Levin told Salon. "That is utterly sickening and terrifying. There are so many people in this country who don't want to be stupid. They love ideas and they love science and they want to know."

Just to be clear, Levin also told me in that interview, "I don't know anything about politics. I'm only interested in things that happened a billion years ago." When she shared her observations about America's anti-science attitude with me, she did so not as an activist, but as a scientist.

Yet scientific discoveries like the ones chronicled in "Black Hole Apocalypse" won't be possible if right-wing Republicans have their way. It is not simply that they deny climate change or view science with skepticism. Even the ones who may recognize that human being are heating up the Earth and that humans evolved from monkeys will still often support cutting science funding because of their dogmatic embrace of free market ideology.

If they had had their way over the past 100 years — or, more precisely, had their way more often than wound up actually being the case — some of America's greatest contributions to human history never would have happened.

It's all right there in "Black Hole Apocalypse." As executive producer Chris Schmidt told me, the documentary covers everything that viewers could want to know about black holes "from soup to nuts, from the origins of even the idea of a black hole with the general theory of relativity, all the way up to the most recent discoveries which include the probable creation of a black hole through the collision with the so called kilonova, the collision of two neutron stars that LIGO [the Laser Interferometer Gravitational-Wave Observatory]  detected at the end of last year." Schmidt added that the detection of gravitational waves caused by that collision, which among other things provided additional confirmation of Albert Einstein's theory of relativity, marked "the first time that there’s been an event, a cosmic event that was visible both in gravity waves and in electromagnetic spectrum, that probably created a black hole."

If you've never heard of LIGO, it is a large-scale physics observatory that has received an essential amount of its funding from government agencies like the National Science Foundation (Trump has made a point of targeting science funding for cuts). It was a pair of LIGO detectors, one in Louisiana and the other in Washington state, that in 2015 picked up on the gravitational waves caused by the merging of two black holes. Two years later, other government-funded observatories joined with private ones to learn from the gamma rays emitted from the kilonova.

It isn't just LIGO that never would have existed had it not been for funding from the United States government. Without government funding we wouldn't have NASA and with it the massive quantity of astronomical knowledge that has changed our understanding of the universe. We also wouldn't have the internet, which means that I wouldn't be writing this article and you wouldn't be reading it, or Google, which will allow you to learn about this subject or anything else that comes to mind. We wouldn't have microchips, or many life-saving vaccines, or countless other technological advances that have changed our lives.

To be clear, none of this political subtext is in the documentary itself. Nor should it be. But at a time when anti-government fanaticism seems to have reached a critical mass, it is important to take a step back and look at some objective facts about how our government has impacted our day-to-day lives. I'm not saying that the government is an absolute good, or even that it is devoid of terrible evil — that would be nothing more than the inverse of the simplistic mindset used by right-wingers, who insist that the government is nearly always evil (except, of course, when it performs the handful of functions that make the rich richer or otherwise preserve the status quo).

What I am saying is that, if we look at the history of our government much as scientists observe the history of our universe, we realize that its funds can be used to help humanity advance in ways that would not have been possible without its assistance. There is something profoundly troubling about the possibility that the discoveries featured in programs like "Nova: Black Hole Apocalypse" could be impossible in the near future because right-wing ideologues ignore our history and defund the sciences. We need to be aware of the threat that this could happen and combat it with some cold, hard truth.

To do otherwise would be downright unscientific.