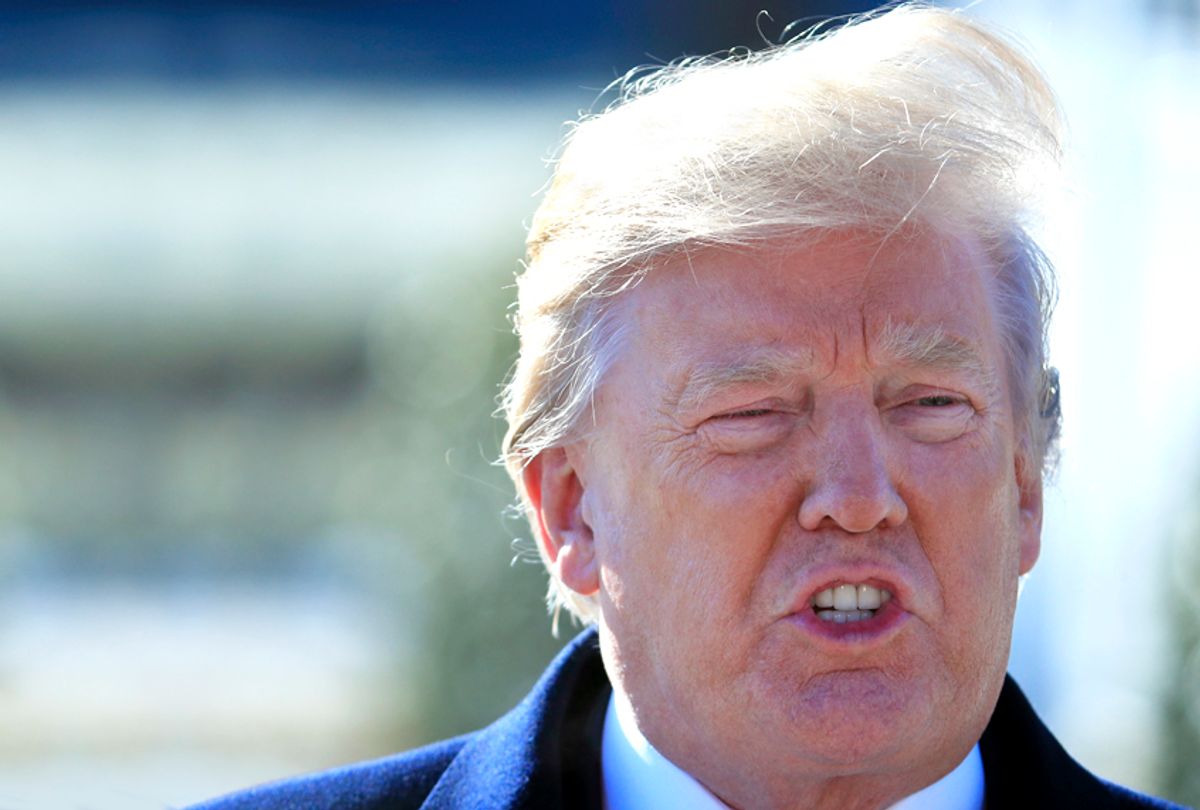 Should the 25th Amendment to the Constitution be invoked to remove President Donald Trump from office because his obvious mental health issues are imperiling the safety of the United States and the world?

Political disagreements aside, the public evidence in support of such an action is overwhelming. Trump's speech and other behavior indicate a man who is detached from reality and living in a universe of his own delusions.

To wit, Trump appears to be a serial liar who has convinced himself that his untruths can bend empirical reality to his will. Donald Trump is either indifferent to the suffering and harm that his actions cause others or is incapable of feeling empathy toward people outside what he understands as his "base." He talks of violence with evident delight, and has also bragged about sexually assaulting women.

Michael Wolff's much discussed new book "Fire and Fury" references multiple sources, both inside and outside the White House, who express concern that Trump is mentally deranged and perhaps should be removed from office.

Over the last two years of my writing here at Salon, and also for my podcast, I have spoken with dozens of the world's leading experts in fields as varied as political science, law, sociology, national security studies, history, philosophy and psychology about the ascendance of Donald Trump and what this moment means for American democracy.

Their concerns about Trump and his movement can be distilled into several points.

It would be a horrible error to conclude that these concerns are separate from one another. Most importantly, Trump's disregard for democracy and his abuse of presidential power to advance his own (and the Republican Party's) goals are enabled by his malignant narcissism and apparent sociopathy. In short, Donald Trump can be described as a would-be despot, a petit-fascist and a person suffering from significant mental impairment. None of these conclusions is mutually exclusive.

Trump's behavior throughout his presidency -- but especially toward the end of 2017 and during the first days of 2018 -- offer many examples of this overall dynamic.

Trump has used Twitter and other means to explain that he is a "very stable genius," threatened his political rivals with imprisonment without trial, and proclaimed that he and his followers are "victims" of a great conspiracy by their "enemies" in the media. Trump's malignant narcissism and delusional fantasy world is then used to legitimate urging the Department of Justice and FBI to engage in a witch hunt against Hillary Clinton, James Comey, and potentially anyone else who opposes him. Because he does the bidding of right-wing Republicans, their party has done everything in their power to protect him from the consequences of possible collusion with Russia during the 2016 presidential campaign, and evident obstruction of justice thereafter.

In total, these examples validate the concerns of the many experts I have spoken with about Donald Trump. An independent judiciary and legal system are the foundations of a healthy democracy; once a leader uses the law to attack his enemies and advance his personal goals a democracy is lost.

2017 was a gradual process of normalization to political madness and the near-triumph of American fascism. Moreover, the American people have been even more compliant and passive than even the most cynical political and social critics (such as myself) would have expected. It is likely 2018 will be even worse. The political rot of Donald Trump, the Republican Party, their media and public has metastasized. The American people are in pain but have grown increasingly accustomed to it. The abnormal has become normal and the bizarre is matter of fact.

During the 2016 primaries, philosopher Danielle Allen offered a chilling meditation on the potential for fascism in Donald Trump's America. Writing at the Washington Post she reflected on how:

Like any number of us raised in the late 20th century, I have spent my life perplexed about exactly how Hitler could have come to power in Germany. Watching Donald Trump’s rise, I now understand. Leave aside whether a direct comparison of Trump to Hitler is accurate. That is not my point. My point rather is about how a demagogic opportunist can exploit a divided country.

To understand the rise of Hitler and the spread of Nazism, I have generally relied on the German-Jewish émigré philosopher Hannah Arendt and her arguments about the banality of evil. Somehow people can understand themselves as “just doing their job,” yet act as cogs in the wheel of a murderous machine. Arendt also offered a second answer in a small but powerful book called “Men in Dark Times.” In this book, she described all those who thought that Hitler’s rise was a terrible thing but chose “internal exile,” or staying invisible and out of the way as their strategy for coping with the situation. They knew evil was evil, but they too facilitated it, by departing from the battlefield out of a sense of hopelessness.

One can see both of these phenomena unfolding now.

Allen presciently concluded that no democracy can survive "without an expectation that the people require reasonable arguments that bring the truth to light," but Trump "has nothing but contempt" for the intelligence of the American people. Could we, she wondered, "find somewhere, buried in the recesses of our fading memories, the capacity to make common cause against this formidable threat to our equally shared liberties"?

The American people did not rise up to save their democracy in November of 2016. The "Resistance" was stillborn, and remains so.

The American people are not the first to experience a democracy succumbing to authoritarianism and fascism, nor will they will be the last. Many Americans believed themselves special, and America is and was the "greatest country on earth." In reality, Donald Trump and the Republican Party's assault on democracy represent an all-too-common scenario in much of the world.

Under Trump's rule the American people have shown themselves to be all too mediocre. Our democratic institutions and political culture look less grand now. Alas, American exceptionalism is a joke. Trump and the Republicans wrote the punch line and tens of millions of Americans laughed along, to their own detriment and what could be their ultimate demise.