Why Jeff Sessions' war on weed is a futile pursuit

He can do some damage, but he can't roll back the clock 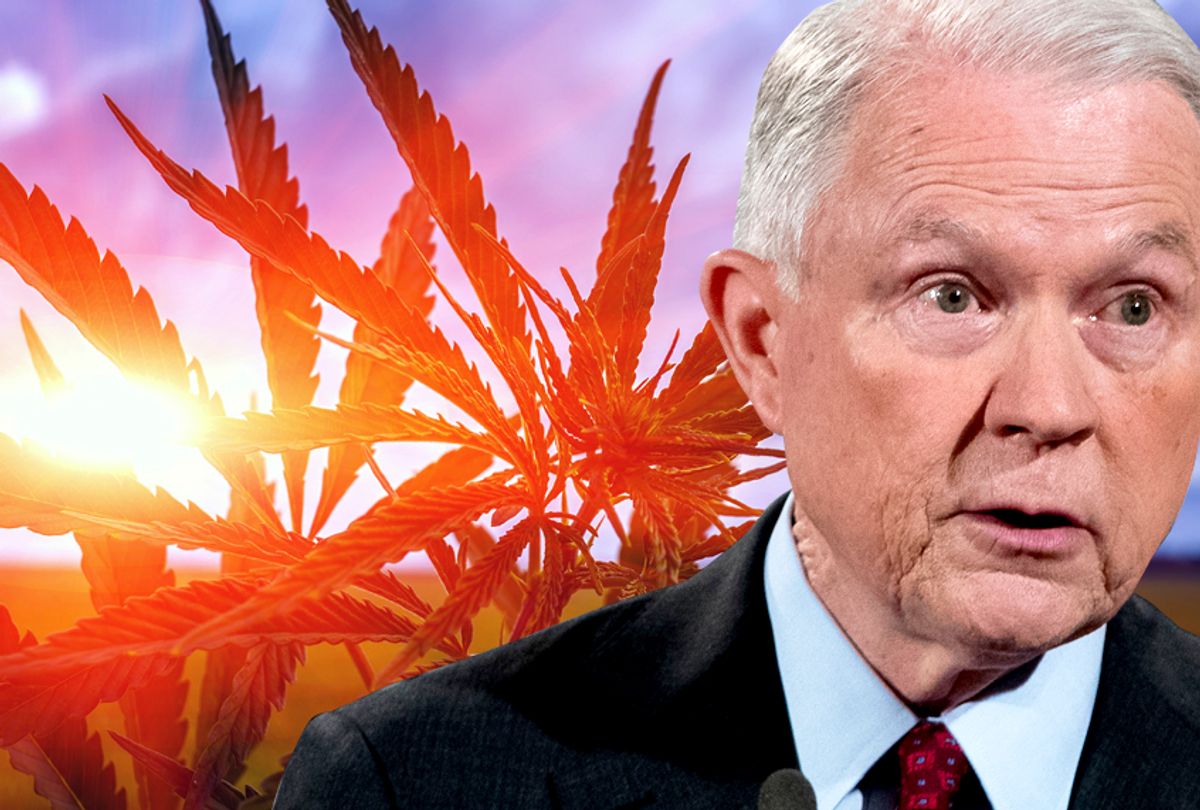 Attorney General Jeff Sessions' announcement Thursday that he is rescinding Obama-era guidance to federal prosecutors directing them to take a laissez-faire approach to state-legal marijuana except under specified circumstances (violence, out-of-state diversion, money laundering, etc.) is sending shock waves through the marijuana industry, but its impact is likely to be limited.

That's because marijuana prohibition is a dying beast, and while the twitching of its tail in its death throes could cause some injury, neither the attorney general nor his minions are going to be able to get that beast back up and roaring again. They are too late.

At least one of them recognized as much Thursday afternoon. Colorado U.S. Attorney Bob Troyer, a Sessions appointee, said within hours that there would be no changes in his office's enforcement priorities. He  would continue "identifying and prosecuting those who create the greatest safety threats to our communities around the state," he said, an approach "consistent with Sessions' guidance."

Sessions' move comes days after California, the nation's most populous state, began recreational marijuana sales, joining Alaska, Colorado, Nevada, Oregon, and Washington. Maine and Massachusetts have also already legalized marijuana, with taxed and regulated sales being just a matter of time. Washington, D.C., has also legalized marijuana possession and cultivation, although not sales, and another 21 states allow for medical marijuana.

More states are likely to legalize it this year (although the Sessions move could cause some hesitation at state houses), as even slow-to-act legislators eye marijuana legalization's ever-increasing popularity. The latest Gallup poll has 64 percent supporting legalization, suggesting that going after legal weed is likely to be a political loser.

Which is not to say that Sessions and the Justice Department can't do some serious harm. The mere announcement of the move saw marijuana stocks plummet in value Thursday. And unleashed federal prosecutors could attempt arrests and prosecutions of marijuana businesses. Even more dire, they could seek — and likely win — permanent injunctions in the federal courts shutting down state marijuana programs. They do, after all, violate federal law.

Such moves could totally disrupt legal marijuana regimes, shuttering pot businesses and turning off the pot tax revenue spigot, but they can't end legal weed. And Sessions' announcement doesn't mean he has ordered an immediate crackdown; instead, he has signaled to federal prosecutors that they are free to move forward against legal marijuana if and as they wish.

Even if they do, here are four reasons why Sessions' war on weed is a quixotic quest.

The federal government can make marijuana illegal under federal law and it likely has the ability to enjoin pot businesses and state regulatory apparatuses from selling, regulating, and taxing marijuana, but it cannot dictate to the states what their marijuana laws should be. In other words, the feds may have the ability to disrupt legal marijuana markets and states' ability to tax and regulate them, but not to make weed illegal again in California or any of the other states that have or will legalize it.

Just as the federal government cannot force states to recriminalize marijuana, neither can it force state law enforcement to enforce federal marijuana laws. With legal marijuana states extremely unlikely to give cops the go-ahead to enforce federal pot laws, that leaves the DEA. But there are only 4,000 DEA agents worldwide, and they have other pressing issues to deal with, such as the opioid epidemic, not to mention meth and cocaine. Even if every DEA agent worldwide dropped everything and rushed to California to enforce federal pot laws, that's only one agent for every 10,000 state residents. And that's just California. They could do exemplary raids on a token number of pot businesses, which could indeed have a chilling effect, but they will be unable to effectively enforce pot prohibition.

3. Shutting down legal pot regimes will only strengthen the black market.

Even conservative federal prosecutors will understand this. To the degree that the Justice Department is successful in shuttering marijuana businesses and squeezing off legal access to marijuana, it will drive marijuana consumers to obtain their weed elsewhere. That strengthens the black market and the very criminality that Attorney General Sessions rails against. For a law and order administration, policies that strengthen criminal networks are counterproductive.

4. The reaction is fierce, and only just beginning.

Trump, Sessions, and federal prosecutors are just beginning to get a taste of the condemnation the move is inspiring. Industry spokespeople are calling out the president for appearing to back away from the Trump campaign promise that marijuana legalization would be left up to the states, and a Republican senator, Cory Gardner of Colorado, has already announced from the Senate floor that he will place a hold on every Justice Department nomination until Sessions reverses course and lives up to what Gardner says was a promise to him not to reverse Obama-era policy.

Democrats are also hollering and screaming, and it's worth noting that more than half the Senate and more than a hundred House members now represent states that have legalized marijuana in some form, either medicinally or recreationally or both.

Jeff Sessions is leaving decisions about marijuana enforcement to his U.S. attorneys. They could impose huge disruptions on the legal, regulated marijuana business, which is bad enough, but they can't bring back pot prohibition. Sessions is fighting a lonely, rear-guard battle not even supported by his own party or the president he serves. It's a battle he will lose, although it could cause some casualties.