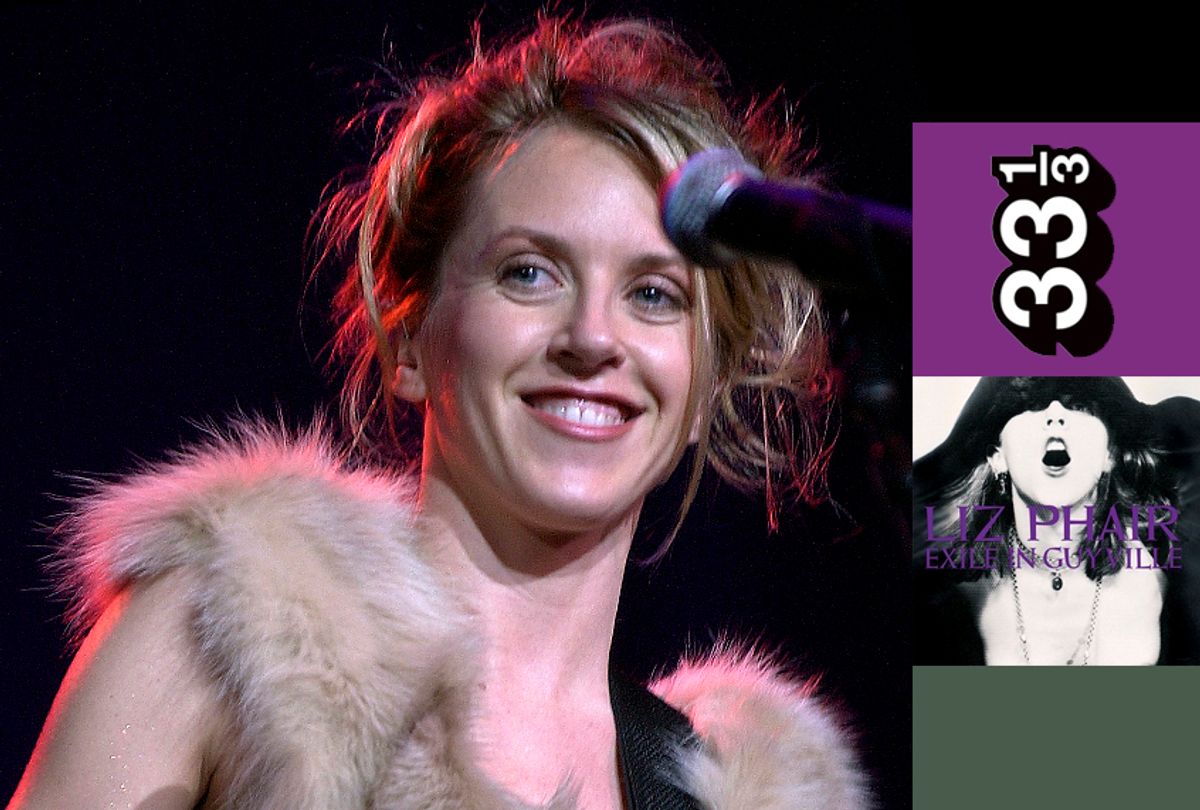 It was a time of incredible hope for a number of musicians, hope, and change, and brilliant fun, but it was also a deceptive time and a mean time, and an evanescent one. Today people look back and think it an era full of bold and witty musicians with integrity who made gritty, tuneful, roughhewn albums and who then travelled the country playing tiny clubs to warm little crowds of fans who hugged them afterwards in the afterglow of a big group consciousness. Them against the world. “Our little group has always been,” you know. And it was. But it was also a time veiled with the false consciousness that often cloaks artistic pursuits that at bottom are making someone some money. And if there is one way that the indie rock era failed in its promise of communal, anti-capitalist utopia, it was in its attitude towards women fans. As Liz put it:

[Guyville guys] always dominated the stereo like it was their music. They’d talk about it, and I would just sit on the sidelines. Until finally, I just thought, “[screw] it. I’m gonna record my songs and kick their [butt].”

As that image indicates, instead of embracing women, indie rock took its cues towards them from commercial rock, where the explicit exclusion of women audiences has been empirically documented. For example, Elizabeth Wollman’s study “Men, Music and Marketing at Q104.3” illustrates the way that commercial radio stations of the 1990s, by using gender-specific tactics and appeals, “consciously oriented their programming solely towards male listeners while simultaneously ignoring female listeners.” Wollman quotes the kind of masculine rhetoric heard on stations like WAXQ (104.3) in New York City, such as commercials that confused the word “variety” with “vagina,” which used the Primus track “Wynona’s Big Brown Beaver” as their in-joke text, or that had a “win a girl” contest on which men ridiculed women every Wednesday night by posing questions about orgasms and breast size—the type of chit-chat made popular on the Howard Stern show every morning.

Stations like these, Wollman explains, did so because they explicitly courted the lucrative male audience demographics.

In the case of Q104.3 heavy metal guitar solos were used in advertisements to attract and hold the interest of young, male listeners. Backed by busy, complicated sounding guitar solos, announcers praised skis, car dealerships, the Internet, sporting goods, beer, local restaurants, and Q104.3 itself. The preponderance of heavy metal in advertisements also worked to connect, in the listener’s mind, the station, the products it advertised and the music that served as its cultural product.

The station also simply didn’t play music made by women. According to the station manager of Q104.3, this was not a market-driven decision, but because such music was “bad.” “A lot of these modern women musicians just sound mad at the world—they’re just filled with rage,” a DJ told Wollman.

We don’t want that on our [current, classic rock format]. We want a more upbeat, positive sound. The previous format . . . played some women. They played Hole I think. But frankly, women just don’t play stuff that rocks all that hard.

What’s interesting about these comments—besides their specious implication that members of bands like Mötley Crüe are good musicians—is how closely they adhered to the indie rock aesthetic of the time, a place where I in my naivety thought things were different. An earlier generation’s warm welcome to musicians and singers like Patti Smith, Chrissie Hynde and The Raincoats had misled me into believing that gender wasn’t an issue in indie rock. Yet in fanzine pages and alternative press, indie rock writers praised the “musicianship” of acts like Big Black and ridiculed or stereotyped women in only slightly more subtle ways than those of commercial radio.

Into this world stepped Phair, a twenty-five-year-old from Chicago with a tape full of music that made fun of men. OK, it didn’t make fun of men per se—it merely shot holes in some of their pretensions. But even if you weren’t clear on her exact target, it was evident that she was taking ownership of a particularly male turf. Indeed, she claimed her work was a “response album” to The Rolling Stones opus "Exile on Main St.." Track by track, she said, she wrote the same songs, only from a girl’s point of view. She told Rob Joyner:

What I did was go through [the Stones album] song by song. I took the same situation, placed myself in the question, and answered the question. “Rocks Off’”—my answer to that is “Six Foot One.” It’s taking the part of the woman that Mick’s run into on the street. “Let it Loose”—okay, that’s about this woman who comes into the bar, she’s got some new guy on her arm, Mick was in love with her. He’s watching this guy, “eh, just wait, she’s gonna knock you down.” He’s talking, “let it loose,” as if to be like, babe, what the hell happened, talk to me. So my answer was, “I want to be your …” I put a song in there that lets it loose … [All the lyrics on the album] either had to be the equivalent from a female point of view or it had to be an answer kind of admonishment, to let me tell you my side of the story.

Of course, as good an origin story as this makes, another way of putting it was that Liz didn’t write an album about The Rolling Stones told from a girl’s point of view—she just wrote an album from a girl’s point of view. But that alone was novel enough to make the other claim seem plausible. True, there were songs on it called “Mesmerized” (a catch-word from “Rocks Off”) and “Flower” (which recalls “Dead Flowers”). Otherwise, it was hard for listeners to credit the claim. After all, Liz’s album contains no songs about heroin, and nothing remotely country, except some allusions to roadhouses. But the way she described her record really got people’s attention. Either it WAS a response to "Exile," or it wasn’t, but either way, it described life as girls like her were living it—exiled in Guyville for the duration.

Gina Arnold is a columnist at the East Bay Express in Berkeley, Calif., and the author of the book "Kiss This: Punk in the Present Tense" (St. Martin's Press).