A look into the numbers from the past year's extremist acts 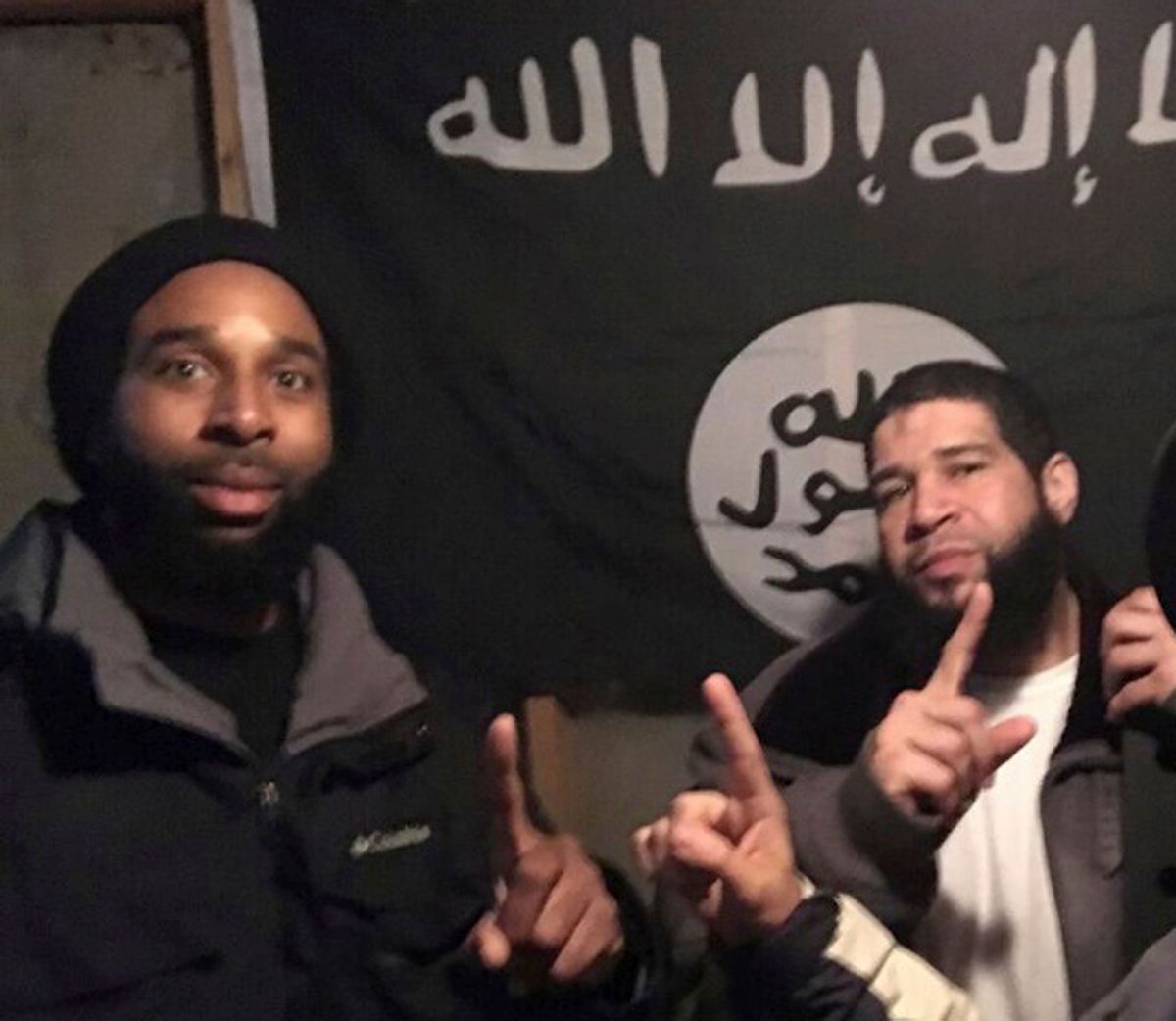 In this undated photo provided by the Federal Bureau of Investigation Joseph D. Jones, left, and Edward Schimenti pose in front of an Islamic State group flag. Jones and Schimenti were arrested by FBI agents on Wednesday, April 12, 2017 on terrorist charges for allegedly conspiring to support the Islamic State militant group. (FBI via AP) (AP)
--

Intense media coverage of a so-called “alt-right” rally in Charlottesville, Virginia, that turned deadly last August fueled the notion that far-right violent extremism in the U.S. in 2017 was a growing and severe threat.

But has it really increased?

To answer this and other related questions, we have been working on the open source Extremist Crime Database. For more than a decade, the authors have been collaborating with the National Consortium for the Study of Terrorism and Responses to Terrorism to systematically track the crimes committed by ideological extremists in the United States.

The far-right committed eight fatal attacks in 2017 that killed nine people, including the vehicle attack in Charlottesville.

Another attack involved a heated exchange over political ideology between a father and son, while a separate incident involving a xenophobic and racist tirade on public transportation in Portland escalated into a double murder.

Two other attacks took the lives of an Army lieutenant and a sheriff’s deputy.

The number of attacks in 2017 is only slightly higher than the average number of far-right homicides, 7.5, that took place between 1990 and 2016. There was an average of nearly 17 victims per year for the prior 27 years compared to the nine deaths in 2017. If the 168 murder victims of the 1995 Oklahoma City bombing are not included in the count, due to the unusually high number of causalities, there was an average of nearly 11 homicide victims per year from 1990 to 2016.

These numbers exclude fatal attacks committed by far-right extremists where there is no evidence of ideological motivation. One example of a nonideologically motivated far-right homicide is a school shooter in New Mexico whose motive still remains unclear. Of course, these numbers also exclude failed and foiled ideologically motivated plots committed by far-rightists. We are still in the process of identifying foiled plots since 1990. So far we have found many more far-right foiled plots than there are homicides.

This may suggest success on the part of law enforcement. One example of a far-right foiled plot involves three white supremacists who committed a shooting at a protest rally. They were arrested by police before they could hurt anyone and then charged with attempted homicide.

There is much consistency between the 1990-2016 and 2017 data. The distributions in ideology, geography, the offender’s and victim’s race and sex, and whether it was an isolated homicide or connected to other homicides do not differ in any meaningful way.

What was unique about 2017 was that there were proportionately more events where people other than the victims and offenders were present and more attacks on strangers. There were also more knife attacks. The average ages of victims and suspects were slightly older.

Extremist violence from other ideologies

Other extremist movements were also active in 2017.

Jihadis committed five homicide events in the United States with 17 victims, including multiple deaths from a vehicle attack and the killing of a police officer. While the far-right was more active, jihadis were more deadly, similar to previous years.

In addition, far-left extremists, including black nationalists, committed four homicides with seven victims including two police officers, with two other possible incidents still under investigation. This appears to be a possible shift because, until the last three or so years, the far-left mostly focused on property damage and was involved in few fatal attacks.

We also compared U.S. presidents’ first years in office, since critics suggested President Donald Trump stoked such violence. Extreme far-right homicides in 2017 were half that of President Barrack Obama’s first year in 2009 – eight versus 16, respectively. On the face of it, it appears the election of America’s first African-American president may have mobilized far-right extremists more than a president perceived by some as sympathetic to their grievances.

Our data show that based on frequency alone, 2017 had an average number of far-right ideologically motivated homicides. It also had far fewer than the peak of 19 incidents committed in 1999. That year, portions of the far-right movement were consumed with the end of the millennium. A combination of the fear of mass technological failure, as well as religious beliefs related to the Christian apocalypse, may have created a climate that increased the motivation to act during that period.

When considering patterns across time, however, there was a 100 percent increase in activity from 2016 to 2017. That’s the same percent change seen from 2008 to 2009, during Obama’s first year in office. These first years of the Obama and Trump presidencies constitute an atypical increase in far-right extremist mobilization toward violent criminal activity.

Here’s another interesting question: If the number of fatal far-right extremist attacks in 2017 was average, why is there a perception of an increase?

Ideologically motivated homicides are not the only way to measure extremism. For example, failed extremist attacks and other nonfatal criminal activities, like aggravated assaults, could impact both media coverage and public discourse on far-right violence.

In addition, our data only highlighted crimes. Legal activity by extremists, such as the polarization of campus speaking events, rallies to protest the removal of Confederate monuments and the propagation of far-right memes through social media could be driving this perception.

Similarly, we have not looked at overall bias incidents. These include discriminatory crimes against racial, religious and other social groups that may be committed by persons associated with extremist movements.

Finally, research shows that attacks by one type of extremist movement can impact the behavior of other ideological extremists. Since the far-left and jihadi inspired offenders were also active in 2017, there may have been increased attention on extremism, generally.

In many ways, an “average” year demonstrates the perseverance and deadliness of far-right extremism, with its fringe ideology continuing to appeal to a minority of Americans. For decades, it has adapted to cultural and technological shifts in American society, for example, utilizing the internet and social media for recruitment and the proliferation of extremist ideas.

Far-rightists also pose a grave threat to racial, ethnic, religious and other minorities in the U.S. Whether they are wearing white hoods and burning crosses or wearing button-up shirts and carrying Tiki torches, the underlying ideological tenets of racism, sexism, anti-Semitism, paranoia and anti-government sentiments pose a violent risk to the American public.

William Parkin is an associate professor in the Department of Criminal Justice at Seattle University and co-investigator for the U.S. Extremist Crime Database.