It's time to tear down the music festival boys club

The 2018 Bonnaroo, Firefly and Governors Ball lineups are more male-dominated than ever — change is necessary 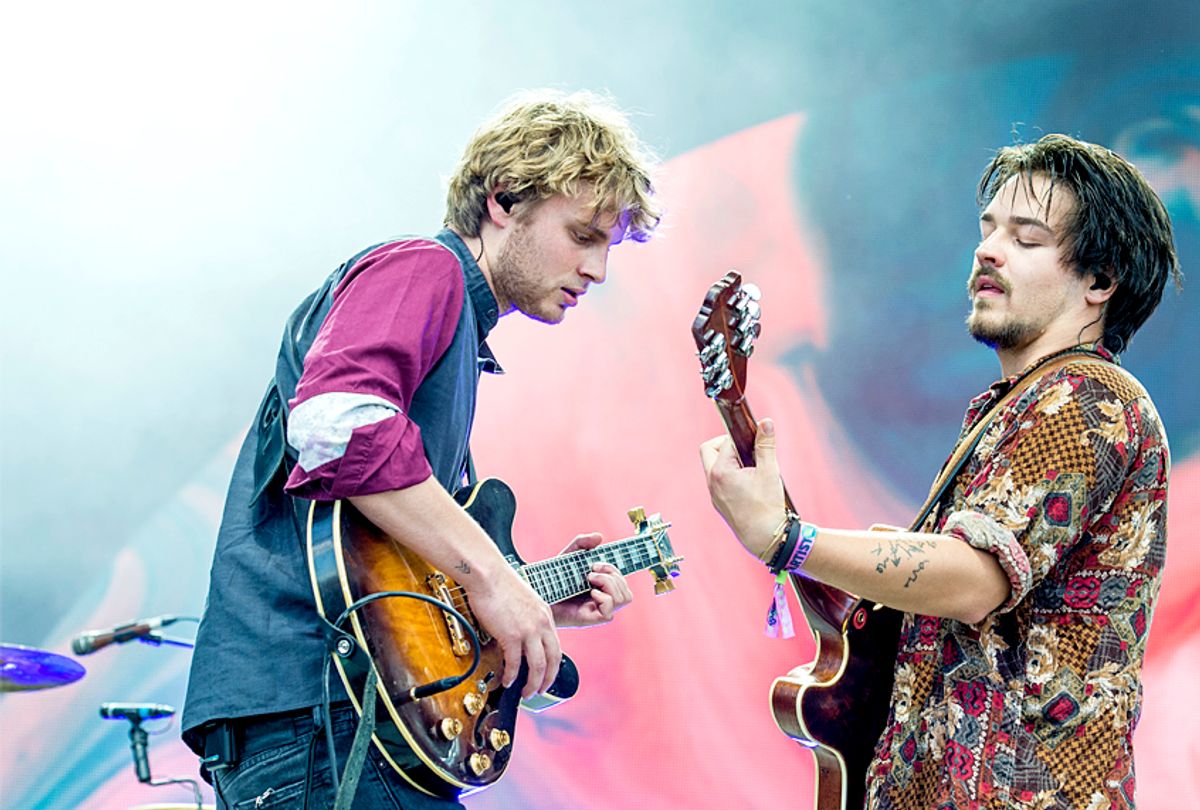 Even though much of the country was in a deep freeze during the first week of January, there was at least one ray of sunshine: the 2018 Coachella lineup announcement.

Although this year's crop of acts was polarizing to some — for example, many rock fans grumbled about the lack of bands booked — it's difficult to quibble with Beyoncé and the Weeknd as headliners, and an eclectic undercard headed by St. Vincent, SZA, HAIM, Odesza, Cardi B, David Byrne and Fleet Foxes.

However, in the ensuing days, as more festival lineups rolled out, things started to feel more homogenous — and male-dominated. That's nothing new, of course: The Huffington Post conducted analysis of 10 major music festivals in 2016, and found that just 12 percent of acts booked were solo female performers or groups featuring all women, and 10 percent of groups were of mixed gender. Pitchfork's analysis of 23 2017 festival lineups (which added up to 996 acts) wasn't much better: 14 percent of these acts were female, while 12 percent were groups comprised of male and female (or non-binary) members. The interactive data map of 2017 festival lineups Pitchfork produced underscores just how imbalanced things were.

The lack of festival gender parity has been even more striking in 2018. Of the first 20 announced acts for New York's Governors Ball, which is headlined by Eminem and Jack White, 15 acts are men or male-fronted. Only Yeah Yeah Yeahs, Halsey, Chvrches, Sylvan Esso and Maggie Rogers buck this trend. Alabama's Hangout Festival has three male headliners — Kendrick Lamar, the Killers and the Chainsmokers — and just two women (SZA and Halsey) represented in the next 11 acts.

Things came to a head when Bonnaroo's lineup emerged. Of the acts listed in the first 10 rows of the poster — representing more than 40 performers, including (male) headliners Eminem, Muse and the Killers — there are only seven women-identifying artists or women-led groups listed: Paramore, Dua Lipa, Sheryl Crow, Alison Wonderland, First Aid Kit, Billie Eilish and Tash Sultana. (Several acts within these rows, including Broken Social Scene, Sylvan Esso and Chic featuring Nile Rodgers, do have a mix of genders, however.)

That 2018's festival lineups feel stale and uninspired certainly hasn't escaped notice — although, to be clear, it's a problem with the cumulative booking choices, and not a comment on the quality of any individual acts. Kendrick Lamar is one of the most riveting live performers of today and deserves to be a headliner, while Muse and the Killers have the kind of ambitious execution necessary to close a show.

Still, it's impossible to ignore how obvious it is that festivals are neglecting non-male acts. Earlier this week, several journalists started circulating the Twitter hashtag #letwomenheadline to draw attention to the imbalance. And upon seeing the Jan. 11 lineup reveal for Delaware's Firefly Festival — yet another sausagefest — Halsey tweeted, "Damn guys come onnnnnn. Where the women at. This was one of my favorite festivals I’ve ever played and it’s a shame there’s not more females on the bill. With the exception of (the amazing) SZA, the first like 20 acts on the bill are men. It’s 2018, do better!!!"

When major acts playing these festivals are calling them out for a lack of gender diversity, that should be embarrassing enough to spur on changes. But there's good reason to think shame won't be a strong enough impetus, in large part because money talks and many major festivals are economic juggernauts, no matter who's performing. According to Pollstar's Year End Worldwide Festival Grosses chart, Coachella grossed a whopping $114.5 million in 2017, an increase of 21.63 percent over 2016. A 2015 report, meanwhile, found that Insomniac, the promoter behind the EDM-focused Electric Daisy Carnival events, generated $3.2 billion in economic activity in the U.S. from 2010 t0 2014.

What's frustrating is that major festivals are cognizant of gender-related lineup critiques. Chris Sampson, the executive vice president of programming for Superfly (which handles Bonnaroo and Outside Lands) told Huffington Post in 2016 that "we're very aware of the gender imbalance. We try to book the best festival that we can every year. We want the best artists out there, at every level, male or female." In the same piece, Insomniac's founder and CEO, Pasquale Rotella, said, "We don’t book our festivals based on gender; it’s all about good music, but that music needs to make its way to us."

That last aside hints at some of the disconnect in play. In a perfect world, the best artists being heard by the powers that be would represent a diversity of genders and perspectives. However, festivals also reflect mainstream music culture, which has also skewed disproportionately male as of late — particularly in 2017, when pop charts, radio airplay, holiday concerts, and awards nominations had a disheartening lack of women or non-binary artists at the forefront. When gatekeepers elevate male voices, or artistic discourse is dominated by men, it trickles down and permeates all aspects of the music experience.

To be fair, plenty of factors explain the composition of festival lineups. Absent artists might be taking time away from touring to make a record; some acts might prefer to embark on their own tours; others might be on existing tours that just so happen to be routed away from festivals. (Kesha and Macklemore's joint summer trek comes to mind.) And then there are things like business-related factors — such as radius clauses, which prevent acts from playing certain cities for a period of time, or exclusivity agreements -- or financial considerations, such as budgets or guarantees. Booking festivals is a difficult and stressful task; that's not in dispute.

However, it's a cop-out to blame gender disparity on the premise that there just aren't enough women-driven projects available to populate the upper echelons of festival lineups. In fact, 2017 felt like a watershed year for both artistic quality and social change, as Ann Powers pointed out in an NPR Music piece, "Don't Call Me Honey: In 2017, Women Confronted The Deep Roots of Rock's Boys Club":

All over the musical spectrum, from the political punk of Priests to the bedroom Big Star-isms of Waxahatchee, from Lorde's indie-leaning pop to Jay Som's homemade intimacies, from Kesha's glossy boogie to Hurray For the Riff Raff's deep inquiry into roots music, women are the ones taking rock's helm, and often, calling out male oppressors and violators.

Applying this kind of tables-turning to festivals has a tremendous upside. Landing a spot at a coveted festival is akin to a string of gold stars or a seal of approval, as well as a highly visible way for artists to cut through the noise. Ensuring women and non-binary artists are put in position to earn the greatest amount of mainstream exposure raises the bar for everyone.

Of course, highlighting these artists is a delicate balance. After all, veering into pandering tokenism also doesn't help anyone. Moogfest came under fire in December, after former Chairlift leader Caroline Polachek (who now records as CEP) objected to being part of an initial lineup announcement that chose to highlight only "female, transgender, and non-binary innovators."

"This is a gender-mixed festival where certain artists have been marched to the front of the line and paraded out together because they’re female / gnc [gender nonconforming]," Polachek, who wasn't aware in advance of how the billing was being framed, said in a statement. "This speaks not to the artists or their music, but to the politics of the festival and self-congratulatory PR. To do this without permission from the artists on display is exploitative and unprofessional."

With the 2018 festival lineups rolling in, perhaps it's time to stop trying to figure out why lineups are lopsided — and start figuring out what to do in response, whether it's boycotting attendance or coverage, asking performers to use their platform to push for festival gender equality, or working on solutions directly with festivals or bookers. On a grassroots level, fans might choose to support bands that spend summers trekking through clubs, or attend more niche festivals that are doing good work — such as Red Bull Sound Select's "30 Days" city series, the eclectic New Orleans Jazz & Heritage Festival or Pickathon in Oregon.

Year after year, it's exhausting and frustrating to see a lack of improvement in lineup parity -- and to still have a need to crunch numbers, examine gaps and try to figure out why festivals aren't booking more women and non-binary artists. But with the groundswell of people surging to wrest control of power dynamics in workplaces, media and politics, it feels more urgent than ever — if not overdue — to reshape the festival narrative into something marked by equality, not disparity.