His racist attacks give us insight into his own shortcomings 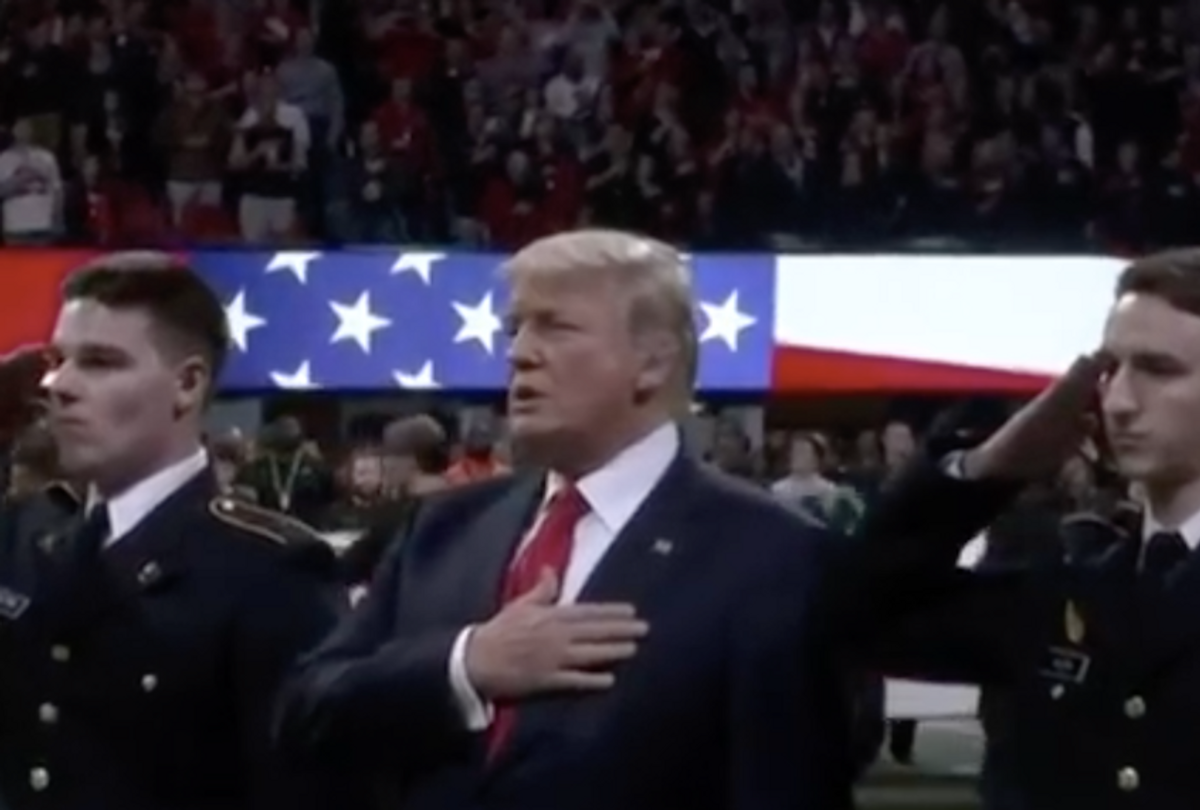 Donald Trump doesn’t know the words to the national anthem. There was some evidence of this as far back as Memorial Day, when during an otherwise solemn Arlington Cemetery ceremony for fallen soldiers, Trump belted out select lyrics to “The Star-Spangled Banner” exactly like someone who oversings the only parts he knows. It happened again at the NCAA title football game Monday night, when Trump mumbled and stumbled his way through the anthem, falling out of step with the words here, keeping conspicuously mum there, and only convincingly singing along after the song’s climax. (In both instances, “rockets' red glare” seemed to be where Trump’s lyrical knowledge finally kicked in.)

For a president not to know his own nation's anthem seems both an embarrassment and a shame, emotions that require a kind of self-awareness Trump is incapable of feeling. But this president’s failure at knowing the anthem is especially galling, since he’s made the song such an indispensable weapon in his racist culture war.

It should be obvious by now that everything Trump excels at is also a case-in-point of why he’s so awful. He insults women like a true-blue misogynist and lies like a con-man possessed of a singularly profound dishonest streak. An inveterate racist, his bigotry is so virulent, it makes itself apparent in almost every outburst, both online and off. He deftly invokes tired but politically efficient African-American stereotypes both because he genuinely believes them and to remind his supporters their racism is justified, and reflexively condemns black people, always with an eye toward humiliation. And yet, as we’ve seen time and again, Trump embodies all the worst traits he erroneously faults in "the other." His attacks on, and proposed correctives for, black folks’ behavior are actual reflections of his own failings. The subtext of every racist Trump utterance inevitably turns out to be a truth about himself.

It is not difficult to find examples. There’s Trump’s more than two-dozen tweeted gripes about how much time President Obama spent golfing and vacationing, which lean hard into the “lazy black people” trope favored by white racists. As of last August, Trump had already chillaxed three times as many days as Obama had the entire first year of his presidency, and a new Axios report finds this shiftless president is too busy watching TV in bed, tweeting and chatting on the phone to get to work before 11am. (Obama worked out in the early mornings and got his first briefing—in actual written words, not pictures—by 8:30am.)

Trump regularly accuses black people of stoking racial fires even as he retweets white supremacists, labels neo-Nazis “very fine people,” propagates fake statistics exaggerating black crime rates, and elevates alt-right leaders and racist “Chicago” dog whistles about black violence (sometimes in the very same tweet!). He has come time and again for Colin Kaepernick and other NFL players kneeling to protest police brutality, once disparaging them as “sons of bitches” who should be “fired” for their “disrespect.”

On Monday, Trump fired off yet another tweet targeting the players and using the anthem as a political and cultural signifier. “We want our flag respected - and we want our NATIONAL ANTHEM respected also!” Trump wrote, implicitly contrasting a patriotic (white) “we” against an unpatriotic (black) “them.” The message posted just a few hours before Trump took to the football field in Atlanta and mangled a national anthem that Kaepernick and Obama undoubtedly know by heart. Given weeks of advance notice that he would be singing live on television, Trump still didn't bother dedicating one of his leisurely mornings to committing the whole song to memory. Some patriot. Some “very stable genius.”

This latest Trump anthem flub was funny in meme form, but depressing in the wider context of this whole godawful presidency. Sure, it’s absolutely possible that Trump once knew the lyrics to the anthem, but simply forgot them in the moment—twice. While that might make his flub more excusable, it also makes his presidency more terrifying, considering the questions about mental competencythat have dogged him as of late. (And particularly since he seems to have perfect recall of Smash Mouth’s “All Star,” which has not been designated a national song by any official body.) Far more likely, Monday night’s pathetic display was just another reminder, as if it were needed, of this president’s fraudulence and basic incompetence. It was Trump inadvertently demonstrating his ethos of office and a fundamental belief of his base, which is that someone else deserves the blame for your difficulties and failures, and that person is by default black or brown.

Hypocrisy is a cornerstone of racist thinking, and of Trumpism as a political movement. How else to explain the rush of white conservatives applauding his performance? These same people refuse to acknowledge the extrajudicial murder of a black man when it’s captured on camera, but they’ll make any excuse for Donald Trump miserably failing to sing a song they claim to cherish.

And the garbage heap rises.