Want to know how low Trump can go?

Sit back and watch him dig his hole 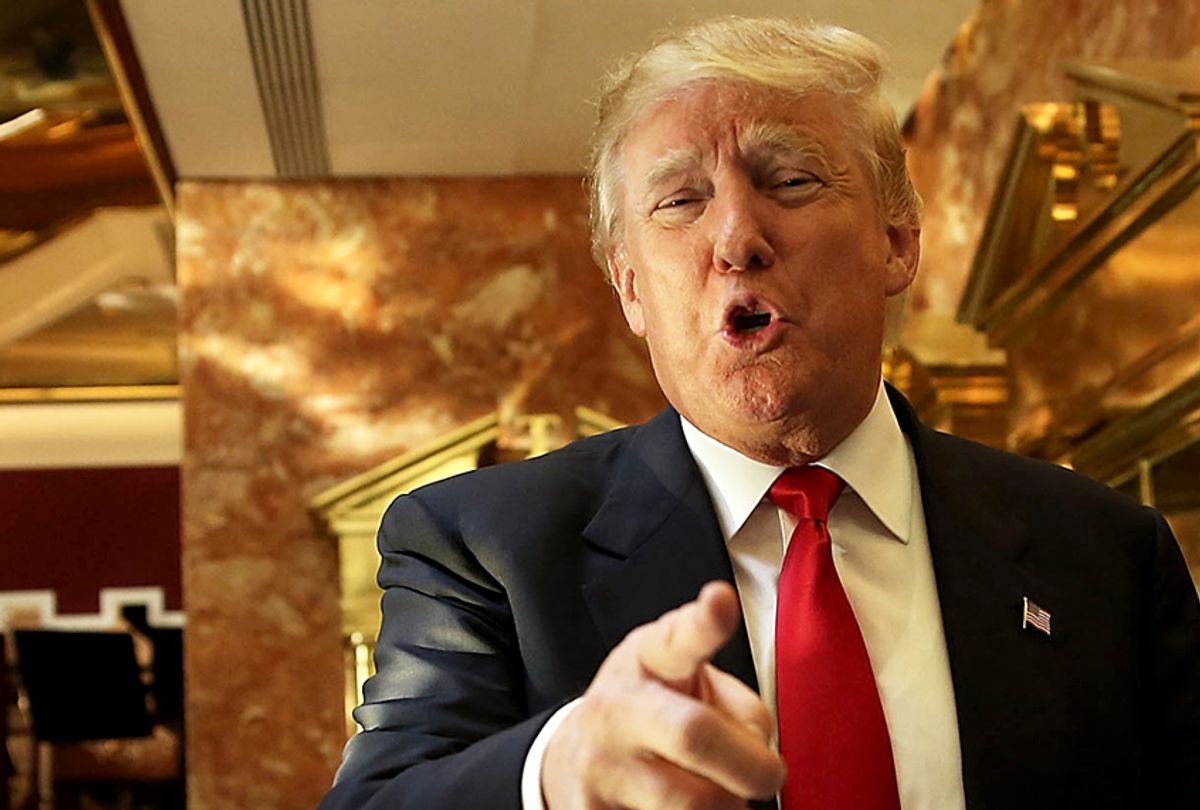 You should trust Donald Trump when he talks about shitholes. He knows all about them.

Let’s start with that thing with lips and teeth between his nose and chin from which he constantly spews racist hate and ignorance. He was a racist the day he announced his candidacy on June 16, 2015, taking the escalator down to the ground floor of Trump Tower where he stood before a crowd of hired extras to tell the world that immigrants from Mexico were rapists and drug addicts. But he’d been a racist for years, pushing the odious “birther” conspiracy, that President Obama wasn’t born in the United States, he was born in Kenya, and he wasn’t a Christian, he was a Muslim. There was Judge Curiel, who was hearing the lawsuit against him for Trump University, who Trump said couldn’t be fair because of his Mexican heritage, even though he was born in Indiana to parents who were naturalized American citizens. And of course there were the “very fine people on both sides” of the demonstrations in Charlottesville last summer. One side was neo-Nazis, KKK members and other white supremacists, the side with the demonstrator who ran over and killed a counter-demonstrator with his car. The other side was there to oppose their racism.

It’s the same hole that’s uttered more than 2,000 misstatements of fact, disinformation, and outright lies since he took office, according to the Washington Post. Russia? What Russia? Nobody on his campaign had any meetings with Russians, according to Trump at his press conference last Feb. 16 in the East Room of the White House. He sent Sean Spicer and other factotums out day after day to deny that there were any contacts between Trump people and Russians. Then they admitted there were meetings with Russians, but they weren’t about the campaign. Then came the revelation about the Trump Tower meeting with Russians, which was about the campaign, and they stopped denying they had met with Russians. And then came the statements over and over (more than 25 by Trump himself last week alone) that there was “no collusion” with Russia.

Trump claimed he won the largest electoral victory since Reagan (he didn’t). He said 3 million people voted illegally against him (he lost the popular vote by 3 million uncontested votes). He said Obamacare “covers very few people” (more than 20 million uninsured citizens gained health insurance under the Affordable Care Act). He claimed repeatedly that Obamacare is “failing” (record numbers registered last year). We could go on, but why bother? He’s spewing 5.6 lies a day, according to the Post. There will be more tomorrow, and more the day after that.

He’s also telling you who he is with where he chooses to live.

Take a gander at his apartment in that hole in the sky called Trump Tower. He didn’t go out and look for a rental or buy a condo. The man put up a building on Fifth Avenue so he could build an apartment in it. We’re talking about a whole new level of statement-making here. The place practically screams this is who I am.

Said to be worth as much as $100 million, just from the photos, the only comparison I can think of is to the three Saddam Hussein palaces I visited in Iraq. There are wonders in every room that’s been photographed, but the living room stands out. The words “living room” imply the place where you sit down and relax after work, maybe read a magazine, talk to your wife, play with your kids. You actually “live” there. You sit on the couch and talk to the neighbor sitting across from you. Only in the Trump “living room,” the overstuffed damask and fringed sofa across from you is 25 feet away. You might have a hard time seeing that neighbor, too, because you’ll be blinded by the light from the six-foot crystal chandelier reflected off all the polished marble and gold leaf. Marble floors. Marble walls. Marble pedestals for marble columns. Gold-leafed filigreed capitals. Gold-leaf crown moldings and coffered ceilings painted with scenes of Greek or Roman gods gamboling amid clouds and rearing horses and chariots. Gold-leaf arms and legs on Louis XIV damask-upholstered chairs. Two thick glass coffee tables sitting atop gold-leaf circular filigreed pedestals topped with gold candelabras. A few orchids and palms scattered here and there along with a custom-made toy Mercedes push-car for Barron, the room’s single “homey” touch.

The Trump “winter White House” at Mar-a-Lago is another hole into his soul. Built by cereal heiress Marjorie Merriweather Post in the 1920s on the beach in Florida’s exclusive Palm Beach, the place is a clash of Spanish, Venetian and Portuguese styles with marble columns, coffered ceilings and gold and crystal chandeliers. It has 58 bedrooms, 33 bathrooms, and three bomb shelters. Trump bought it in the mid 1980s and when he went through one of his periodic “financial difficulties” in the ’90s, converted it into a private club with a buy-in fee of $200,000 and annual dues of $14,000. Staying overnight costs as much as $2,000.

Did you see the photos of members swanning into the place on New Year's Eve? The going rate this time around was $625 for members and $750 for their guests, a drop in the proverbial bucket compared to what they spent on their outfits — furs and floor-length gowns and jewels and silicone and hairspray. They’re like hired friends, extras in Trump’s reality show of a life. Deploy them around the Mar-a-Lago ballroom and he can walk among the tables, acknowledging the applause with a wave and an off-hand comment about how “richer” he just made them with “tax reform” that he advertised as anything but a tax cut for the rich.

That’s the thing about Trump. Every time he sees a hole, he steps in it, and every time he opens his mouth, he gives Special Prosecutor Robert Mueller something to dig into. In his interview with the Wall Street Journal the other day, Trump went all apoplectic about the FBI agent who sent tweets to his significant other supporting Hillary for president. “By the way, that’s a treasonous act. What he tweeted to his lover is a treasonous act,” Trump claimed.

Who knew you could betray your country with a smartphone? With Trump, you learn something new every day. The only question now is how many days he’s got left.