American global "leadership": Under Trump, now less than ever

On North Korea, Iran and Israel, the U.S. claims leadership. In fact, Trump is presiding over an inevitable decline 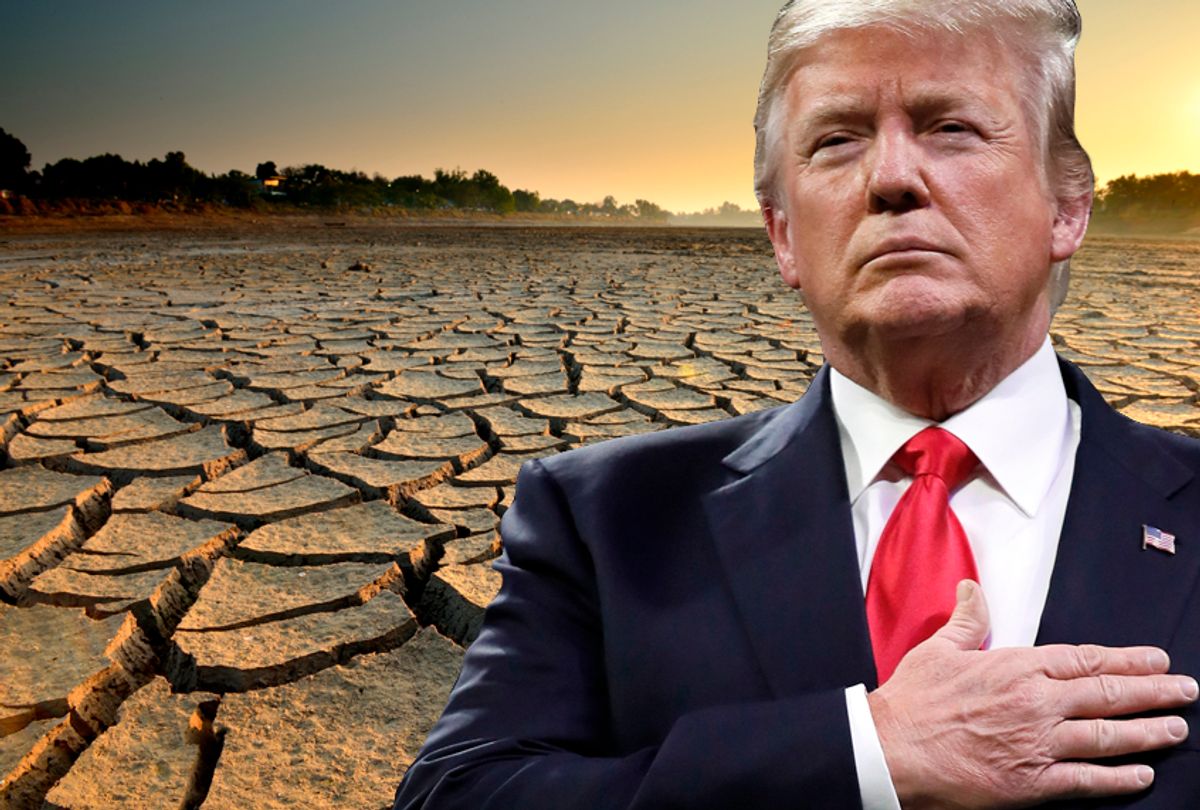 I think about “U.S. leadership” a lot these days. Well, I have considered this topic more or less daily since the Cold War ended, and especially since the events of Sept. 11, 2001: The fate of American power is the decisive question of our time. Of late everyone seems to be thinking and talking about it. The Trump administration has taken to asserting American leadership routinely. Then there are the Democrats and the never-Trumpers: They are irate because the president is ruining America’s global position. What is what with “U.S. leadership?”

Let us think this over. We are midway in an important point of inflection, if I read things rightly.

“World leader” seems to be inscribed on the Trump administration’s calling cards — the work of the generals who direct his administration on the foreign policy side, in my read. It has for many months claimed a leadership role in a “maximum pressure” campaign against North Korea in response to its missile and nuclear programs. Lately the administration has called on other nations to “stand with the Iranian people” as they protest against corruption and economic deprivation. Now it wants the accord governing Iran’s nuclear accord rewritten. At the extreme there is the decision to recognize Jerusalem as Israel’s capital: Team Trump is nothing if not out front in this case.

In swoop the Democrats. Last Wednesday their Senate foreign relations staff released a report purporting to detail “Vladimir Putin’s nearly two-decades-long assault on democratic institutions, universal values, and the rule of law across Europe and in his own country.” We Americans seem to have an endless appetite for evidence-free manifestations of paranoia of this kind. It is politically useful, among other things. But note the “across Europe.” The Democrats now propose to internationalize and institutionalize the theme. The report — here is the Senate’s summary — calls for yet another American-led “international coalition,” among its 30-odd recommendations. It wants “an annual global summit” to counter “all forms of Russian hybrid threats.”

You can read that last sentence again if you like. I’ll wait. Annual Russia–Russia–Russia summits chaired by Americans, given that no one else could conceivably take up such a task: Now this, readers, is American leadership in its very finest hour.

Quiz question: Apart from the intervening decades, how much distance is there between Joe McCarthy and Sen. Ben Cardin of Maryland, the Democrat who initiated the Russia-themed report? I will watch the comment thread, per usual.

Washington is on a leadership binge, let there be no question. And it is always the same in these cases. The man constantly citing books and dropping names is certain to be badly read and poorly connected. “He who speaks does not know, he who knows does not speak,” as Lao Tzu had it. Our policy cliques and politicians noisily assert and claim American leadership precisely because it ebbs before our eyes. This is not Donald Trump’s doing. He happens to be in the White House, and the drift has his mark on it. It is history come a-knockin’, and our leaders — all of them — decline to avail of constructive responses. Under another president it would merely look different.

If there is one thing we all ought to know about our time, I have just described my nomination.

Richard Haass, the liberal interventionist who now heads the Council on Foreign Relations, made a pertinent remark the other day in an interview with Mike Allen, the former Politico reporter. “Trump is the first post–World War II president to view the burdens of world leadership as outweighing the benefits,” Haass said. “The United States has changed from the principal preserver of order to a principal disrupter.”

There are a couple of things to unload from this observation.

The first sentence is merely a veiled complaint that Trump does not favor the incessant interventions people such as Haass, who is of the Clinton stripe, consider central to America’s conduct abroad. There are few things to say in favor of Donald Trump, but this is one of them. To an extent it is difficult to determine with precision, his administration’s unruly threats of force against others are the work not of the president but of the aforementioned generals who surround him.

The second assertion is key. Haass smudges his chalk when he equates U.S. leadership with its purported role as “the principal preserver of order.” This tiresome trope is the very fulcrum of the liberal interventionist position — the “indispensable nation” bit: It is we or it is disorder. It is hopeless. Look out your window, readers. If you see an orderly world, it is again the comment box for you.

The best comeback on this point belongs to David Stockman. Remember him, Reagan’s truth-telling budget director, who the Gipper spanked behind the woodshed? “Exactly what hay wagon does he think we fell off of?” Stockman asked of Haass in a good piece the other day.

The Trump administration has imposed unilateral sanctions against North Korea four times in the past year and gone to the UN for multilateral measures three times. It proposed some kind of global gang-up on the Rouhani government in Tehran as soon as demonstrations began in the last days of December — the obvious object being to advance the administration’s case against the nuclear accord. On Friday it demanded that the other five members of the group that negotiated with Iran rewrite the agreement within 120 days or Trump will rescind it unilaterally. While this administration stands pitifully alone on the Jerusalem question, it also professes certainty that others will eventually “recognize reality” and follow.

This is how the Trump administration addresses the question of U.S. leadership. It proposes to preserve it by bluntly, frontally reasserting it — the “with us or against us” approach. Look at the list and you see the fundamental miscalculation. The rest of the world, notably China, supports North Korea sanctions only insofar as they are conducive to negotiations — no further. Seoul and Pyongyang are now talking directly while pointedly excluding Washington. I have heard no peep from any quarter about any anti–Iran coalition in response to Tehran’s protest problems, and there is next to no chance either Iran or America’s negotiating partners will agree to reopen the nuclear pact. The Iranian government said on Saturday there is none. As to the Jerusalem question, the problem with reality lies with the Trump administration.

What about those who oppose Trump?

I do not see that the liberal interventionists object to any of these policies — not if one goes by their underlying intent. Nor do I find this a surprise. Given who appears to shape administration policy, the objectors tend to focus sharply on Trump himself. It is not what the administration is doing, in other words, so much as Trump’s stated opposition to interventionist wars, his desire for more rational relations with Russia, and his willingness to negotiate with adversaries such as the North Koreans. The object is to extinguish all such thoughts in a campaign to protect interventionist ideology from all questions.

The above paragraph bears brief explanation. The interventionists are emphatically on for the provocations in Northeast Asia, given they are as frightened of the negotiating table as Trump’s generals — with whom they appear to be well at home. In the case of Iran, they nurse every bit the administration’s irrational hatred but view the nuclear accord as tactically useful. As to the Jerusalem policy, yes, they stand decisively against it. Do they, too, favor a settlement that permanently disadvantages Palestinians to Israel’s benefit? I need not supply an answer.

On the other side of the ledger, is the rest of the world going to sit in amphitheaters annually and partake of America’s Russophobic obsessions? I am offering odds on this one. No one is interested in Washington’s notion of an Age of Enmity that never ends. There is an understanding of interdependence abroad that Washington appears to have no grasp of whatsoever.

All the current talk of leadership betokens a crisis to which no one in Washington has a sound, imaginative response. The administration tests its power to lead on the ground and the results come up short, the ensuing silence notwithstanding. Big-think theorists argue for a restoration, but what chance do they have of persuading others that the postwar disorder before us is to be seen as order? The past is past, night is still night and day, day. The world turns, as it plainly wants to.

The principal problem, in my view, can be stated in a single word: pretension. By this I mean the pretension to success, the pretension to enjoy the willing allegiance of others, the pretension that the world can proceed in no fashion other than what Americans determine is best. There is a lot of this around these days. It seems, indeed, to be the very fuel on which Washington runs. And if you assume I refer only to the man who would make America great again, think again: His apoplectic adversaries on “the left” — I cannot use this term in the American context without quotation marks — are at least as pretentious as the president. I would argue more so.