Trump's first year has been the private prison industry's best 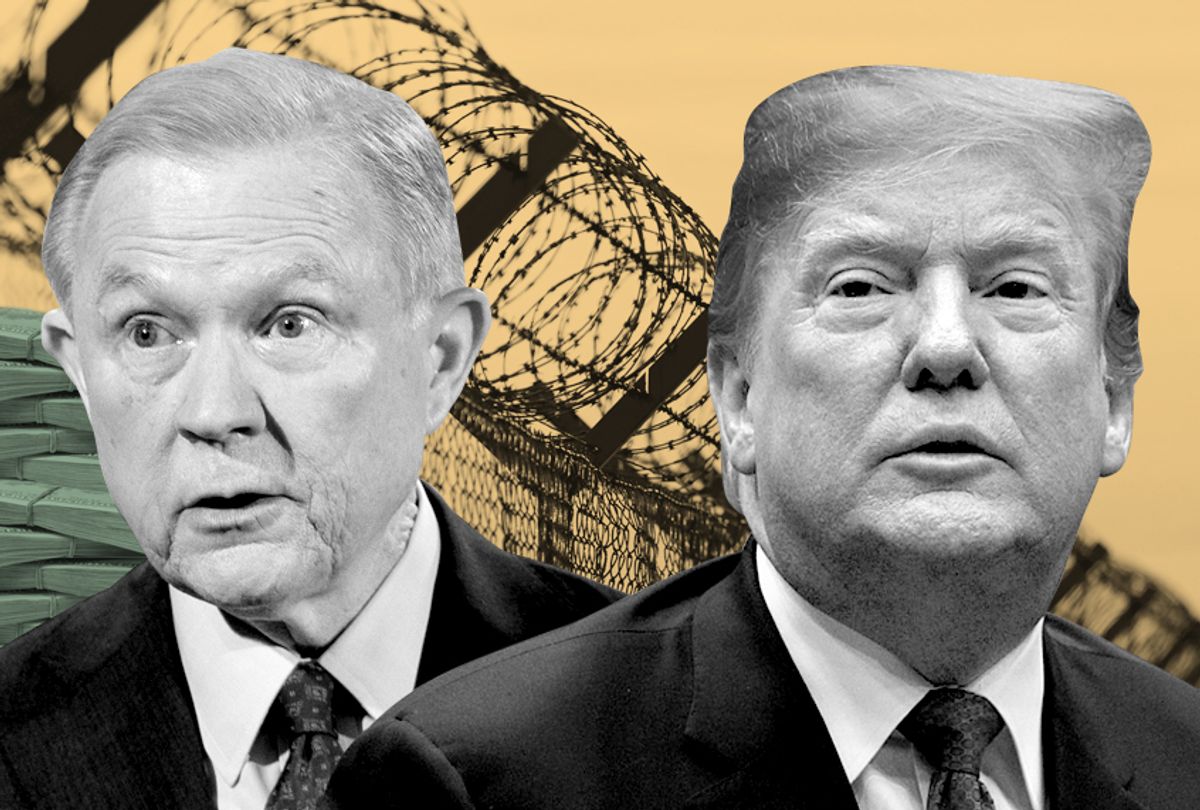 Exactly 17 months ago, in August of 2016 -- back when most election polls had Hillary Clinton clinching the 2016 presidential election -- the Obama administration announced that it would end the Justice Department’s (DOJ) reliance on private prisons. The announcement came seven days after the DOJ’s inspector general (IG) called on the federal Bureau of Prisons (BOP) to more rigorously oversee its contracts with private prison companies. The IG’s report found that private prisons at the federal level consistently fail to measure up to federal standards in preventing dangerous conditions, intercepting contraband, and ensuring internal accountability for staff misconduct.

CoreCivic and GEO Group’s stocks both ended the day down more than 35 percent and 39 percent, respectively -- an indication that the nation’s largest for-profit prison corporations' profitability might be on the wane. The day after the announcement, GEO Group CEO George Zoley stated in a conference call, “There’s been an overreaction to the news about the contracts. We think, in time, this will correct itself.” Even George Zoley couldn’t have predicted today’s turnaround.

With the election of Donald Trump to the White House a few months later, Zoley’s prescient statement of an “overreaction” made him look like a fortune teller.

On Nov. 7, 2016, when the closing bell of the American Stock Exchange rang and before any sense of who the 45th president of the United States would be, CoreCivic traded at 14.36 and GEO Group stood at 15.93. Following Trump's electoral victory, private prison company stocks skyrocketed. Today, CoreCivic is trading at  23.19 (a 61 percent increase) and GEO Group is trading at 23.03 (a 45 percent increase). And for good reason. The Trump administration is a godsend for the private prison industry.

First, there is the dangerous and misguided rhetoric that President Trump and Attorney General Jeff Sessions constantly spew -- despite evidence to the contrary -- about how the nation’s violent crime rate is rising and America’s streets are filled with carnage. Second, along with this bombastic language are their calls for harsher sentencing and draconian enforcement of drug and immigration offenses. Third, federal spending on private prisons has remained steady, despite Republican support for across-the-board budget cuts to other federal programs. Trump’s proposed fiscal year 2018 budget calls for $1.2 billion in new spending on detention, transportation and deportation of undocumented immigrants to expand detention capacity to more than 48,000 beds a day. Finally, in February of 2017, Attorney General Jeff Sessions revoked the Obama-era initiative to phase out the use of private contractors to run federal prisons, delivering the industry its biggest victory yet.

Private prison corporations have publicly expressed enthusiasm for the current administration’s aggressive stance on crime and immigration. In a 2017 third-quarter earnings call, a GEO official noted that the government’s need for additional detention space should benefit company revenues.

Here is how the private prison industry fared during Trump’s first year. Today, 65 percent of detainees held by the Department of Homeland Security are housed in privately run facilities. With the administration’s plans to increase the capacity to hold undocumented immigrants behind bars, the private prison industry’s revenues will surely follow suit. And in an unprecedented move, in late 2017, Immigration and Customs Enforcement (ICE) asked for information from contractors who can provide additional immigration detention space in the interior of the nation, in major cities such as Salt Lake City, Chicago, Detroit and St. Paul, along with an expected request for information on contractors who can provide additional capacity along the southern U.S. border in Texas.

CoreCivic’s CEO Damon Hininger publicly touted the administration’s move as a source of potential revenue to his company, noting in an August’s earnings call with investors, “ICE expects the average length of stay for detainees to increase as a result of increased interior enforcement. While immigrants arrested at the border typically are detained for 27 days, those arrested in the interior of the country are detained for roughly 52 days.” More days behind bars in their detention centers translates into more profits for the company.

The current administration and the private prison industry are also doing more than just merely talking. In April, ICE awarded GEO Group with a $110 million contract to build a new immigration detention center in Conroe, Texas, 40 miles north of Houston. At the time, the Associated Press reported that this contract award took many by surprise because GEO had “a surplus of 3,000 beds across its nationwide network of prisons.” And in December, CoreCivic filed plans with government officials in Elkhart County, Indiana, to construct an approximately $100 million detention facility. The move sparked candlelight vigils from area residents distraught by the development. CoreCivic has not yet received final approval from the Elkhart County Commissioners or ICE.

In April, the administration -- sticking to the message from Attorney General Sessions’ one-paragraph memo to the BOP reversing the Obama administration’s intent to reduce reliance on private prisons -- posted a notice requesting proposals from private prison companies to house prisoners in Criminal Alien Requirement (CAR) facilities. CAR prisons are privately managed prisons. There are 11 CAR prisons across the country run by three companies: GEO Group, CoreCivic and Management & Training Corp. The solicitation signaled a planned increase of 1,607 beds over BOP’s then-current population of privately imprisoned people -- 21,287 in total, as of May 2017. And on May 26, GEO Group announced that it had been awarded renewed contracts with the BOP for CAR facilities at the company’s prison complex in Big Spring, Texas. The 10-year agreement for 3,532 beds is worth up to $664 million.

My new book, "Inside Private Prisons: An American Dilemma in the Age of Mass Incarceration," notes that given today’s political realities, the private prison industry is not disappearing any time soon. Given the current administration’s penchant for privatizing government services -- including increasing its reliance on private prisons -- we owe the thousands of people who cycle into and out of private prisons and immigration detention centers a duty to constantly monitor their conditions and ensure that private entities that perform public functions should be subject to the same transparency, accountability and oversight as public entities. And for those worried about the private prison industry’s lack of transparency and accountability (in just one example, private prisons at the federal level are not subject to Freedom of Information Act Requests), if the first year of the Trump administration reflects the next three years, we need to act quickly to ensure that the ever-growing number of people behind bars in private prisons and immigration detention centers are the beneficiaries of improved conditions of confinement and better transparency. How? We need to ensure that state and federal laws are changed to require these corporations to comply with open records requests. And state and federal governments need to rewrite contracts with the private prison industry to require better programming, transparency, accountability and conditions of confinement.

While most of the coverage on private prisons has focused on the federal contracts, the administration’s rhetoric on reviving the war on drugs is starting to have a domino effect at the state level. Most recently, in Kentucky, the state signed a contract with CoreCivic to reopen a shuttered prison -- the Lee Adjustment Center in Beattyville --  and move about 800 inmates there. The opioid crisis in Kentucky pushed state policymakers to draft more draconian drug penalties that played a role in increasing its prison population to a record high of more than 24,000 inmates. With full prisons and jails, Kentucky felt it had no choice but to contract with CoreCivic to house almost 1,000 men it doesn’t have room to keep behind bars.

With less than a full 365 days of Trump in office, the private prison industry has managed to emerge from the near wreckage of the summer of 2016 facing a lucrative future. It’s imperative that we push the envelope as far as we can to ensure that these prisons and immigration detention centers are held more accountable than they currently are.

Lauren-Brooke Eisen is Senior Counsel in the Brennan Center's Justice Program at the Brennan Center for Justice at NYU School of Law and author of Inside Private Prisons: An American Dilemma in the Age of Mass Incarceration.