"Black Lightning": A necessary jolt to the superhero genre

A comic book series with spark and purpose, The CW's latest metahuman embraces its identity with thrilling energy 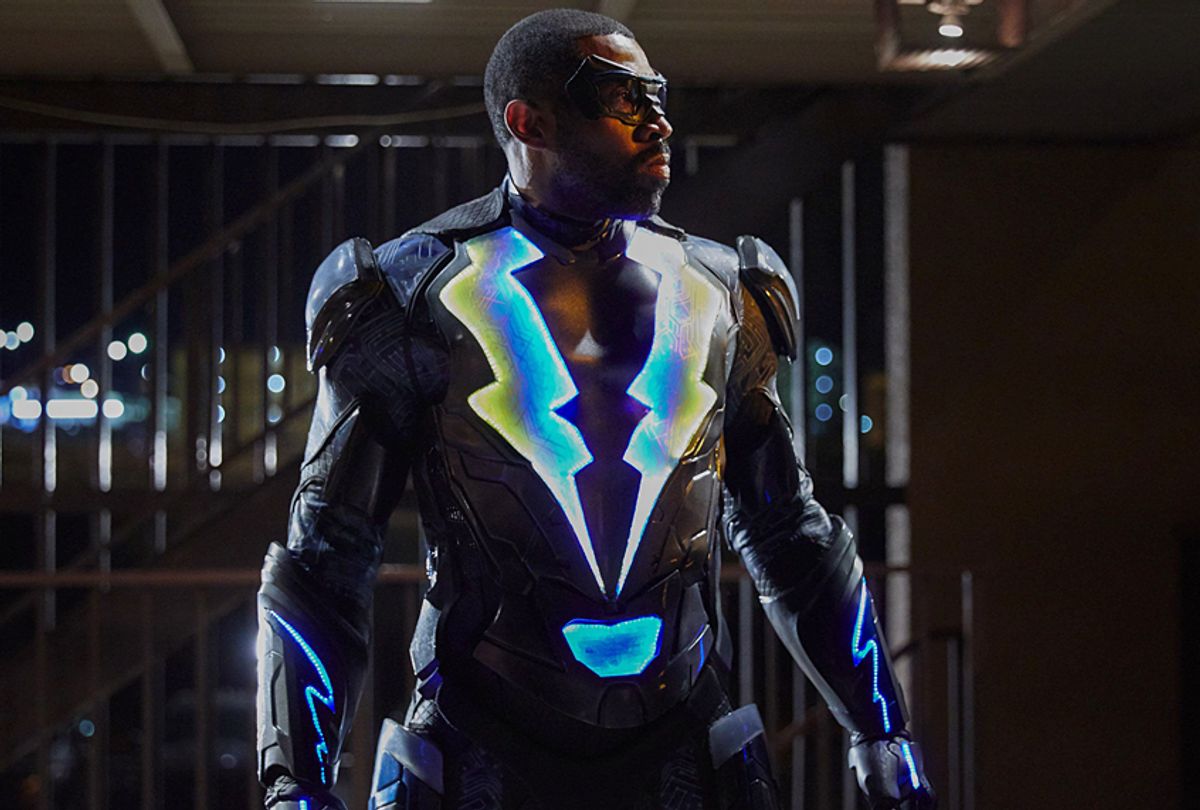 “Black Lightning” may be a series about a superpowered crusader, but the fight choreography and displays of his powers aren’t the reasons the watch. All of that works well enough, mind you, while leaving room for improvement.

But the show’s spark-filled haymakers and sidekicks don’t truly establish what’s best about this new entry to the CW’s line-up of DC titles, airing Tuesdays at 9 p.m.  That purpose is established in a scene where Jefferson Pierce’s power to harness high voltage does nothing for him, when the suit he’s wearing is the one he sports at his job as a school principal, and the car he’s riding in is a Volvo.

Pierce, played by Cress Williams, is driving his daughters home when the police pull them over and force him out of his car because he fits the description of a robber — which is to say, he’s a black man. Humiliated by the cops, Jefferson swallows his anger to make sure everyone gets home alive.

However, Jefferson’s strain to sublimate his frustration causes a power surge. Sparks illuminate his downcast irises, crackle within his clenched fists, and the streetlights in the area momentarily flicker and fade. In this moment, he’s the one exercising restraint.

“Black Lightning” represents part of television’s renaissance on the fronts of representation and inclusion. It also arrives weeks before the theatrical release of Marvel’s “Black Panther,” a movie that’s already broken presale records to become Fandango’s fastest-selling MCU title in the first 24 hours of availability.

The early popularity of “Black Panther” does not necessarily mean “Black Lightning” will be a hit, although that data that speaks to the appeal and the financial viability of titles that tell stories driven by people of color.

DC’s first black superhero was created in 1977 partly in response to Marvel’s “Luke Cage: Hero for Hire,” and developed by “Luke Cage” writer Tony Isabella. The modern TV serialization of “Marvel’s Luke Cage” debuted in 2016 after a string of reports about African Americans being killed by police, and to a certain degree its bulletproof champion of the people provided a measure of catharsis.

Larger than any of those themes is the series’ emphasis on pride. It’s a low hum pulsing through these opening episodes — unmistakably present but not overwhelming. Some bits are obvious; Jefferson, the administrator of a local school in his home community of Freeland, makes a point of teaching lessons to his students and children by calling upon wisdom from history’s bravest black men and women.

An exchange in the pilot quotes Martin Luther King, Jr. and is met by his daughter citing Fannie Lou Hamer. Behind all of this pulses soundtrack whose soul and R&B selections speak as distinctly as the dialogue without overpowering the narrative. Every statement in the first two episodes is an intentional shout-out to the culture.

By constructing the series in this way, Akil ensures the action fits the story, using Black Lightning’s battles as a final resort when diplomatic options are exhausted. Unlike the main characters of “Arrow” or “The Flash,” Jefferson is a reluctant hero, and a middle-aged one at that. He’s been out of the game for nine years, choosing to fight his battles in the classroom instead of the streets.  His retirement came at the behest of his now-ex-wife Lynn (Christine Adams), who refused to watch him put his life on the line at the cost of his family.

But it also enabled him to actively mold his daughters Anissa (Nafessa Williams) and Jennifer (China Anne McClain) into smart, outspoken young women. Freeland, however, has not fared so well in the absence of a protector, despite the often-overzealous efforts of the local police force.

A marked difference in “Black Lightning” is its focus on the villainy flourishing within the streets as opposed to primarily pitting Jefferson against the injustices imposed by systemic forces. This is in line with other DC series on the CW, only here, the main enemy of Freeland is a local gang The One Hundred supported by organized crime boss Tobias Whale (Marvin Jones III).

Jones’ Whale is a counterpoint to Williams’ Black Lightning, a character with albinism whose sense of superiority and addiction to terrorizing Freeland is based in no small part in a sense of hatred for his own people. Juxtaposing Whale’s sinister paradigm with the Pierce family’s vision of unity and determination infuses the opening arc with a weight beyond the simplistic clash between hero and villain.

Ultimately, though, “Black Lightning” fulfills its most important role of providing fun escapism that stands out in a genre flirting with the upper limit of saturation. Part of the credit for that is due to Williams’ charisma and the winning dynamic displayed between his character and Adams’ Lynn, in addition to the strong familial chemistry they have with Williams and McClain as their daughters. The Pierces have to hold the center of this series, and this is especially necessary given the hereditary nature of the family gift.

Jefferson’s physical limitations add a touch of humor and realism to the story as well. A night of shocking criminals and taking punches and gunshots isn’t so easily recovered from the day after, and when Jefferson reaches for a bottle of over-the-counter painkillers in the medicine cabinet after a confrontation, I’m betting many viewers will be able to relate.

As previously mentioned, “Black Lightning” is not without its inconsistencies. The origin story of another metahuman woven through the first two episodes feels like a clunky afterthought, and auxiliary characters such Black Lightning’s mentor and technological assistant Peter Gambi (James Remar) and police inspector Henderson (Damon Gupton) are introduced with little context. But these flaws aren’t insurmountable, and smoothing them out will mostly be a matter of story development.

Considering that not long ago “Black Lightning” had a place in comic book history as something of a clumsy nod at 1970s black empowerment, its modern reappraisal feels like a vindication as much as a worthwhile hour of pulse-quickening entertainment.

Futhermore, Akil transforms the comic book designation of blackness from a descriptor that separates and silos African American characters into a mark of distinctive extraordinariness. Blackness is the heart and soul of Freeland, of Black Lightning, and of the show itself, and the excitement it generates feels, well, electric.