Ryan Zinke wants to "restructure" the Interior Department. That may be cover for a widespread purge of "enemies" 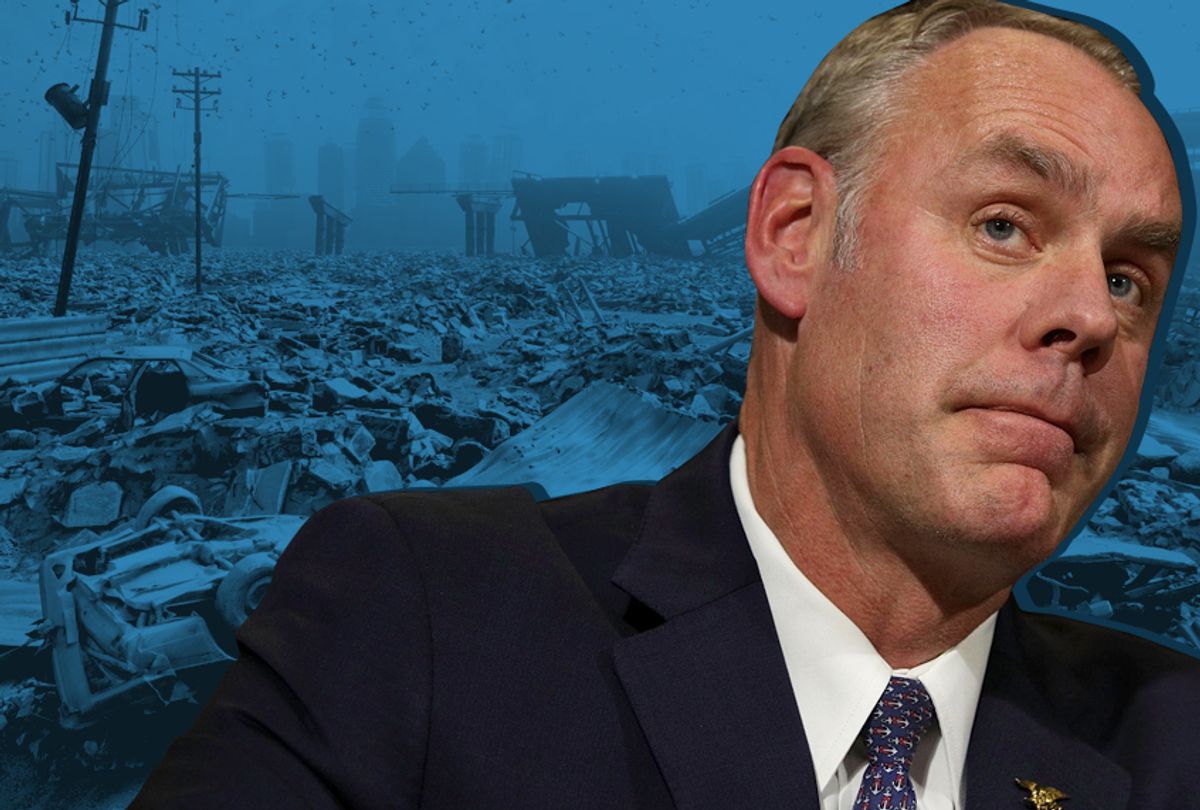 Steve Bannon may be out of Donald Trump's circle of trust, for now. But one of Bannon's crucial contributions to the Trump propaganda machine — the equation of career bureaucrats with a "deep state", i.e., an illegitimate shadow government — continues to thrive within the Trump administration.

The idea of a "deep state" originated in more left-leaning circles, to describe the admittedly worrisome way that entrenched government agencies like the CIA can continue their operations regardless of who occupies the White House. Bannon's stroke of genius was to use the term to demonize the majority of federal employees who are not political appointees, but have been hired to manage the daily operations of the government.

"As Trump takes a wrecking ball to the federal bureaucracy — what Steve Bannon has called 'the administrative state' — an illusory enemy like the Deep State is exactly what is needed to justify the destruction," Daniel Benjamin and Steven Simon wrote in Politico in March. "Repetitive allusions to sinister officials and administrators will expand and energize the constituency for a radical downsizing and weakening of government agencies, especially among Republicans, who appear to believe Trump’s utterances no matter how much the media debunk them."

Months after they wrote that, the prediction is playing out. Trump and his associates yammer constantly about the "deep state," a category that's expanded so far it now seems to encompass people who don't even work for the government. There's a target on the back of any non-political career bureaucrat who is seen as an obstacle to Trump administration goals to sell off the government to special interests. The way this attitude is affecting the State Department has been widely reported, as experts in diplomacy are rapidly being pushed out. Now the attitude seems to be affecting an agency that is about as far from the leftist definition of "deep state" as possible: The Department of the Interior.

Last week, Interior Secretary Ryan Zinke announced vague plans to dramatically reshape his department, moving central offices for agencies such as the Bureau of Land Management and Fish and Wildlife Services out of Washington to western cities, and reorganizing regional offices based on watersheds instead of state boundaries.

Zinke's rationale for this change — he claims it would increase both autonomy and efficiency, and has described it in the past as pushing "your generals where the fight is" — sounds good on the surface. Many experts on the issue of public lands management are skeptical, including Obama-era Interior Secretary Sally Jewell, who told the Washington Post that the move would create a "substantial disruption to productivity."

“The person that is leading this conversation is the same man who is proposing drastic cuts" to the Interior budget, Kate Kelly, director of public lands at the Center for American Progress, told Salon. Zinke, she said, is also "undermining career employees" and "trying to weaken his agency’s ability to conduct independent oversight. So any proposal for reorganization has to be seen through that lens.”

Zinke has already proposed cutting 4,000 employees from an Interior staff of only 70,000, and many fear this restructuring is an excuse to phase out critical jobs at the agency. Moreover, Zinke's first year in office has been marked by an over-the-top hostility towards his employees. In September, Zinke told a meeting of oil executives, "I got 30 percent of the crew that’s not loyal to the flag."

To make that comment even more troubling, it seems that Zinke was conflating loyalty to "the flag" with subservience to the Trump administration's pro-industry agenda. Zinke has also aggressively reassigned Interior employees who have been critical of his management, which has already led to the Inspector General opening an investigation into Zinke's actions.

Phil Francis, a former superintendent for the National Park Service and the current chair of the Coalition to Protect America's National Parks, said that park service staff show a "tremendous commitment to our mission" and "have the institutional knowledge and skill sets" necessary to do the job of protecting national park lands. He worries that Zinke's proposed restructuring, which would affect the park service along with other Interior agencies, "weakens the oversight of the national parks."

Francis also worried about the apparent "lack of transparency" to this process, noting that "most of the planning has been done in secret, without National Park Service staff input."

This concern was echoed by Denis Galvin, former deputy director of the National Park Service, who told Congress in December that the "leadership of the bureaus has been left primarily in the dark and there has been no opportunity for public input or comment."

Most Interior employees already work close to the lands that they manage, so Zinke's plan to move employees out of Washington would largely target the small numbers of Interior staffers whose work involves representing the department's interests in the capital.

"There are many needs and requests that come from the Congress on a daily basis," Francis explained. "We need to have the professional staff available there to represent our interest to the Congress."

"Conversations about budget, about priorities, they are still going to happen in the halls of Congress and in Washington, D.C., so you’re effectively removing these agencies from the so-called room where it happens," Kelly added. "The long-term impact will be to weaken the bureaus if they don’t have a seat at the table on a regular basis.”

One person who apparently agreed with this point of view in the past is Zinke himself. As Montana's sole representative in Congress, he helped stop an effort to shut down state offices for the Bureau of Land Management, a move many feared was intended to defang the power of the department to protect Western lands.

Of course, weakening the power and the voice of career Interior employees may very well be the point. Many people work at jobs focused on protecting the environment, maintaining healthy ecosystems for plants and animals or preserving the nation's breathtaking vistas for recreational purposes. Those jobs would seem to conflict with Zinke's apparent focus on giving away our natural resources at cut-rate prices to drilling and mining interests who want to make a handsome profit, and don't care how much long-term damage that does.