Dylan Farrow on Woody Allen: "Why shouldn't I want to bring him down?"

Will Farrow's first on-camera interview mark a turning point in this 25-year-long story? 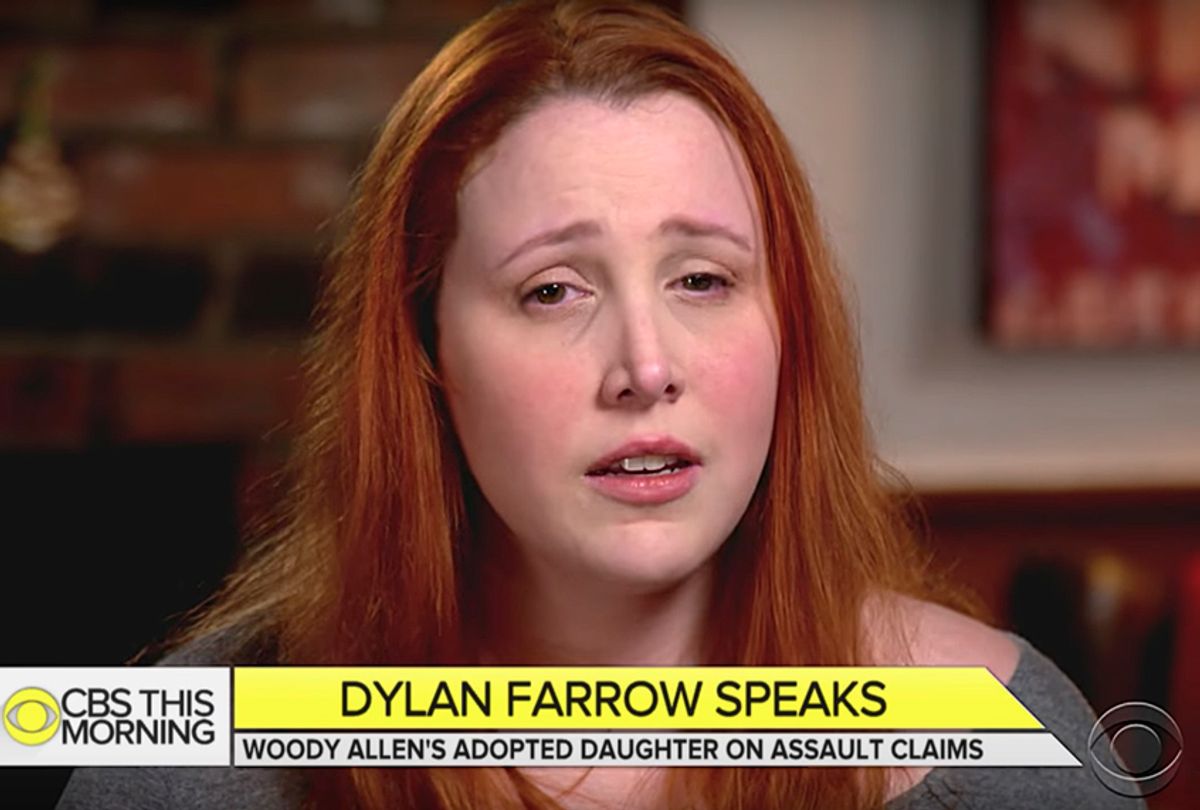 Dylan Farrow's first television interview will air on "CBS This Morning" Thursday, January 18. It's promised that she will discuss the alleged sexual abuse she suffered at the hands of director Woody Allen, her adoptive father, when she was seven.

King went on to ask Farrow why she is speaking out against the director now. Farrow notes that she has maintained her story for 25 years at this point, even if criminal charges were never filed in connection to it. Allen has denied the allegations for just as long.

As to why people should believe her, Farrow said "I suppose that's on them." She added, "But all I can do is speak my truth, and hope . . . that somebody will believe me instead of just hearing it."

Indeed, it may be just the moment when people at large will begin to believe Farrow. There has been a shift in the public consciousness and national conversation since the floodgates of #MeToo opened after Hollywood mogul Harvey Weinstein's alleged pattern of sexual abuse came to light.

Following that, and an editorial by Farrow published in the Los Angeles Times, a number of actors have come forward to express their regret over working with Woody Allen -- Griffin Newman, Rebecca Hall, Timothée Chalamet, Ellen Page and David Krumholtz included. Some have gone so far as to donate their salaries from their Allen films to organizations that address sexual abuse, including the Rape, Abuse & Incest National Network (RAINN) and Time's Up. Greta Gerwig who worked on Allen's "To Rome with Love," told The New York Times recently that "if I had known then what I know now, I would not have acted in the film."

Most notable, perhaps, was Mira Sorvino, who won an Oscar for her role in Allen's "Mighty Aphrodite" and apologized to Farrow directly in an open letter published on HuffPost.

As Allen's support in the industry appears to be diminishing, the support for Farrow swells. If CBS's preview is reflective of what's to come, that trend may hit something of a turning point come Thursday. It's easy to think that with Farrow's agony-crossed face on video, Allen's career may at last face real consequences.

Not everyone in Hollywood has backed Dylan Farrow in light of what appears to be a new reckoning for the director, however. On Twitter Tuesday, Alec Baldwin called the repudiation of Allen "unfair" and "sad" and said working with Allen was "one of the privileges of my career."

See the preview below: