It starts when they are boys 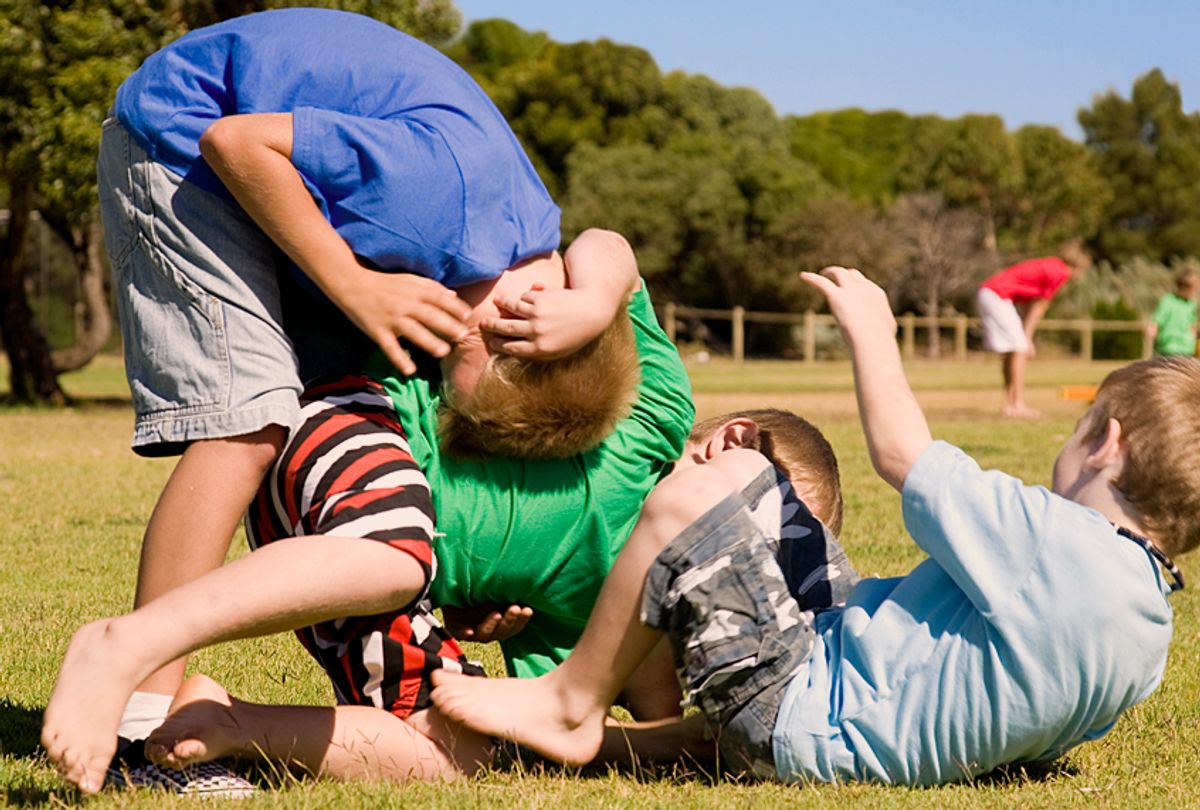 I guess I’m one of the lucky ones, not that I spent my luck as wisely as I could have. I learned a lesson from my father decades ago, when I was about 14 or 15. I was doubtlessly a typical male teenager, with all of the hormonal imbalances and prefrontal deficiencies that are understood today, even if they weren’t then. I had apparently gotten into it with my mother when she accused me of some fault or minor offense, and I “talked back” to her, as the saying went back then. I don’t remember what the dispute was, or what I said — it was probably something along the lines of “who cares what you think,” or “mind your own business” — certainly nothing stronger or more offensive than that. She apparently reported the exchange to my father, and the next thing I knew, he was home from work, still in his uniform, and I was sitting across from him in the living room. I can remember it like it was yesterday. He had huge eyes, and they were on fire. His voice was often described as “booming,” and he definitely boomed. He asked me if I had said what was reported by my mother. I admitted I had.

I had been in trouble with my father before, lots of times. I’ve written previously in these pages about our relationship, which could be described charitably as strained. But I had never before seen him so mad. I thought he was going to punish me — being restricted to my room would be in line with penalties meted out for other offenses, large and small. But he just sat there, staring at me with his big, angry eyes. And then I saw them soften, as if a switch had been thrown within him, and he said, softly this time: “Do you understand what I’m saying to you, son? Have you ever heard me talk to your mother like that?” I admitted that I hadn’t. “We don’t talk to women like that in this house.” We sat like that for a moment without talking, and the next thing I knew, he reached out and squeezed my hand and stood up and walked away. He’d made his point. He never did restrict me to my room.

That was my introduction to how men should treat women in the Truscott house. The problem was that there was one set of rules within the family, and another set of rules outside. The truth was, I was already all too familiar with them. What my father had been talking about was all around me. Talking disrespectfully about girls, if not actually to them, was acceptable behavior. It began happening when we were away from our homes, when we were apart from our mothers and sisters and the girls we went to school with. I was a boy, so I was always in groups of other boys — on sports teams, during gym class (segregated by gender), during Boy Scouts meetings or camp-outs, and then, as we got older, driving around together, hanging out working on somebody’s car, sitting around in a car at the drive-in at Smaks, waiting for something to happen. The put-downs and the trash talk would fly. So-and-so had big feet and fat ankles. The girl in trigonometry who always raised her hand didn’t even wear a bra yet. The one with stringy hair always standing by herself in the halls at school put out for anybody. Oh, I joined in, all right. Everyone did. If you weren’t the one making wisecracks and putting them down, you were laughing along with the others.

At that age, as adolescents, it was always about girls, never to them. We were too awkward and inept and intimidated to talk to girls about the weather, much less about the subject that was the subtext to everything we said to each other about them: sex. We made comments about tits and ass without ever having come into contact with either. Because that’s what you did. They had ‘em, so you commented on ‘em. It was all you could do, really, because the real deal was out there on the other side of some barrier we hadn’t figured out how to cross.

That would come later, along with actually talking to girls, not just about them. But the behavior of boys — who were now young men in college, or working at jobs — didn’t change. Sitting around with a bunch of guys in somebody’s basement was swapped for a dorm room. Boy Scout camp was swapped for road trips. The trash talk stayed the same. So did how and where it happened: in groups, away from home.

I had a friend who went to Princeton as a transfer student after two years at another college. When he got there, he realized he had missed out on all of the bonding that had taken place during one’s first two years at Princeton. The place was all-male then, of course, and they had their own language and rituals and rites of passage involving girls and sex, and he quickly realized he was going to have to navigate his way through this foreign sea without any charts. He called me on the phone, and we met a couple of times on weekends, and he would describe to me certain rituals at the eating club to which he had been admitted, and we’d try to come up with ways that he could finesse his way through them. There was one involving group sex in a pitch black room that involved swapping girls and what would happen when the lights came up. I can’t remember what the point of it was, or if it even had a point, but it was distasteful to my friend, and what he wanted to do was figure out a way to get through it without revealing his general revulsion to his buddies. He wasn’t worried about the girls, and what they thought. He was worried about his pals at Princeton, and what they thought.

That’s the way it was. Boys in groups learning to talk badly about girls became men in groups talking badly to women which led to men behaving badly with women. I remember at some point realizing that you could talk nasty about women in front of other women the same way you talked about women with the guys, and they wouldn’t object. You’d be standing in a bar in a mixed group of young men and women, and an attractive woman would walk in, and someone would say “check out the rack on that one” right in front of the women. I remember years ago sitting on the beach out here in the Hamptons with a group of friends, men and women both, and one of my friends and I would comment on how much money a nerdy guy was spending on his gorgeous girlfriend when they would pass our group, the guy loaded down with beach chairs and a cooler and beach towels and a bag from Loaves and Fishes, the girl floating along in a skimpy bikini and a straw hat and a smile. The women laughed along with us.

And you could get away with making sexual wisecracks and comments in offices. Nice skirt. They didn’t have a shorter one? Where’d you get those fuck-me heels? The Pleasure Palace? A woman’s purse gets knocked off her desk, and a couple of condoms fall out. Planning on getting lucky tonight?

I was never witness to any sexual abuse of women, but some of what I recall happening, and some of what I did myself certainly amounted to sexual harassment, a phrase that wouldn’t even enter the lexicon until the mid-1970’s. We didn’t need a word to describe something we knew was wrong anyway, and yet we just rested on our male privilege and did it. Other behavior was boorish and puerile, not to say just plain disgusting and inhumane. The objects in every single case were women. The perpetrators were men. I ask myself today, what did those women do to deserve that kind of treatment? Saying they did “nothing” doesn’t do them justice. Not only were they our friends and co-workers, lovers and girlfriends, back in those days, they went out of their way to help us figure out new ways to act. It was all right out there in front of us: feminism wasn’t just a political movement bent on changing some amorphous “establishment” in order to achieve control over their bodies and equal pay and equal rights. It was a guidebook for men that women were writing every single day, not only in print, but in our everyday lives.

You think it’s okay to treat the office like a frat house and talk nasty to women at work? Not any longer. You think you don’t have to keep your hands to yourself with someone you just met? That’s her body, not yours. You think when she says “no” she’s really saying “yes” because of the way she came onto you, or the way she’s dressed? No means no. You think the woman you’re married to is going to work all day and cook supper and do the dishes and change the diapers and clean the house and be ready for whatever you’ve got in mind when you get in bed? Think again, pal. Do your fair share.

What my father said to me so many years ago was old fashioned in the best sort of way. He was king, and that set of quarters at Fort Leavenworth was his castle. We don’t talk like that in my house, he told me. Sure, his rules put women on a pedestal. He was talking about my mother and my sister, after all.

You could make a case that such a system is the essence of patriarchy. But men protecting the nest and letting the world go to hell on the other side of the front door isn’t enough. The world outside the home for boys and young men is still, even today, set up to put them in groups and allow, if not encourage them to set their own rules of behavior. Things haven’t changed much in a half century. The papers are full of #metoo revelations of powerful men sexually harassing women, abusing them, behaving badly, even criminally. College fraternities are reported to be places of unfettered sexual harassment and abuse. Sexual abuse and rape infects the military. Athletes on professional sports teams are allowed to get away with abusing women in bars and battering their wives. This kind of stuff doesn’t come from nowhere. It was learned when men were boys. That’s where it starts, and if it’s going to end, that’s where we’ll have to begin changing things.