"When They Call You a Terrorist": Black Lives Matter memoir is rooted in radical love 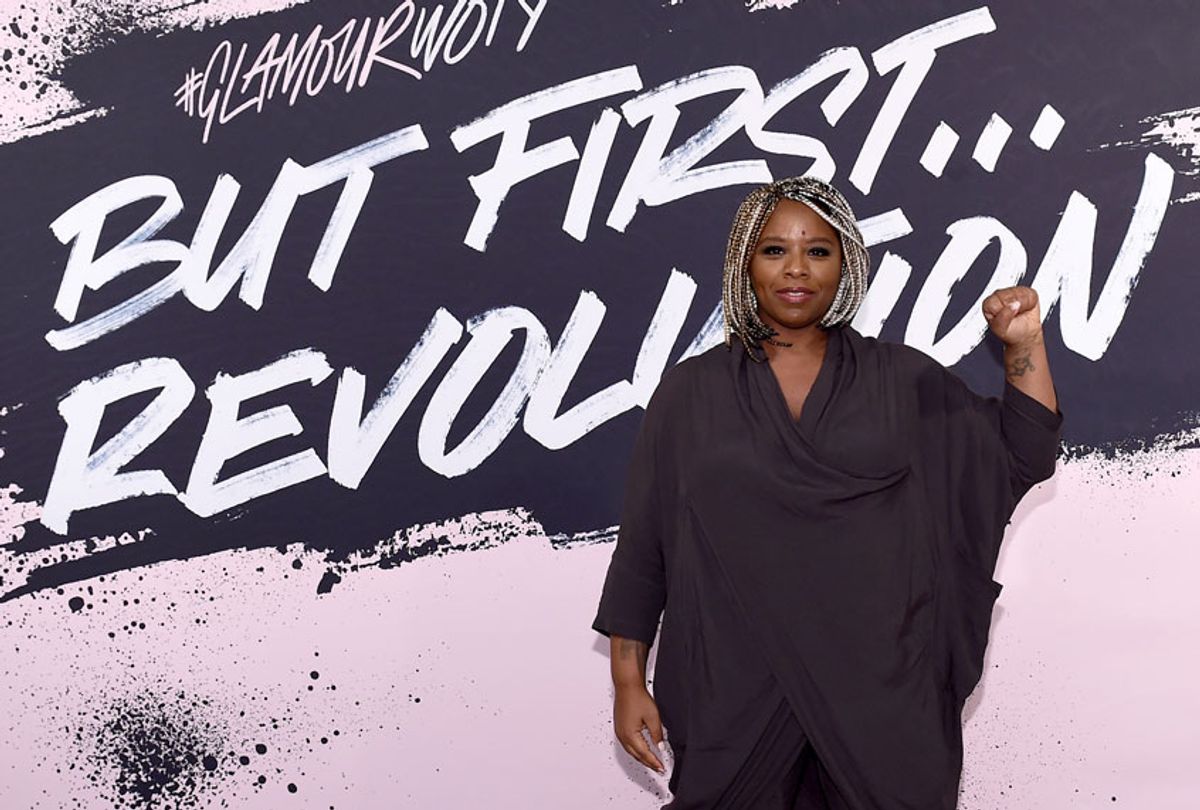 Back in August, shortly before the world watched in horror as torch-wielding white supremacists marched onto the University of Virginia’s campus at night chanting “Jews will not replace us!” and the devastation of the following day, when Heather Heyer was killed by a man who, having just marched alongside a white nationalist group, drove his car straight into a crowd of anti-racist counter-protestors, the FBI’s counterterrorism division was compiling an internal report obtained by Foreign Policy calling “Black Identity Extremists,” whatever those are, a domestic terrorist threat. “This is a new umbrella designation that has no basis,” a former Department of Homeland Security official told Foreign Policy.

But even before Foreign Policy released the FBI’s report in October, far-right voices had been sowing the seeds of that ideology in the public imagination. Former KKK leader David Duke praised President Donald Trump’s comments on white supremacist violence in Charlottesville — he said there had been “some very fine people on both sides” — as condemning “the leftist terrorists” in Black Lives Matter. Trump surrogate and former Milwaukee County Sheriff David Clarke called multiple times in 2016 for Black Lives Matter to be designated as a hate group with a “radical ideology of terrorism.” This deliberate “on both sides” conflation of the antiracist activism of Black Lives Matter with the organized racial bigotry of neo-Nazis even led the Atlantic to publish an explainer, “How to Distinguish Between Antifa, White Supremacists, and Black Lives Matter,” as if that should be a difficult enterprise.

But clearly the confusion is politically useful to those who control and who benefit from the institutions that uphold white supremacy. The more influence and power community organizers and activists amass in their pursuit of justice, the more change they can create; discrediting the work of demanding life and dignity for black people in America as racially-motivated hate is outrageous, but thanks to echo chambers and dwindling media literacy, it’s disturbingly effective.

And so the title of Patrisse Khan-Cullors’ triumphant life story, “When They Call You a Terrorist: A Black Lives Matter Memoir” (St. Martin’s Press) is a deliberate, courageous and necessary rebuttal of the propaganda that would undermine the Black Lives Matter movement by painting it, absurdly, as “hate.” Written with journalist and author asha bandele, Khan-Cullors charts her development as an activist and community organizer from childhood to now, as one of the three creators of #BlackLivesMatter and the movement that grew out of their hashtag protesting the acquittal of George Zimmerman for the killing of Trayvon Martin.

What’s remarkable about her story is that for all of her earned anger against the systems and institutions that perpetuate racial inequality — too often to fatal ends —Khan-Cullors’ narrative is brimming with love. The book overflows with it, in both word and action, for her community, for her family, for people with disabilities and addictions and those who are incarcerated, for queer and transgender youth and adults, for the families and communities devastated by the school-to-prison pipeline and police brutality, and for struggling workers like her mother, “who worked from can’t see in the morning until can’t see at night.”

Khan-Cullors and bandele paint a vivid portrait of growing up in 1990s Van Nuys, a poor black and Latino neighborhood of Los Angeles where America’s profound inequality is in young Patrisse’s face every day, starting with the apartment her mother, who works 16-hour days, rents, where for the better part of a year the landlord refuses to fix their broken refrigerator:

The only place in my hood to buy groceries is a 7-Eleven. Without it, George’s liquor store, the small Mexican and Chinese fast-food spots, and the Taco Bell, we would have nowhere in our neighborhood to get something to eat or drink.

But less than a mile away is Sherman Oaks, a wealthy white neighborhood with big old houses that have two-car garages, landscaped lawns and swimming pools that look nothing like the untended, postage-stamp-sized one behind our apartment building. In Sherman Oaks, there is nothing that does not appear beautiful and well kept.

Against that backdrop, her two adolescent brothers are rousted by cops just for standing around with their friends on the sidewalk; she experiences the drastic difference in educational resources when she goes from her neighborhood school to a gifted program in a middle school in Sherman Oaks, where she also meets wealthy white kids who deal weed and yet never fear being arrested, while her own home had been invaded by police in riot gear in search of her uncle who did sell drugs but who didn’t even live there.

“[I]n white schools, I witnessed an extraordinary amount of drug use compared to what my friends in my neighborhood schools experienced,” they write. “And yet my friends were the ones policed. My neighborhood friends went to schools where no mass or even singular shootings occurred, but where police in full Kevlar patrolled the hallways, often with drug-sniffing dogs, the very same kind that they turned on children in the South who demanded an end to segregation.”

This stark, early awareness that the game is rigged in the favor of those who already start with abundant resources could easily make a person grow up cynical, detached, apathetic. The scene in which young Patrisse dines at the home of a well-off classmate and learns her friend's kindly father is the same slumlord who ignored her family’s broken fridge lands like a punch to the gut. But that’s not what happens. She attends a charter high school focused on social justice, where she learns the academic foundations for the principles she will later put into practice. By age 17 when she begins working with a community organizing group called the Strategy Center, she has been immersed in advocacy work at school and at home. Throughout her adolescence and young adulthood, she and her family must advocate for her brother and “first best friend” Monte, whose schizoaffective disorder makes him particularly vulnerable to brutalization at the hands of a system that criminalizes mental illness in African American men:

. . . while I know the basics of what he experienced the first time he was sent to LA County Jail in 1999, a jail run by the sheriff’s department, it will not be until 2011 when I read a report issued by the ACLU of Southern California that I fully understand what was done to my brother there. This is to say Abu Ghraib was first practiced on this soil, in this America.

Her tender relationship with Monte is one of the book’s central heartbeats, along with her bond with her father Gabriel, whose struggle with addiction and the justice system also puts a compelling face on the humiliating dangers of living without a safety net and mass incarceration. It’s one thing to read studies and policy papers; it’s another to follow her family’s attempts to find Monte a job and a place to live with his record and his history of trauma, and to witness sparkling Gabriel’s humbling process of relapse, recovery and re-entry. “In California, there are 4,800 barriers to re-entry,” they write. “You can have a two-year sentence but it doesn’t mean you’re not doing life.”

Throughout the book, Khan-Cullors and bandele personalize the radical love that fuels her work's theory and praxis. Out of that ACLU report she creates a touring performance art show that exposes the terror and torture enacted on inmates, and out of comes The Coalition to End Sheriff Violence, which is built into a formal group called Dignity and Power Now. In 2016, they create the first civilian oversight board of the LA County Sheriff’s Department. This, like the work she engaged in to end school truancy fines — a poverty tax used to punish families least able to pay it — is results-driven organizing that gives power back to the community the institutions are supposed to serve. In the hands of Khan-Cullors and bandele, it’s as thrilling to read as any David slaying a vicious Goliath.

All of this is to say that #BlackLivesMatter, and the movement that grew out of the hashtag Khan-Cullors began with fellow organizers Opal Tometi and Alicia Garza, was not an accident born of indiscriminate anger or prejudicial hatred or resentment toward white people or the police, and it took years of their work to bring the hashtag, let alone the concept, to a prominent place in American discourse. "We have built a decentralized movement that encourages and supports local leaders to name and claim the work that is needed in order to make their communities more just," Khan-Cullors and bandele write. "This is monumentally difficult in a world that has made even activism a celebrity pursuit." (That last point has been hammered home by the flurry of attention to the celebrity faces of #TimesUp.) Black women are deliberately amplified by the Black Lives Matter movement, and while that is still, sadly, a radical act in this country, their strides toward equality and justice can never be classified as extreme or un-American. This is simply and necessarily what clarity of purpose and rigorous methodology can accomplish when love, not hate, is the fuel.