A critical moment in Korea: Will the U.S. give peace a chance?

Amid a serious thaw between North and South Korea, the Trump administration prepares for war. Don't exhale yet 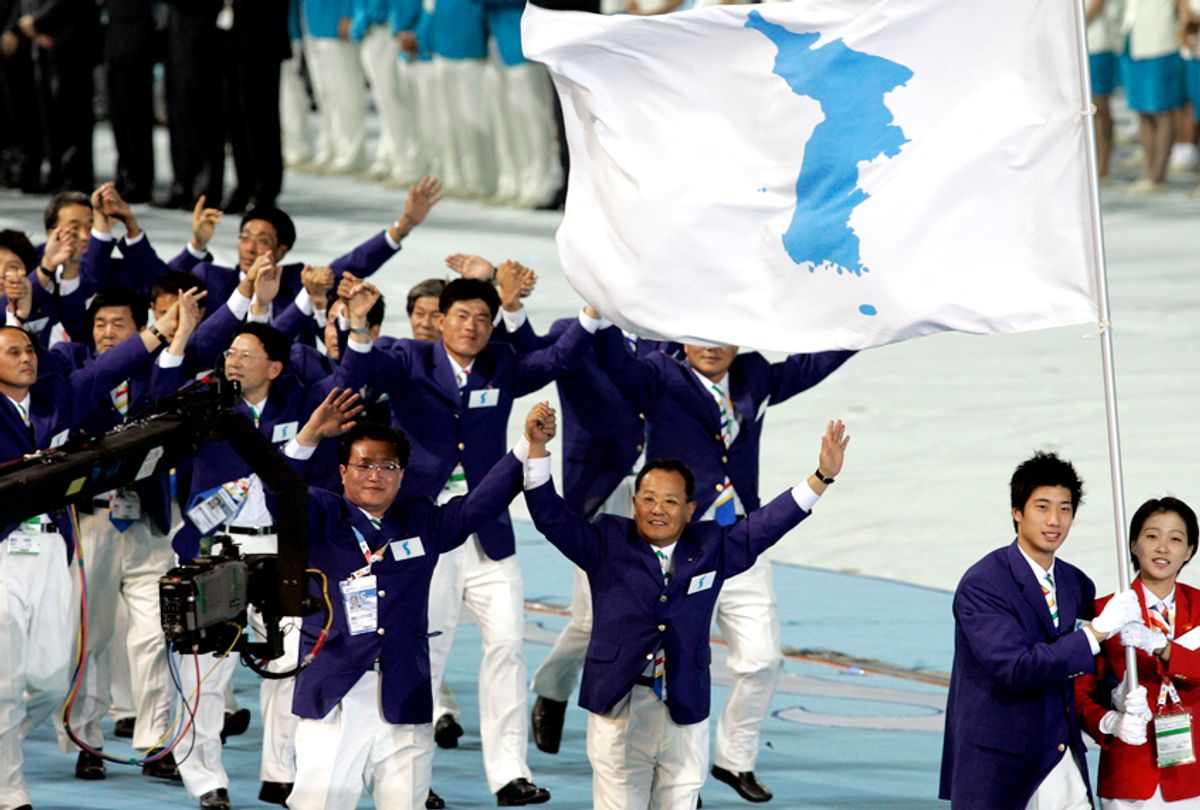 North and South Korea have suddenly entered a critical passage. In a week of Page 1–worthy events, it would be difficult to overstate the importance of what transpires over the next month or so. Watch closely: This interim in the long-running Korea crisis is as freighted with consequence as any since I began covering it three decades ago. Peace could break out, to Washington’s evident chagrin. There is also an unsettling chance that a yearlong exchange of essentially weightless epithets could turn into one involving missiles tipped with live payloads.

The promise of peace, the peril of a war that cannot be other than catastrophic; rarely if ever since North Korea and the UN Command signed the Armistice Agreement in 1953 have the prospects for both stood before us in so agonizing a parallel.

Since Kim Jong Un signaled his openness to South Korea’s overtures in his New Year’s speech, Pyongyang and Seoul have advanced toward purposefully modest goals at a pace even incurable optimists would not have dared predict. Last week came agreement that athletes from the two sides would march under a single flag at the Olympic Games set to open in Pyeongchang, South Korea, next month. They also committed to putting a women’s hockey team with players from both countries on the ice. This is further than North and South have ever before gone, at least on the sporting side.

It is now possible — no, it behooves us — to look through the dense curtain of Orientalist rhetoric Washington and our media generate — a madman, a young man of careening unpredictability — and consider who the North Korean leader might be. There are numerous indications he is a would-be modernizer in the mold of his late father, Kim Jong Il. This point now requires close scrutiny. A report issued Friday by Bretton Woods Research, a financial advisory firm, put it this way:

We believe Kim sees the dialogue as a bridge to a potential lifting of South Korean unilateral sanctions and the possibility of tapping South Korea’s deep pockets for investment. … Arguably, Swiss-educated Kim has done more to open the North Korean economy than any other leader since the nation’s founding.

One reads nothing of this in the American press and hears none of it from administration officials. But if this view is accurate, and in my read there is sufficient evidence to suggest it is, then South Korean President Moon Jae In is to be supported as he pursues a renewed détente with Pyongyang. His initiative indicates he sees a potential opening between North and South well worth exploiting. I go back to Kim’s New Year’s speech. One sentence to the next, he expressed satisfaction that North Korea has achieved an effective nuclear deterrent and went straight on to suggest a renewed dialogue with the South.

Actually, I go back further than New Year’s Day. Anyone who knows Koreans at all well cannot fail to detect the deep, strong current of common identity and a desire to reunify shared on both sides of the 38th Parallel. It is one reason I have long been inclined to view a negotiated peace as vastly more promising than armed conflict as the best path to peace. It is also one reason — and a very big one — that Moon now enjoys approval ratings among South Koreans above 75 percent.

I am a Lennonist at this moment, to put the point not too simply: This new attempt to advance toward a sustainable peace deserves a chance.

I wrote somewhat exuberantly when Seoul and Pyongyang began talking earlier this month. But I also saw cause for anxiety in Washington’s silence. I am pleased now I did not omit that latter point.

The very day negotiators from both sides convened for talks at Panmunjom, the village that straddles the 38th Parallel, the Wall Street Journal reported that administration officials are “quietly debating whether it’s possible to mount a limited military strike against North Korean sites without igniting an all-out war on the Korean Peninsula.” I always love these kind of reports: Will someone tell me what is quiet about this debate when it is leaked to a national daily and splashed just as intended on Page 1?

That is called “the bloody nose strategy.” Quickly following it was a report in the New York Times about a wide range of operational drills now in progress at various Army bases around the country — practice for airlifting strike forces into Korea “in a hurry.” The Pentagon already plans to send special operations personnel to Korea in time for the Olympics, “what some officials said ultimately could be the formation of a Korea-based task force similar to the types that are fighting in Iraq and Syria.”

Take my word for it, readers. These reports are not the work of hard-driving, deep-digging journalists. Those filing them from Washington to New York have simply opened wide, swallowed, and now tell us what the Pentagon wants us to brace for.

Last Thursday the Times published a story that was perhaps more revealing than the paper once-of-record intended. “Olympic détente upends strategy on North Korea,” the headline announced. The piece then reported on what I can describe only as high anxiety in Washington at the threat that peace may break out in Northeast Asia. That unified flag North and South will march under in Pyeongchang next month “is a symbolic manifestation of what worries Mr. Trump’s aides.” Peaceful reunification frightens the policy cliques? Come again, please? Do these reporters read their copy over before they file it? It is perfectly accurate, of course, but it is also among the great unsayables among journalists covering trans–Pacific affairs.

There has been resistance, if the term has not been despoiled, to the “bloody nose” line of thought. Last Thursday, 30 congressmen from both parties sent the White House a letter calling for the reinstatement of military-to-military communication between the U.S. and North Korea. “The U.S. should do all in its power to avoid misunderstandings that could lead to nuclear war,” the letter said in part. It is a sound argument for de-escalation.

Gareth Porter, a Washington writer with long experience covering the North–South crisis, published two pieces of interest last week. In one, which is here, Porter lays out a strong critique of “coercive diplomacy” — do it our way or we shoot — in which he establishes that is has not worked in 30 years, not least in the Korea case. Correct and well-observed. The other, which is here, argues that the “bloody nose” threat is mere bluff. “That’s because national security adviser H.R. McMaster and other senior officials know the Trump administration has no first-strike option that is not disastrous,” Porter writes.

I wish I could agree with Porter, who I know and admire, in this latter case. But I can say only, “I hope so.” While it is true that attacking the North is certain to produce a human calamity, it is important not to forget who makes policy in the Trump administration. By all appearances it is generated along the axis running between McMaster’s White House office and the Pentagon via Defense Secretary Jim Mattis. These are not diplomats. A pair of generals (the latter retired, the former still on active duty), they are operations men given to military solutions. It is not at all clear that those airlift drills at Fort Bragg and the skies above Nevada are altogether display in the service of another exercise in coercive diplomacy.

I had a report Friday sent via an intermediary from a very sound source in Beijing who is exposed to a variety of Chinese officials on a daily basis. To capture the full force of it, I can do no better than quote it without preamble:

The intelligence and military communities of the U.S., Japan, South Korea, and China have been in close consultation, and there is agreement that the “red line” that North Korea must not cross is the launching of an ICBM rocket that could reach the U.S. and potentially explode a nuclear bomb in the atmosphere … crippling our country for quite some time. The four countries named above have been laying plans that if the red line is crossed there will indeed be a “preventive war,” and that it will be a very swift invasion, with the Chinese moving in to secure weapons sites.

Note who is cited in this disturbing report. It is military and intelligence officers, not the leadership in any of the nations named. I do not read this, therefore, as cancelling the authenticity of Moon’s détente efforts; nor do I think the military runs Chinese policy; the Foreign Ministry does, plainly. The context in which this account jars is American: It casts the preparedness exercise mentioned above in a very unwelcome light.

I had hoped the opening between North and South Korea after New Year’s would leave us in a state of unfamiliar relief, after the reckless talk that escalated though all of last year. But there are not yet any grounds for exhaling. We witness a kind of race, in my read. In essence it is between Washington and Seoul, the Trump White House and Moon’s Blue House, as South Koreans call their presidential palace.

Two things are to be hoped for at this fraught moment. One, Moon must persist in identifying the terms of a sustainable agreement to ease tension that the North will be able to accept. Two, Pyongyang must understand where that red line lies and conduct no more tests that come even close to crossing it. This means it must be satisfied that its deterrent is satisfactory as it now is. Deterrence, as I have argued from the first, is the key to the process now.