Heady and harrowing, "The Alienist" enthralls

After a 24-year wait, Caleb Carr’s 1994 bestseller has made it to TV, and TNT's treatment does it justice 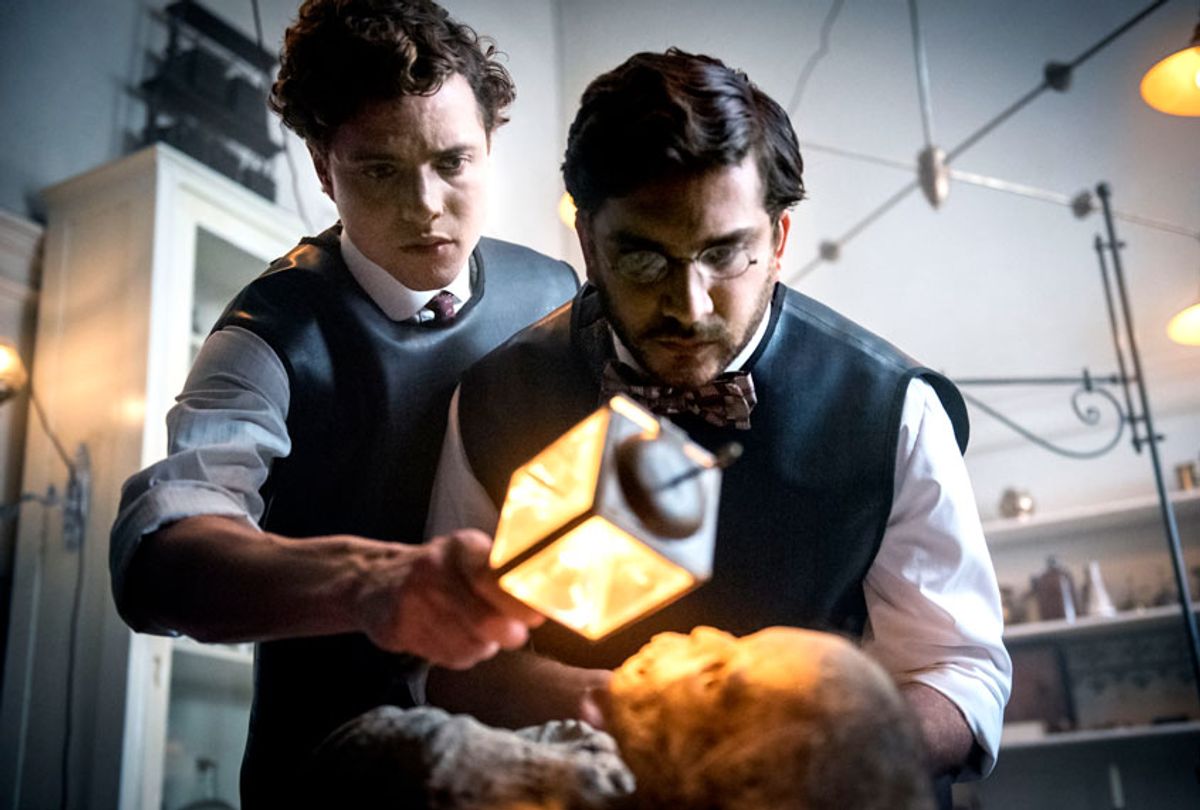 Matthew Shear and Douglas Smith in The Alienist (TNT/Kata Vermes)
--

Atmosphere works wonders. Some cinephiles would say it’s only thing that matters but, at the very least, it elevates the commonplace to seem more than it is.

To some, saying such a thing about “The Alienist,” TNT’s adaptation of Caleb Carr’s 1994 bestseller premiering Monday at 9 p.m., might as well be heresy. The book’s fans have waited a very long time to see Carr’s vivid tale make it to a screen, and citing its atmosphere before any of its other qualities could leave the impression that the 10-episode series needs to compensate for a lack of substance or originality.

There’s some truth in the second point, but only because the serial killer genre spread like a weed through film and television in the 24 years since the initial publication of Carr’s work. Substance, on the other hand, is something “The Alienist” amply possesses. The preponderance of credit for that is due to the performances of Daniel Brühl, Luke Evans and Dakota Fanning, and the style-conscious direction of Jakob Verbruggen.

But if “The Alienist” has a florid orchestration to it, this is because the set design, costumes and the very air throughout each episode share starring roles with its actors. A balance of beauty with lurid violence and brutish filth steers Carr’s novel, which is as much of an examination of history and place as it is a psychological thriller.

On the screen this translates in a visual palette detailed enough to seem heady, and it’s almost too much at times. But the plot is a spiraling investigation of bizarre, gory murders perpetrated by some shadowy monster targeting 19th-century boy prostitutes. Heavy doses of mystique, then, are a welcome counterbalance to the horror. And “The Alienist” makes committing to its ride all too easy.

Each of the central performances fits the story's jagged and weirdly gracious setting, coming together with mechanical smoothness. Screenwriter Hossein Amini deserves a tip of the hat for translating each chapter so easily for the screen, but the core cast enables his solid prose to hold real weight against the prominent scenery.

Brühl interprets Carr’s titular hero with a Sherlock Holmesian chill and yet avoids seeming derivative. This counts as a significant accomplishment in the wake of multiple versions of his ilk seen in any number of procedurals and is only possible because of the actor’s exactness in realizing the part.

Fanning, though, is the greater revelation here as Sara Howard, the stoic secretary to police commissioner Theodore Roosevelt (yes, that Teddy Roosevelt). Sara’s ambitions to be taken seriously as a detective are dismissed in a workplace that equates womanhood with weakness, but never in the series' opening episodes does Fanning allow Sara to drop her steel.

At the same time, her portrayal does not neutralize Sara's femininity or emanate a false imperviousness. Some of the tensest moments happen when Fanning sharply and audibly breathes with nervous fear even as Sara presses onward, intensely committed to moving toward and through danger.

Any weaknesses in the secondary cast demonstrated in the series’ first two episodes are shored up by the central players, but in truth, no performances are glaringly terrible enough to mention. Or if there are, the ambiance is distracting enough to prevent us from noticing too much. By the time you do, you’re likely to have swooned into the stream of it, and that may not give you everything you want -- but it’s the most that a mystery like this can expect of its watchers.