Waiting for Columbia: What happened when the space shuttle didn't land

As Kennedy Space Center's launch director, I was one of the officials who was supposed to welcome Columbia home 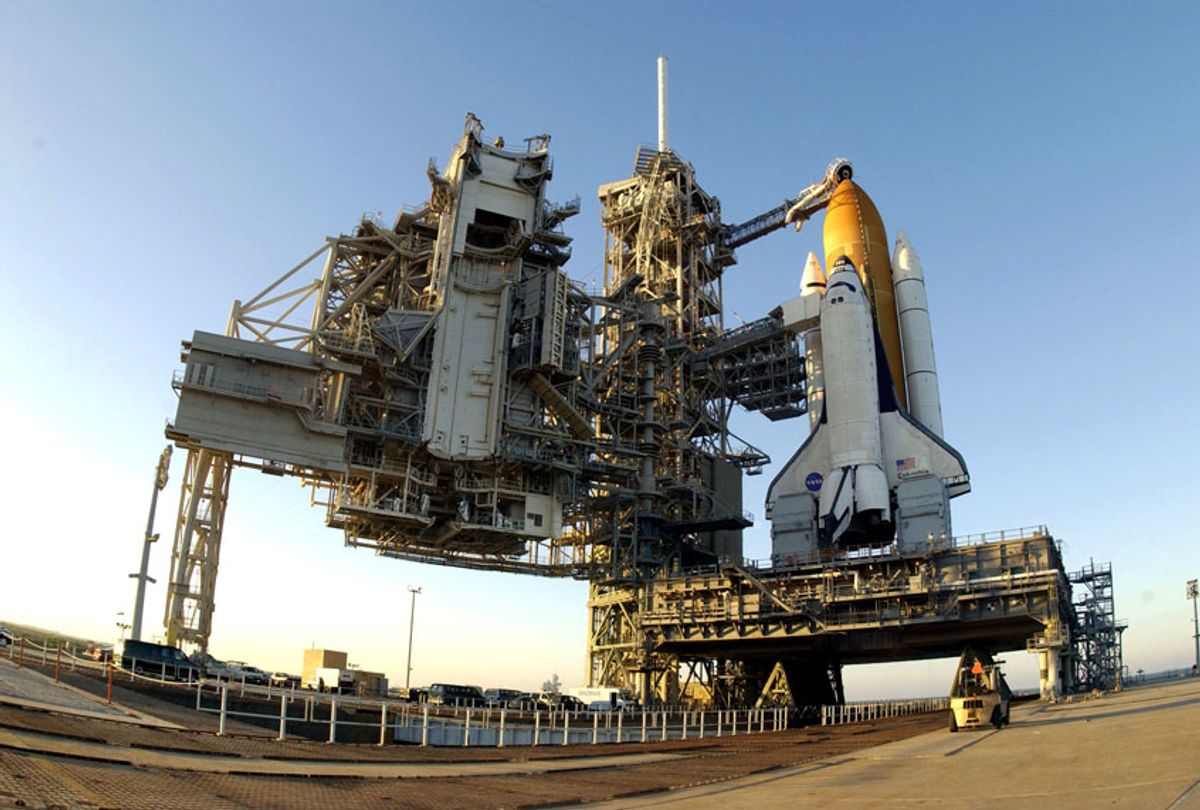 Twin sonic booms in rapid succession—one from the space shuttle’s nose and one from its vertical tail—were always the fanfare announcing the arrival of the majestic winged spacecraft. Three minutes and fifteen seconds before landing, as the shuttle glided toward Kennedy Space Center (KSC), the loud and unmistakable double concussion would be heard up and down Florida’s Space Coast. These booms would be our cue to start scanning the skies for our returning spacecraft, descending toward us at high speed in the distance.

Columbia and her crew of seven astronauts were coming home from sixteen days in orbit. After six million miles circling the Earth, they had reentered the atmosphere over the Pacific Ocean, crossed the California coast, and then flown over the Desert Southwest and Texas en route to Florida. These last few miles would be her victory lap in front of her astronaut crew members’ families and the KSC personnel who tended her on the ground.

As KSC’s launch director, I was one of the officials who would welcome Columbia home when she landed at 9:16 this cool morning. At 9:12, we listened and waited for the thunderous sonic booms, which would sound like the percussion of an artillery volley. But today the heavens were strangely silent.

I was confused and alarmed. I looked up at the clouds and turned to Wayne Hale, NASA’s former ascent and entry flight director, and asked him, “What do you think?”

He thought for a moment and responded with a single word: “Beacons.”

That one word hit me hard. The astronauts’ orange launch and entry suits were equipped with radio beacons in case the crew needed to bail out during a landing approach. Hale clearly knew the crew was in trouble. He was already thinking about how to find them.

The landing countdown clock positioned between the runway and us ticked down to zero. Then it began counting up. It always did this after shuttle landings, but we had never really paid attention to it because there had always been a vehicle on the runway and that clock had become irrelevant.

The shuttle is never late. It simply cannot be.

Columbia wasn’t here. She could not have landed elsewhere along the route. She was somewhere between orbit and KSC, but we didn’t know where.

I tried to sort out my thoughts. Something was horribly wrong. An indescribably empty feeling swept over me. My position as launch director was one of knowledge and control. Now I had neither.

Kennedy Space Center and Cape Canaveral have seen more than their share of disasters. A launch catastrophe is unmistakable—tremendous noise, a horrendous fireball, and smoking debris falling into the ocean. My mind flashed back to the frigid morning of January 28, 1986. I had been standing outside and seen Challenger lift off from pad 39B, only to disappear into a violent conflagration shortly afterward. I remember expecting—hoping—that Challenger would emerge from the fireball, fly around, and land behind me at the Shuttle Landing Facility. But we never saw Challenger again. I recalled leaving the site with a few friends as debris and smoke trails continued to rain down into the Atlantic, just off the coast. It was a terrible thing to witness.

This situation was completely different. Our emergency plans assumed that a landing problem would happen within sight of the runway, where a failed landing attempt would be immediately obvious to everyone. Today, there was nothing to see, nothing to hear. We had no idea what to do.

We all knew something awful must have happened to Columbia, but our senses could tell us nothing. The audio feed from Mission Control had gone eerily silent.

The breeze picked up. Low rippling clouds masked the sun. The quiet was broken only by a few cell phones that began ringing in the bleachers where spectators and the crew’s families were waiting. The astronauts in the ground support crew huddled briefly by the convoy command vehicle. Then they moved with quick determination toward the family viewing stand.

I glanced over at Sean O’Keefe, NASA’s administrator. He appeared to be in shock. O’Keefe’s associate administrator, former astronaut Bill Readdy, stood at his side. Readdy looked me in the eye and asked, “Contingency?” Unable to speak, I simply nodded.

Readdy carried a notebook containing NASA’s agency-wide contingency plan for spaceflight emergencies. Ever the pragmatist, O’Keefe had ordered this plan updated within hours of becoming administrator in late 2001. Now, barely one year later, the plan had to be activated. The procedures designated Readdy to make the official call. He told O’Keefe that he was declaring a spaceflight contingency.

Gathering my thoughts and trying to keep my emotions in check, I told the officials to meet me in my office back at the Launch Control Center (LCC), about two and a half miles to the south. We could confer there in private and get more information about the situation.

KSC security personnel and astronaut escorts quickly led the crew’s families away from viewing stands to a bus that would take them to the privacy of the crew quarters. The other spectators—many of whom were friends of the crew or members of the crew’s extended families—were also ushered to waiting buses.

There was no announcement of what had happened, but everyone knew that it must be something dreadful. Few words were spoken. People wept and hugged one another as their initial emptiness slowly filled with grief.

In the utterly inadequate jargon of astronauts and space workers, this was going to be a bad day.

As I hustled back to my vehicle, I had no idea how this horrible day would unfold—or how inspiring its aftermath would ultimately be.

While we stood beside the runway at Kennedy, residents of East Texas were waking up to a chilly February morning. The sun had not yet burned off the fog enshrouding the dense pine forests of the hilly countryside. Temperatures hovered just above freezing.

Most citizens of that part of the state were unaware that Columbia would be passing overhead on its way to Florida that morning. Many did not even know that NASA had a space shuttle in flight. It simply wasn’t something that concerned them.

FBI special agent Terry Lane lay half-asleep in bed at his home in Douglas, thirteen miles west of Nacogdoches. He thought he was dreaming about an unusual noise. He quickly realized that he was awake. The noise was real. A rumbling sound grew constantly louder and continued for several minutes. By the time he got out of bed and opened his front door, the noise had subsided.

Farther east, in Sabine County, near the Louisiana border, timber sale forester Greg Cohrs of the US Forest Service was also startled from his sleep. He heard a tremendous boom followed by a rumble that lasted for minutes. His wife Sandra put on her housecoat and opened the back door. She heard popping and crackling noises in the air above. Cohrs tried to imagine what could produce such a constant rumbling and banging. It was not a naturally occurring sound—certainly not thunder. His mind turned to worries about terrorism. Had Houston or New Orleans been destroyed by a nuclear explosion?

“Brother Fred” Raney, minister at First Baptist Church and captain of the volunteer fire department in the small town of Hemphill, heard such an intense blast that he thought the cross-county gas pipeline passing through Sabine County had ruptured. Hemphill’s funeral directors—John “Squeaky” Starr and his son Byron—also believed they heard a pipeline explosion. The constant rattling and booming had a rhythmic quality that sounded almost mechanical.

Elementary school teacher Sunny Whittington was in the barn at Hemphill’s youth arena. Her children both had animals entered in the county livestock show, and it was time for the first weigh-in. The open-sided structure began shuddering violently, punctuated by a tremendous noise that sounded to her like “a sonic boom multiplied by a thousand times.” People ran out of the arena. Whittington saw dozens of smoke trails, some spiraling and some going straight across the sky. She asked her husband, “Tommy, what’s happening?” He speculated that perhaps a plane was crashing or that two planes had collided.

House windows vibrated so intensely that people feared the glass would shatter. Knickknacks fell from shelves and dressers. The nonstop booms lasted several minutes, shaking US Forest Service law officer Doug Hamilton’s brick house to its foundations. Absolutely convinced that it was Judgment Day, he opened his front door and prepared to meet Jesus.

In addition to the booms, some residents heard sounds like helicopter blades, as large pieces of metal spun through the air and crashed into the ground. Fishermen on foggy Toledo Bend Reservoir heard things splashing into the water all around them. One large object—estimated by some to be the size of a small car—hit the water at tremendous speed, creating a wave that nearly swamped several boats.

Sabine County sheriff Tom Maddox was at his Hemphill office returning phone calls after being out of town the previous week. It was his son’s birthday, and he planned to spend the day with his family. He finished his final call and phoned his wife to say he was on his way home. Suddenly, the building shuddered so violently that he thought the jail’s roof had collapsed. As the noise subsided, all five of his phone lines lit up. One citizen reported that a plane had crashed in the north end of the county. Another reported a plane crash in the southern end of the county. The next caller said that the gas pipeline running through the county had exploded. A fourth caller said there was a train derailment in the western part of the county, between Pineland and Bronson. Maddox couldn’t believe that these disasters were occurring simultaneously all over the county. What was going on?

Hemphill’s Pat Smith had just settled down with a cup of coffee and turned on her TV. She saw on the news that Columbia would be passing overhead on its way to Florida. She said to her dog, “We might see that!” As she sipped her coffee, she heard an explosion followed by constant rattling. She ran outside. Her dog was running around in circles, barking up at the sky. She saw smoke trails going in every direction. She went back inside after a few minutes and heard on the news that NASA had lost contact with Columbia. She felt a lump in her throat when she realized what she had just witnessed.

Columbia had come apart in a “catastrophic event” 181,000 feet above Corsicana and Palestine, southeast of Dallas, traveling more than 11,000 mph. As the vehicle broke up, lighter pieces decelerated quickly and floated to earth. Denser objects like the shuttle’s main engines continued along a ballistic path at supersonic speed until they impacted the ground farther east.

Each one of the tens of thousands of pieces of debris produced its own sonic boom as it passed overhead.

Wreckage of the broken shuttle—and the remains of her crew—rained down over Texas and Louisiana for the next half hour along a path that was two hundred fifty miles long.