Is Miller manipulating Trump? Not at all; he's enabling the president's true, racist self. It's a love match 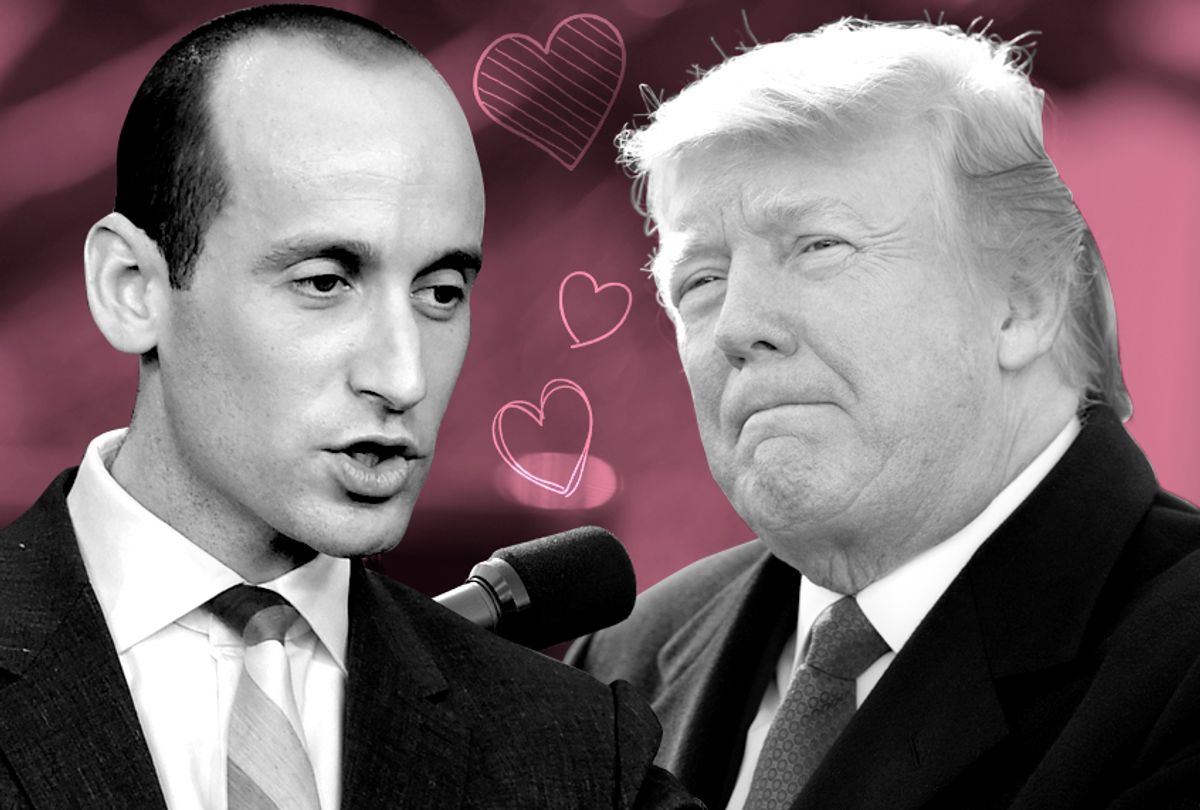 Surprising absolutely no one,  after a weekend of negotiations that went nowhere the Senate voted to kick the DACA can down the road for another three weeks and the government reopened on Tuesday morning. Supposedly, a bipartisan gang of 30 senators have Majority Leader Mitch McConnell's assurance that they'll get an up or down vote on the issue. History says, however, that Mitch will do what he needs to do. At this point, nobody is exactly sure what that is, not even Mitch.

The shortness of the shutdown was actually a testament to the extent of the impasse. The Republican congressional "leadership" and the few remaining GOP moderates are submissive to the dominatrixes of the hard right who demand total obedience. The only way they were going to get a DACA deal in this round was if the president took charge and brought his followers along. But according to the New York Times, Trump preferred to let his loyal lieutenants stonewall while he sat in front of the TV and "watched old TV clips of him berating President Barack Obama for a lack of leadership during the 2013 government shutdown."

As I wrote on Monday, Trump wants to deport undocumented immigrants. He campaigned for a year on the promise to mass-deport all 11 million of them, including the Dreamers and American-born children, within two years. His crowds screamed in ecstasy when said it. So the idea that he was going to be the voice of reason on the issue, despite his occasional foray into shallow sentimentality about "kids" and "love," was always far-fetched. He is as viscerally xenophobic as Stephen Miller, his top immigration lieutenant.

Nonetheless, some people, like Sen. Lindsey Graham, R-S.C.  would have the public believe that Miller mesmerized Trump into going against his better nature, ensuring negotiations would break down by constantly demanding more. But as this article in the Washington Post explains, contrary to popular myth, Miller wasn't making the president do anything he didn't already want to do. He was just helping Trump achieve his stated goals:

Mark Krikorian, executive director of the Center for Immigration Studies, said Trump has hawkish immigration views on a gut level but doesn’t necessarily understand all of the policy details and implications. He said Miller and Chief of Staff John F. Kelly — who also plays a crucial role in immigration policy — are “not so much yanking the president’s leash” as doing “the proper job of staff” by steering the president to his goals.

The article profiles Miller as an especially shrewd inside operator in Trump's White House, someone who has figured out how to both flatter and cajole the needy, insecure president while also helping him fulfill the central domestic promise of his campaign: stopping immigrants from nonwhite and non-Christian nations from entering the country, and deporting as many of them that are already here as possible. Miller knows that Trump wants to appear to be big-hearted and also that he focuses his decision-making on whom he can blame when things go wrong. So Miller has worked hard to make sure that Democrats will be blamed for any decision that hurts a sympathetic group like the Dreamers. He's loyal to Trump even at the expense of his previous mentor, Jeff Sessions. He's a facilitator and strategist who serves a man he believes in.

Miller is also a total jerk, which is yet another reason that Trump likes him so much. In this fascinating Los Angeles Times op-ed, Virginia Heffernan discusses the strange phenomenon of people around Trump taking on his own obnoxious personality traits. She notes that New York Times reporter Maggie Haberman, who covers the White House, tweeted: "Three Trump advisors have commented privately at various points that people around him/close to him begin to act like him." Heffernan also observes that even foreign leaders like Israel's Benjamin Netanyahu and Egypt's Abdel Fattah al-Sisi have taken to communicating in childish, Trump-like rants. And she makes a connection I haven't seen anyone make before:

Trump almost certainly counts the rhetorical subordination of these men as a win. After all, he devised his interpersonal strategies in the 1970s, when mentally dominating others was considered a fine art. The manual for "corporate warfare" in those days was "Power!" by Michael Korda, who ran in Trump's circles.

Korda advised aspirants to power to encroach on other people's space, keep them waiting on the phone, and force them to mirror you. The mirror tip sticks out: Evidently you can crush your enemies if you can force them to adopt your expressions, intonations, rhythms, gestures. Trump seems to have taken tips like these seriously ...

I have no idea whether Trump actually read Korda's book. But it was very much in vogue during his formative years as a New York celebrity entrepreneur and it's exactly the type of thing he would find appealing. As the editor in chief of Simon & Schuster and scion of a famous Hollywood family, Korda was a New York icon at the time and surely someone Trump would have seen as a role model.

The problem is that "Power!" was a satire of office politics (to be fair, Trump wouldn't have been the only one who failed to see that.) It would hardly be surprising if Trump modeled his "leadership" style on such silliness. It was surely written with men such as him in mind.

Heffernan's observation about "mirroring" as one of Trump's key tricks applies perfectly to Stephen Miller. Trump certainly appreciates Miller's hardline immigration stance, but it's his temperament he loves. According to the Washington Post, the president was thrilled that Miller got up in Secretary of State Rex Tillerson's face when others would not. And Trump loved Miller's recent combative appearance with CNN's Jake Tapper, even tweeting out a big "attaboy" to his millions of followers.

Miller isn't pulling Trump's strings. Nor is he obsequiously flattering him like a loyal servant, à la Lindsey Graham, which Trump likes but doesn't respect. Miller is "mirroring" Trump, which to the president is the best sign of respectful submission. The people in the Trump orbit who figure that out will be the ones with the most influence. The only person Trump will ever trust is someone who reminds him of himself.