Rick Perry: By exporting fossil fuels, the US is "exporting freedom" 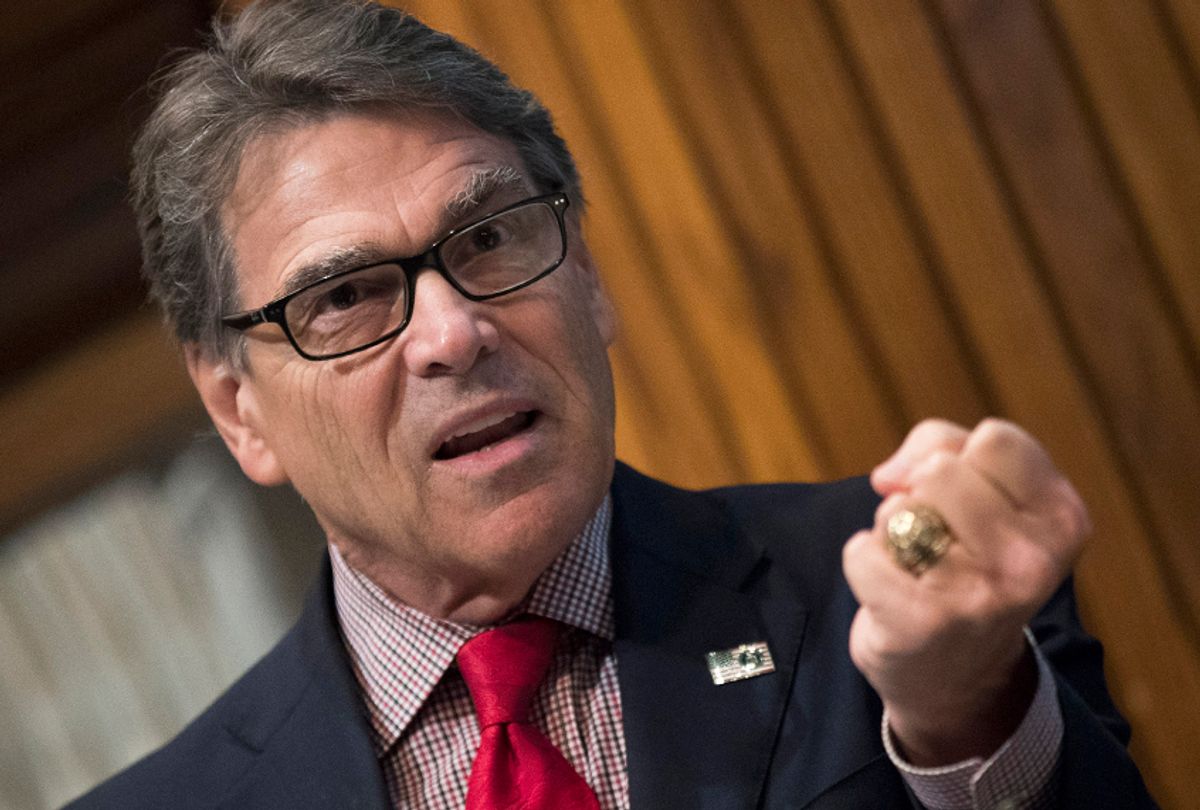 In an interview on Fox Business's “Mornings with Maria” from the World Economic Forum in Davos, Energy Secretary Rick Perry touted the idea that the Trump administration’s energy agenda is spreading “freedom” around the world.

“The United States is not just exporting energy, we’re exporting freedom,” Perry said in the interview, referring to exports of fossil fuels like oil and coal. “We’re exporting to our allies in Europe the opportunity to truly have a choice of where do you buy your energy from. That’s freedom. And that kind of freedom is priceless.”

If exporting energy means exporting "freedom" to Perry, one wonders why oil-rich authoritarian states like Saudi Arabia and Qatar aren't bastions of freedom.

Perry went on to say to our allies that America's energy exports come with a “no-strings attached” relationship.

“The United States isn’t about controlling a country with this energy. It’s about literally freeing up our allies around the world, letting them know that we’re going to be there for them. There’s no strings attached when you buy American [liquid natural gas]. So that’s world-changing.”

In what seemed like a barb aimed at OPEC, Perry also invited worldwide competition — but requested fair subsidies.

“You want to compete against the United States? Bring it. But don’t subsidize in a way that is unfair. Don’t get into the market and try to gobble all the market, and then all of the sudden, after you’ve choked everybody else out of the market, guess what, prices go up," he said.

In June 2017, the Trump administration publicly announced its push to make America “energy dominant,” which is part of what Perry lauded in the “Mornings with Maria” interview.

“President Trump wants America to achieve energy dominance by utilizing our abundant resources for good, both here and abroad,” Perry said in a June press briefing. “And an energy-dominant America means self-reliant, it means a secure nation, free from the geopolitical turmoil of other nations who seek to use energy as an economic weapon.”

According to the U.S. Energy Information Administration, America’s fossil fuel production will reach a record-high level in 2018—and is on track to set a record in 2019.

Earlier this week, Trump announced that the administration plans on issuing tariffs on solar panels—a move that could set back the renewable energy industry, and exemplifies the administration's head-in-the-sand stance on climate change and rah-rah feelings about fossil fuels. According to NASA research, burning fossil fuels is a major contributor to the increase in atmospheric carbon dioxide, a primary cause of climate change.

Most alarming about Perry’s disconcerting pro-fossil fuel rhetoric is that it once again bucks the conventional wisdom on a major world initiative, the Paris Climate Agreement, which was created to develop a global solution to cut down on greenhouse gas emissions — in other words, to stop humanity's march towards ruining the planet through a climate apocalypse. Like his superiors, Perry is intent on marching faster towards doomsday.