The radio host, who was for invading Iraq, now thinks it's a liberal plot because . . . Trump? 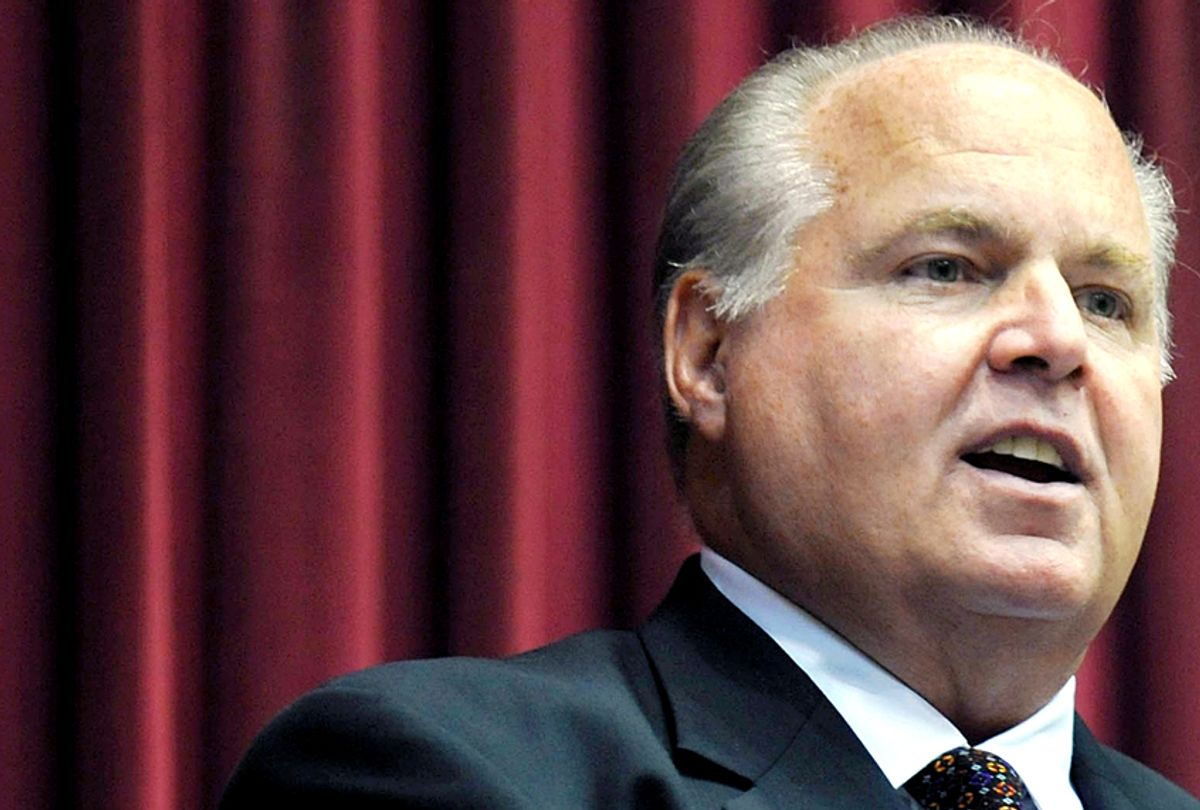 "For some reason," conservative talk show radio host Rush Limbaugh "was thinking about the war in Iraq," as he said on the Tuesday edition of his radio show. There, he asserted that the intelligence community — led by Democratic elements of the "deep state" -- fabricated intelligence to "damage" former President George W. Bush.

He went on to rehash the ultimately disproven theory, forwarded by the Bush administration, that Saddam Hussein's Ba'athist government had developed and stockpiled weapons of mass destruction (WMDs) that it intended to use on the U.S. and its allies. This was, of course, the much-contested pretext for the U.S. invasion and occupation of Iraq in 2003.

Even though multiple reports suggest elements of the Bush administration shaped and sometimes rewrote intelligence reports to suggest the existence of robust WMD programs where none existed, Limbaugh asserted that it was the Democrats and various government agencies who created that false intel in order to take down a Republican president.

The Democrat [sic] Party is the Washington establishment, and the Washington establishment believes that Gore won the presidency, that the Florida recount aftermath was bogus and rigged, that James Baker did a better job than the Democrat people did in finding votes, the "hanging chads." What if the intel on the war in Iraq was another disinformation campaign, to damage another Republican president? And boy, did that work.

What if the quote-unquote "intelligence community" misrepresented, on purpose, the degree to which Hussein had WMDs? Because I'll tell you it was a very, very embarrassing moment for the Bush administration.

Limbaugh added, "What if Saddam weapons of mass destruction was also a false narrative designed to — what, did it ultimately embarrass Bush? Did it weaken the US military? Did it — whatever it did, I mean, it opened the doors for the Democrats to literally destroy his presidency in the second term, which is what they did."

"What if, based on what we know now, we know how the 'deep state' has been trying to undermine Donald Trump since the days he was a candidate, to during his transition, to even it's ongoing now as president?" Limbaugh very rhetorically asked.

Regardless of any opinions one may have on the relationship between the executive branch and the intelligence community, Limbaugh's assertion is nothing more than bizarre, revisionist history that contains a lot of "what ifs" and no substance.

It's unhinged, classic Limbaugh web spinning, to be sure — but it's easy to see this Alex Jones-level conspiracy as less a robust defense of Bush than a cynical, fringe-styled bid to help President Donald Trump.

In recent months, Republicans and most conservative media punditry have launched a crusade to upend the ongoing investigation by special counsel Robert Mueller into the Trump campaign's alleged ties with the Russian government.

In it, many have sought to delegitimize the work of the FBI by stoking fears of a so-called "deep state" — an unseen, all-powerful shadow government of liberal bureaucrats led by former president Barack Obama and Hillary Clinton working to undermine and unseat Trump and — who knows? — foster the UN takeover of the United States.

Limbaugh, Jones, Fox News, Trump advocates, administration appointees and Republican politicians have all made mention of this "deep state" in recent months, helpfully reframing the president's various legislative and policy failures as results not of his shortcomings as a leader, but as the work of a mysterious, unpatriotic cabal.

But the cabal wasn't always responsible for the corrupt WMD intelligence, in Limbaugh's eyes. In 2014, a decade after the WMD reports were exposed as crude myths, he penned an article titled, "The Iraq War Wasn't a Disaster — It Was Necessary." At the time, Limbaugh wrote:

Going into Iraq was not to avenge an assassination attempt on George H. W. Bush, and it wasn’t about Halliburton. It was about somebody taking a threat seriously and taking preventive action and not waiting to be hit again. Saddam was bragging all over the place about all the weapons of mass destruction he had, and they were toying around with creating a nuke, and everybody knew he had and tried to. Now, at the time this is happening, you can’t afford to sit around and say, "Nah, he can’t do it. Nah, he doesn’t mean it. Nah, he’s just bragging." You don’t have that luxury.

The Democrats supported it for a couple of weeks, but that’s as long as they could go and then they turned it political and that was the end. They spent the next five years trying to delegitimize the whole thing. In my mind it had a valid purpose.

And what has changed in the few years since he wrote those words? Trump.

Watch the full clip of Limbaugh via Media Matters For America, below: