9 explosive claims from Michael Wolff's book that the media missed

From the KKK to Richard Nixon, a multiplicity of horrifying accounts emerge 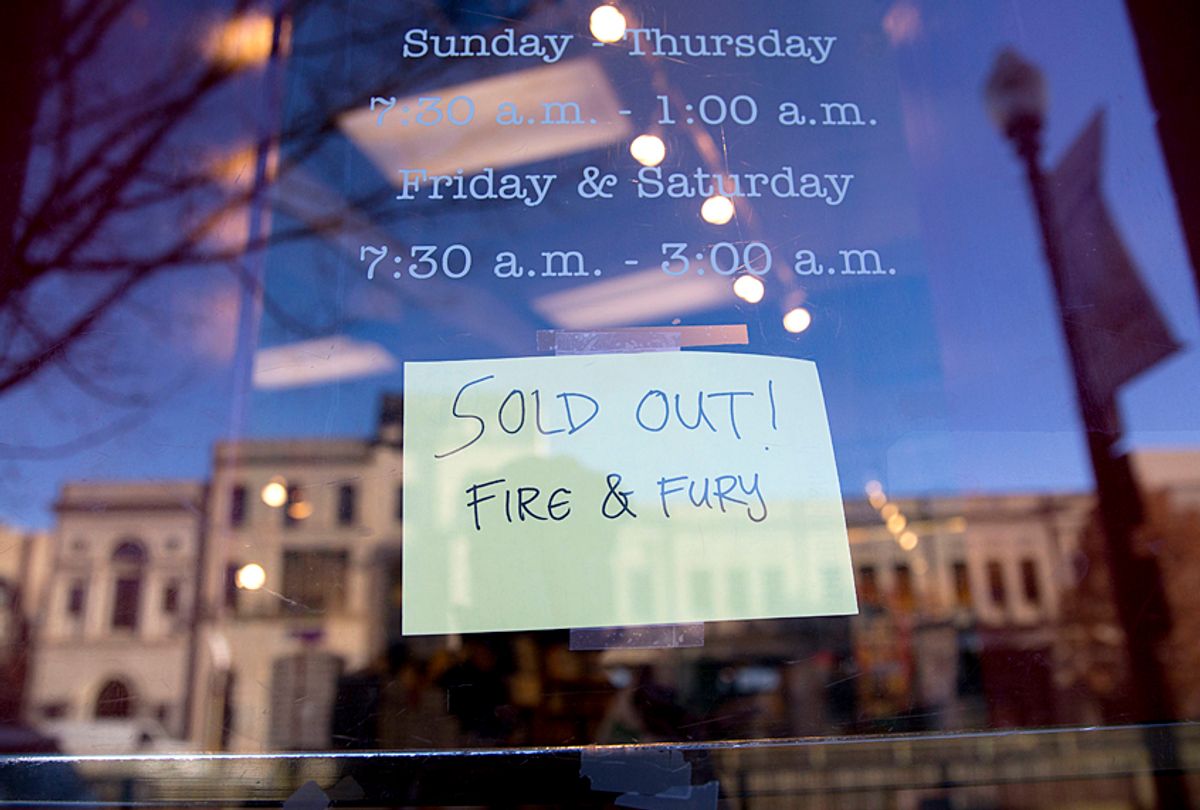 Sign showing that the book "Fire and Fury: Inside the Trump White House" is sold out at a bookstore (AP/Pablo Martinez Monsivais)
--

The ramifications of Michael Wolff’s "Fire and Fury: Inside the Trump White House" are still being felt as the author uses interview appearances to maintain a place in the news cycle. The book has already resulted in the ouster of White House chief strategist Steve Bannon, whose extreme nationalist views were among the strongest influences on President Trump’s administration.

On Friday, Wolff claimed during an interview on HBO’s "Real Time with Bill Maher" that Trump is having an affair while in the White House. Wolff said the information can be read “between the lines” in the book. Some have wondered whether the subject is U.N. ambassador Nikki Haley.

While the award-winning Wolff’s factual reliability is a matter of continued debate, his book is anchored by hours of recorded interviews and copious notes. Many of the most explosive allegations have yet to be examined at-large in the mainstream media. Here are some of the most disturbing and fascinating claims found in the pages of "Fire and Fury."

1. Ann Coulter tried to stop Trump from employing his children.

“In defiance of law and tone, and everybody’s disbelieving looks, the president seemed intent on surrounding himself in the White House with his family,” Wolff writes. “The Trumps, all of them — except for his wife, who, mystifyingly, was staying in New York — were moving in, all of them set to assume responsibilities similar to their status in the Trump Organization, without anyone apparently counseling against it.”

But one far-right figure was dead-set against Trump’s plan to include his family in the administration.

Wolff writes, “Trump supporter Ann Coulter . . . took the president-elect aside and said, ‘Nobody is apparently telling you this. But you can’t. You just can’t hire your children.’”

2. Jared Kushner is the victim of anti-Semitism in the White House.

Trump has a strong tendency to reduce people to their ethnic identities. His own son-in-law didn’t escape his bigotry, as Trump applied Jewish stereotyping to his own family.

The coding of “globalism” and financial language in Trumpism create a silent tension in which anti-Semitic populists quietly fight against perceived Jewish “globalist” elements in the White House.

“In the Trump White House, it is a war between the Jews and the non-Jews,” former Secretary of State Henry Kissinger explains.

“For Trump, giving Israel to Kushner was not only a test, it was a Jewish test: the president was singling him out for being Jewish, rewarding him for being Jewish, saddling him with an impossible hurdle for being Jewish — and, too, defaulting to the stereotyping belief in the negotiating powers of Jews,” Wolff writes. “‘Henry Kissinger says Jared is going to be the new Henry Kissinger,’ Trump said more than once, rather a combined compliment and slur.”

The president had to be coached by his right-wing handlers to prevent him from embracing socialized medicine.

“All things considered, he probably preferred the notion of more people having health insurance than fewer people having it. He was even, when push came to shove, rather more for Obamacare than for repealing Obamacare,” Wolff writes.

“As well, he had made a set of rash Obama-like promises, going so far as to say that under a forthcoming Trumpcare plan (he had to be strongly discouraged from using this kind of rebranding — political wise men told him that this was one instance where he might not want to claim ownership with his name), no one would lose their health insurance, and that preexisting conditions would continue to be covered. In fact, he probably favored government-funded health care more than any other Republican.”

While the conclusion is the opinion of the author, a direct quote attributed to Trump is eyebrow-raising. It finds Trump flat-out toying with a health care solution to the left of the traditional Democratic position.

“‘Why can’t Medicare simply cover everybody?’ [Trump] had impatiently wondered aloud during one discussion with aides, all of whom were careful not to react to this heresy,” Wolff writes.

4. Steve Bannon wanted to succeed Trump as president of the United States.

Wolff observes that campaign manager Kellyanne Conway did not seem to be the actual person pulling the strings of Trump’s 2016 campaign. That person was Steve Bannon.

“Her title was campaign manager, but that was a misnomer. Bannon was the real manager, and she was the senior pollster,” Wolff explains. “But Bannon shortly replaced her in that role and she was left in what Trump saw as the vastly more important role of cable spokesperson.”

“This is all about money laundering,” he reportedly predicted of the Mueller investigation. “Mueller chose Weissmann first and he is a money laundering guy. Their path to f**king Trump goes right through Paul Manafort, Don Jr., and Jared Kushner."

“They’re sitting on a beach trying to stop a Category Five,” he summarized.

While Bannon often referred to himself as “President Bannon,” Wolff writes that he has stopped the tongue-in-cheek references to his own power and openly expresses a plan to run for president in 2020.

5. Hope Hicks is the subject of abuse as Trump keeps her close.

Among the most troubling elements of Wolff’s account are the segments about Hope Hicks. Wolff portrays Hicks as being on the receiving end of bullying behavior, including sexual harassment, from Trump and his White House.

“Hicks’s family increasingly, and incredulously, viewed her as rather having been taken captive,” Wolff writes. “Following the Trump victory and her move into the White House, her friends and intimates talked with great concern about what kind of therapies and recuperation she would need after her tenure was finally over.”

Wolff explains that Hicks filled more of a traditional daughter role for Trump than Ivanka did, except that he exploited her when it served his options, treating her like a personal servant.

“Hicks was the president’s chief media handler. She worked by the president’s side, wholly separate from the White House’s forty-person-strong communications office,” Wolff explains.

“You must be the world’s worst PR person,” Trump would say playfully if the media was particularly critical of him on a given day.

Hicks’ function was to serve the whims of Trump, as she wasn’t qualified or politically experienced. “The problem isn’t Twitter, it’s Hope,” a communication staffer explained.

One account describes a “loud, scary, clearly threatening” Bannon screaming at Hicks, “I am going to f**k you and your little group!” Hicks reportedly fled the scene, “visibly terrified” and “hysterically sobbing.” The president merely inquired: “What’s going on?”

Another anecdote finds Hicks fleeing yet another room after the president humiliates her following an alleged romance with Corey Lewandowski. When Hicks asked how Lewandowski could best be protected from the media, Trump told her that she’d already “done enough” for him, saying, “You’re the best piece of tail he’ll ever have.”

John Wesley Dean III served as White House counsel during the administration of President Richard Nixon. He became a witness for the FBI amid the Watergate scandal in exchange for a plea deal. Now, Dean is an author and political commentator, and Trump is reportedly obsessed with him.

“Trump, who saw history through personalities — people he might have liked or disliked — was a John Dean freak. He went bananas when a now gray and much aged Dean appeared on talk shows to compare the Trump-Russia investigation to Watergate,” Wolff writes. “That would bring the president to instant attention and launch an inevitable talk-back monologue to the screen about loyalty and what people would do for media attention.”

Trump’s obsession is linked to a disturbing refusal to accept the historical record about the Nixon administration.

Wolff writes that the president's tirades about Dean were "accompanied by several revisionist theories Trump had about Watergate and how Nixon had been framed.”

7. The war in Afghanistan infuriates Trump for its lack of profitability.

“For two hours, he angrily railed against the mess he had been handed. He threatened to fire almost every general in the chain of command,” Wolff writes of Trump’s dissatisfaction with the plan his officials created for continuing the war with Afghanistan. “He couldn’t fathom, he said, how it had taken so many months of study to come up with this nothing-much-different plan.”

Per usual, Trump was only interested in war for its profitability. “He disparaged the advice that came from generals and praised the advice from enlisted men. If we have to be in Afghanistan, he demanded, why can’t we make money off it?”

“China has mining rights, but not the United States,” Trump continues in the account, before comparing the failed war strategy with a situation involving a New York restaurant needing a bigger kitchen.

8. Trump is sympathetic to the contemporary KKK.

The president’s bizarre blame-game after violent white supremacists terrorized Charlottesville, Virginia, gave the public a window into his private beliefs.

He blamed “many sides” for the violence, despite the fact that only one side was populated by neo-Nazis screaming, “Jews will not replace us.”

Trump’s sympathy for hate groups applies to the KKK, according to Wolff.

The author states that Trump also denies his own father’s established connection to the KKK, which may explain his attempts at rationalization.

9. Trump planned to lose the 2016 election and was 'horrified' when he won.

Outlets focused on the negative response Melania Trump was reported to have upon learning of Trump’s victory. Much less coverage was dedicated to how Trump felt about winning the presidency.

Steve Bannon described a "befuddled Trump morphing into a disbelieving Trump and then into a quite horrified Trump.” Don Jr. reportedly told a friend that his father “looked as if he had seen a ghost.”

But Trump quickly morphed in a way that will sound familiar to those who have watched him occupy the office for the past year.

“[S]till to come was the final transformation: suddenly, Donald Trump became a man who believed that he deserved to be and was wholly capable of being the president of the United States,” Wolff writes.