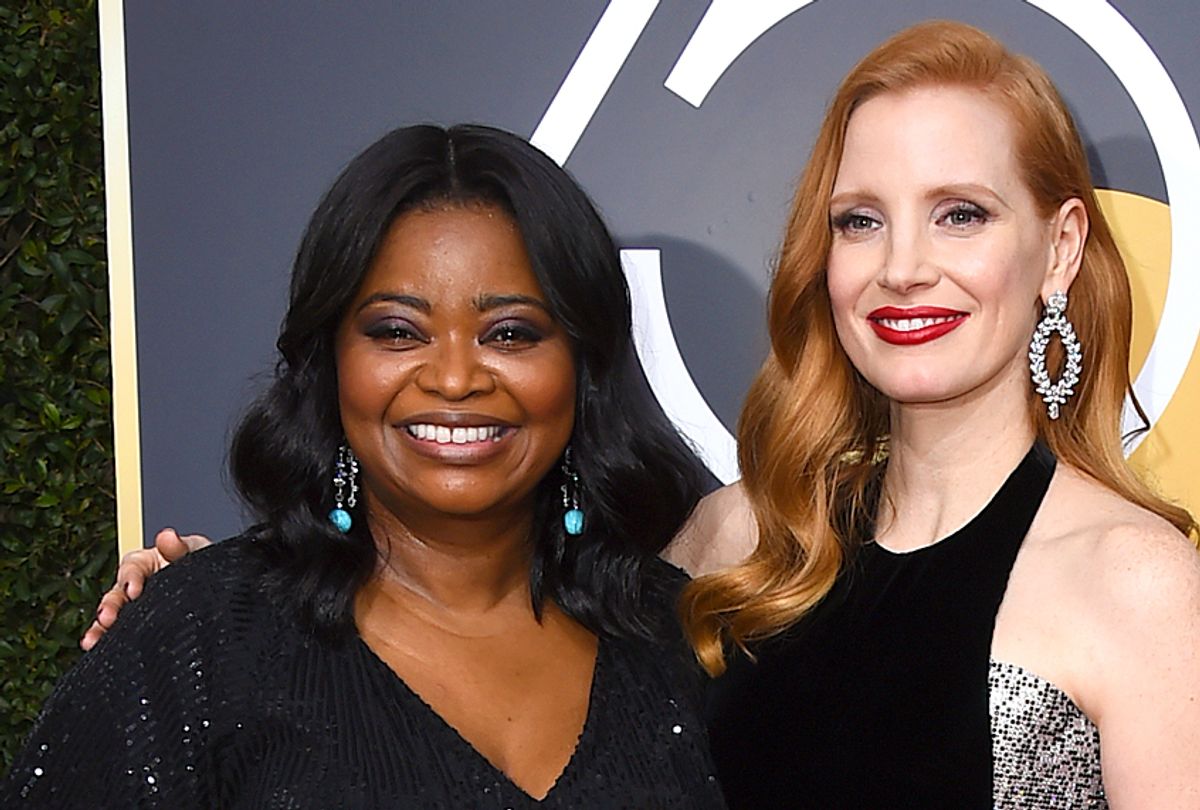 "I have a story, and you guys are gonna be the first to hear it," Spencer told a panel on Women Breaking Barriers at the Sundance Film Festival. She said that her good friend Jessica Chastain, with whom she worked on "The Help," approached her about 15 months ago to work together on another project.

"She wants to do comedies, and I wanna break out of period pieces," Spencer added to the audience's amusement. "I love ’em! They’ve been kind to me! But I kinda wanna play someone who resembles me in some fashion."

Some months later, she says she and Chastain began talking about pay equity between men and women. Chastain was adamant that women must get equal pay to men, which Spencer agreed with. "We were dropping F-bombs and getting it all out there."

But then the conversation took an important turn, according to Spencer. "I said, 'But here’s the thing, women of color on that spectrum, we make far less than white women. So, if we’re gonna have that conversation about pay equity, we gotta bring the women of color to the table,'" Spencer added. "And I told her my story, and we talked numbers, and she was quiet, and she said she had no idea that that’s what it was like for women of color."

Spencer got choked up but assured the audience that "these are happy tears!" She continued, "I love that woman, because she’s walking the walk and she’s actually talking the talk. She said, 'Octavia, we’re gonna get you paid on this film,'" Spencer told the crowd. Chastain told her, "'You and I are gonna be tied together. We’re gonna be favored nations, and we’re gonna make the same thing' . . . Fast forward to last week, we’re making five times what we asked for."

The crowd cheered and Spencer added, "Now, I wanna go to what the men are making!"

It's a refreshing, if somewhat problematic, story about a white woman in Hollywood mobilizing her privilege beyond her own benefit. As Jada Pinkett Smith said, "It's nice to go out and march, we can do that. It's nice to wear black at the Golden Globes, it's nice to do that. But what are we doing behind closed doors?"

This is a powerful lesson for other white woman who say they care about equal pay, and it's exactly what powerful white women should be doing. Still, it's nonetheless frustrating that an incredible, Oscar-nominated actor like Octavia Spencer needs a white woman to convince production companies of how valuable she is, even though she demonstrates it in every film she's in.

Hopefully, other powerful white women will follow suit in demanding equal pay for their counterparts. More crucially, perhaps hopefully, men will start doing the same for women co-stars. This could be the blueprint for real change in Hollywood, since waiting for the industry's gatekeepers is proving to be a long and unfulfilling process.

Of course, the ideal is that one day Hollywood and the world at large won't need a white man or woman at the center forcing equality for their colleagues of color. Until then, it seems such allies are needed.