Hundreds are running for Congress, but the Democratic Party and progressive groups have only endorsed a few dozen 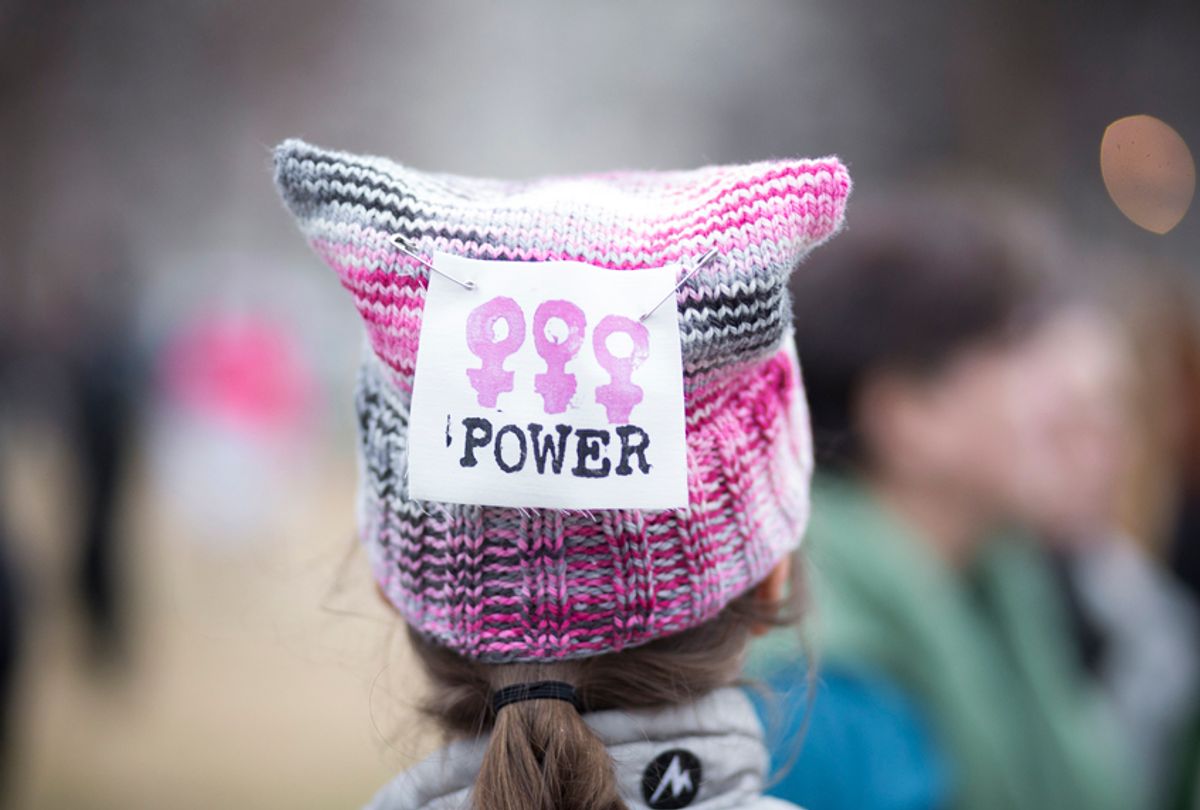 Politics in the Trump era often seems like a hall of mirrors and mirages. But something significant and undeniable is happening across the country that goes deeper than the White House’s daily distortions or whether dealing with Trump is like negotiating with Jell-O.

Across the country, the first big political wave of 2018 isn’t voters — it’s candidates lining up for Democratic primaries up and down the ladder in unprecedented volumes. And just as many mainstream media outlets underreported the flood of women who marched last weekend (it wasn’t thousands, it was millions), this flood of candidates is led by progressive women.

“To date, 390 women are planning to run for the House of Representatives, a figure that’s higher than at any point in American history,” wrote Rebecca Traister, for New York magazine’s January 23 issue. “Twenty-two of them are non-incumbent black women — for scale, there are only 18 black women in the House right now. Meanwhile, 49 women are likely to be running for the Senate, more than 68 percent higher than the number who’d announced at the same point in 2014.”

“A year ago, when millions of women stormed the streets in women’s marches to proclaim their outrage and despair at the inauguration of Donald T. Trump, no one knew whether it was a moment or a movement,” wrote the New York Times’ Susan Chira on Sunday. “Now the answer is coming into focus.”

It’s clearly a movement. But it’s one that remains largely under the political media’s radar. And it's also a movement that has not been helped by the Democratic Party's campaign committees, which haven't lined up behind many newcomers, just as endorsements by leading progressive groups don't reflect their numbers.

"Across the country, the DCCC [Democratic Congressional Campaign Committee], its allied groups, or leaders within the Democratic Party are working hard against some of these new candidates for Congress, publicly backing their more established opponents, according to interviews with more than 50 candidates, party operatives, and members of Congress," wrote Ryan Grimm and Lee Fang in a detailed report in The Intercept. "Winning the support of Washington heavyweights, including the DCCC — implicit or explicit — is critical for endorsements back home and a boost to fundraising. In general, it can give a candidate a tremendous advantage over opponents in a Democratic primary."

Anyone paying attention to national politics knows that 2018 is shaping up to be a wave election year. Recent elections are showing that Democrats voters are turning out in record numbers, while Republican voters are unenthused or staying home. But that doesn't mean that the national Democratic Party operatives or the capital-based media grasp what's unfolding in the hinterlands.

Take last weekend's marches. The Tea Party protests in early 2010 never came close to 400 events in one day like last Saturday’s women’s marches, which drew between 1.9 million and 2.6 million participants, according to a nationwide compilation of more than 400 events by the University of Denver’s Erica Chenoweth and the University of Connecticut’s Jeremy Pressman.

Those who participated were buoyant and optimistic about carrying their momentum forward. “Leave it to women to get the job done! Those protesters will each bring 10 friends to the polls in 2018 and 2020!” tweeted Rita Solnet, president of Parents Across Florida.

Solnet’s enthusiasm for women candidates and a women-led turnout wave this year is echoed in the comments from experts who have studied women in electoral politics, traced their runs, and noted that 2018 is shaping up to be different from the past.

Of the women running for the House, Chira reported, “314 are Democrats and 184 of them are running for seats held by Republicans. Nineteen Democratic women are challenging incumbents in their own party in primaries. That fervor extends beyond the federal level: 79 women say they are running for governor... [Debbie] Walsh [director of the Rutgers Center for American Women and Politics] thinks it’s possible that 15 women, a record, could withstand primaries and run for governor in general elections.”

Nonetheless, these historic numbers and upbeat assessments have not been in the forefront of mainstream coverage. A nationwide poll by the Washington Post/ABC TV taken days before the marches found support for generic Democratic candidates was far ahead of generic Republicans (a measure for party-line voters). The poll asked about Trump, the economy, Russian collusion in 2016, immigration and the federal shutdown, but nothing on the cultural issues surrounding male power and the #MeToo movement.

This missing the obvious also extends to women running for office. The candidate endorsements from the leading progressive political organizations are relatively thin, compared to the surge tallied by the Rutgers Center for American Women and Politics.

To be fair, these mostly seasoned political outfits know how hard it is to propel newcomers to federal election victories. But there’s something that's out of sync, which the Intercept documented in listing a half-dozen promising progressive candidates who were rejected by the DCCC because they couldn't raise six figures, as opposed to looking at their grassroots support as the key metric.

That old-school frame, which elevates candidates with ties to big money or personal wealth, has been rejected by new groups like Run for Something, which urges millennials to seek local office as part of “building a Democratic bench,” and last week announced 61 new endorsements for 2018. “Many of our endorsed candidates running in competitive primaries; many others are running in elections that Democrats haven’t contested in literally decades,” the press release said. “They’re all running strong campaigns focused on voter contact, local issues, and authentic connections to their communities.”

What's jarring are the glimpses of candidates who have been rejected by the DCCC in favor of handpicked insiders, compared to the ones lauded in glowing sketches that suggest there is plenty of new blood waiting to invigorate the Democratic Party. The more optimistic side of this ledger can be seen in Traister’s sketches of candidates for New York magazine:

“And Democratic women aren’t leaving the men of their own party undisturbed. In Minnesota, former FBI analyst Leah Phifer is challenging incumbent Democratic representative Rick Nolan; Sameena Mustafa, a tenant advocate and founder of the comedy troupe Simmer Brown, is primarying Democrat Mike Quigley in Illinois’s Fifth District. And Chelsea Manning, former Army intelligence analyst and whistle-blower, announced recently that she’s going after Ben Cardin, the 74-year-old who has held one of Maryland’s Senate seats for 11 years and served in the House for 20 years before that.”

But if there’s energy and excitement about the newest wave of candidates, there’s also the reality that the Democratic Party's campaign infrastructure has been slow to get behind the wave of candidates seeking to run under their banner, she notes.

“The DCCC’s [spokeswoman] Meredith Kelly points out that half of the 18 House races that have so far earned the organization’s ‘Red to Blue’ designation — a signal to donors to invest — feature women,” writes Traister." But that’s nine out of the 390 women running for the House; there are still a hell of a lot of highly motivated novices struggling to stay afloat against guys with more cash, experience, and connections. ‘Not throwing every dollar behind the exciting new women candidates, especially women of color,’ [Erin] Vilardi [who runs VoteRunLead and trains candidates] says, ‘is missing the political moment if I ever did see it.’"

There’s no shortage of recent examples of Washington-based Democrats missing the moment. But this early in the 2018 cycle, months before the first primaries start in March, gives motivated grassroots progressives an opening to assist campaigns that need help. Now is the time in political cycles when candidates are the most accessible, when political relationships that will endure can be forged, and when seemingly small individual efforts in the lowest-turnout elections, primaries, can make the biggest difference.

The millions of woman marching this past weekend know they are onto something. The vast majority of phone calls to Congress last year protesting the GOP’s attacks on Obamacare were made by women. As John Cassidy wrote for The New Yorker on Monday, where he also noted that mainstream media coverage overplayed the latest federal shutdown and underplayed the women’s marches, “This emerging constituency, which believes the Trump presidency represents a national emergency, isn’t going anywhere, except to the next protest or political meeting.”

“Just as the Tea Party provided the Republican Party of 2010 with the organizers and doorbell-ringers that are so important in off-year elections, many of the attendees at this weekend’s women’s marches will be working from now until November to turn Trump into a lame duck,” he continued. “Their attitude, defiant and determined, was summed up by a pair of signs held by two marchers in Washington, D.C. The signs said: 'GRAB ’EM BY THE MIDTERMS.'”