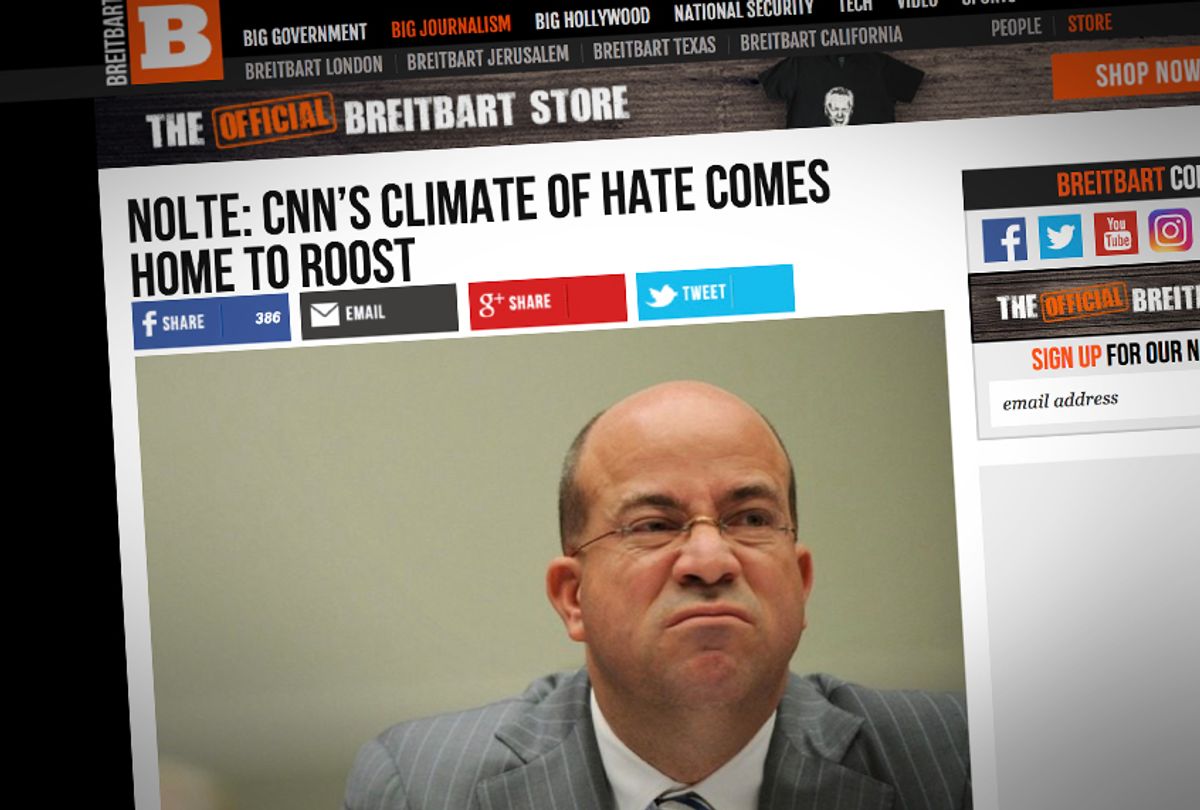 In the article, “CNN’s Climate of Hate Comes Home to Roost,” Nolte writes:

Thus far, CNN’s ever-increasing climate of hate has only brought misery, fear, and violence to others — to CNN’s intended victims on the political right. Last week, however, CNN got its own taste of that misery and fear.

On Tuesday, CNN reported that a Michigan man, Brandon Griesemer, made 22 calls to CNN on January 9 and 10 which contained threats. Griesemer appeared in US District Court and was charged with transmitting interstate communications with the intent to extort and threat to injure, but released on a $10,000 bond.

According to an affidavit obtained by CNN, Griesemer said, “Fake news. I'm coming to gun you all down," and "I am on my way right now to gun the f****** CNN cast down .... I am coming to kill you.”

"I'm smarter than you. More powerful than you. I have more guns than you. More manpower. Your cast is about to get gunned down in a matter of hours," Griesemer said, according the affidavit.

CNN posted a statement on Twitter explaining that they take all threats seriously. CNN Tonight host Don Lemon spoke about the threats on the show, saying there’s nothing “random” about the arrest of Griesemer. Lemon argued that this is what happens when “the president of the United States, Donald Trump, repeatedly attacks members of the press simply for reporting facts that he does not like.”

Indeed, Trump has repeatedly tried to whip up public fervor against journalists, specifically those from outlets who routinely criticize him. The Committee to Protect Journalists criticized Trump's rhetoric for stifling free speech. "Targeting individual journalists or media outlets, on or offline, creates a chilling effect and fosters an environment where further harassment or even physical attack is deemed acceptable," the Committee wrote in a recent release.

Last summer, Trump tweeted an edited GIF that depicted him body-slamming a wrestler whose head was the CNN logo. "Trump's most recent use of Twitter to threaten his enemies at CNN with violence is part of a larger pattern," Salon writer Chauncey DeVega wrote at the time. DeVega continued:

Last week, Trump also used Twitter to disparage MSNBC's  Joe Scarborough and Mika Brzezinski. Since the presidential election last November, Trump has continued to use social media to harass, insult, denigrate and browbeat his rivals. Trump also uses Twitter as one of his primary weapons in his fascist-style war on reality and truth. Predictably, his critics have responded with claims that Trump's use of Twitter and other social media are embarrassing and beneath the office of the presidency.

Breitbart’s appalling article seemingly condoning such behavior is a masterclass in double-speak. Nolte claims in his piece that he is not condoning violence, “no matter how deliberately provocative or intentionally dishonest CNN chooses to be." But then he blames the victim, implying the threats against CNN are CNN's fault. "It is probably not a coincidence that the threats began after an especially provocative week of fake news at CNN," he wrote.

“Maybe now that CNN has provoked threats of violence against itself, Zucker and his on-air surrogates will ease up a bit on the belligerent trolling and provocations in order to adapt a New Tone that includes tolerance of outside ideas and a focus on integrity, facts, and honesty — as opposed to the fire hose of fake news,” Nolte continued.

“The idea that CNN is willing to play with fire when no one wants to see anyone over there get hurt is, to say the least, a disturbing spectacle,” Nolte concluded.

Understandably, Breitbart is one of the few "news" outlets that the president trusts.

Nolte has a reputation for being a noxious political personality. On Twitter, he presents himself as a conservative who continually misses the point on current affairs. Nolte recently tweeted that the #MeToo movement has revealed that some women have “lousy parents” who didn’t teach them how to say no.