Work requirements don't work: There are better ways to get people off welfare 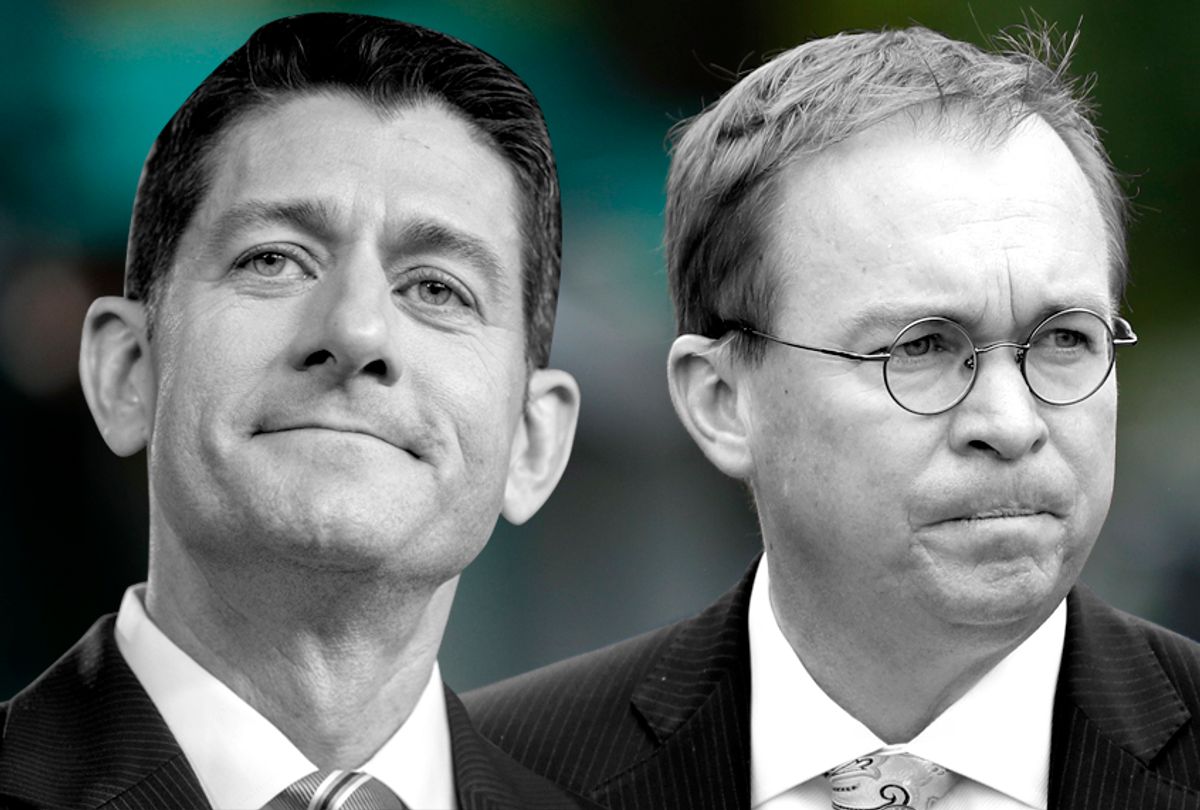 This article originally appeared on the Niskanen Center website. Republished by permission.

The Trump administration has begun allowing states to impose work requirements for able-bodied, working-age adults as a condition for Medicaid. Work requirements are an old idea. They have been around since the days of the poorhouse. True, poorhouses were an improvement over the still older system of auctioning off poor people as slaves, but we can do better than that.

Modern supporters of work requirements, like the leaders of the poorhouse movement, see themselves as having the best of intentions. Some hope that work requirements will help lift people out of poverty by giving them the nudge they need to become self-supporting. Others believe that they will strengthen the economy by increasing labor force participation. Others think they will fix government budgets by cutting entitlement spending. But good intentions are not enough. They must be channeled through programs that actually work.

Work requirements don’t work. They have not worked in the past, and they won’t work for Medicaid. Here are some of the reasons why, and some better ideas for moving people from welfare into the labor force.

Work requirements featured prominently in the welfare reforms of the 1990s. Their effects were initially promising, but they soon faded. Some of the best available data from that period come from a set of controlled experiments called the National Evaluation of Welfare-to-Work Strategies. Eleven such experiments were conducted in seven cities over a span of five years. Each compared a group of single-parent welfare recipients who were subject to work requirements, known as “program groups,” with a control group that faced no such requirements. Several thousand people participated.

Work requirements did raise the number of people who found employment, but the effects were surprisingly small. In the most successful experiment, conducted in Portland, Oregon, work requirements were backed up by intensive, one-on-one counseling. There, the share of people who found work during at least one calendar quarter of the five-year experimental period increased by 4.1 percentage points, from 81.7 percent to 85.8 percent. The effects were smaller elsewhere. In five of the experiments, there was no statistically significant effect. In one case, people in the control group were actually more likely to work than those subject to work requirements.

Because even a small increase in work meant a decrease in welfare benefits, taxpayers did see some gains. However, the same was not always true for participants. Ten of the experiments tracked combined wage and benefit income over the five-year period. In six of them, the increase in wages earned was less than the decrease in benefits. Averaged across all 10 experiments, participants subject to work requirements experienced about a 1 percent reduction in total income. (For more details, see my discussion of the NEWWS experiments in the Milken Institute Review.)

The NEWWS experiments were conducted more than 20 years ago, but they are consistent with results of more recent policy initiatives. For example, Kansas (2013) and Maine (2014) cut off SNAP (food stamp) benefits to able-bodied adults without dependents who were jobless for more than three months. According to an analysis of state data by the Center for Budget and Policy Priorities, over the year following the cutoff, earnings of former SNAP recipients increased, but the increase in earnings was largely offset by the loss of benefits in Maine, and probably entirely offset by loss of benefits in Kansas.

In short, work requirements are not very effective in moving people from welfare into the labor force. To the extent that these requirements do anything, taxpayers capture most of the gains, while former beneficiaries often fail to earn enough to compensate for the loss of benefits. Although modestly successful in cutting welfare rolls, work requirements by and large fail to move people out of poverty.

What accounts for these disappointing results?

The pool of work-ready welfare recipients is small

One reason work requirements fail to move more people into the labor force is the small size of the pool of people on public assistance who are truly available to work. That is because many beneficiaries already work, and most of the rest face a variety of economic and noneconomic barriers to employment. That was true of those who participated in the NEWWS experiments, and it is true today of most people who are on Medicaid.

The following chart from the Kaiser Family Foundation gives us an idea of the numbers. The chart shows that among nonelderly adult Medicaid beneficiaries who were not enrolled in the government’s Supplemental Social Insurance (SSI) program for the disabled, 60 percent  worked at least part time. A separate KFF study notes that a total of 79 percent lived in a household where at least one member had a job. Yet another KFF report shows that the majority of Medicaid enrollees in the states that are currently seeking to impose work requirements are currently working.

Of the enrollees who are not working for pay, 12 percent are serving as caregivers to children or other family members. Their unpaid work has economic value that is likely, in most cases, to exceed what they could earn in the kind of low-paid jobs in which working Medicaid recipients are typically employed.

Another 14 percent are not working because of illness or disability. Note that not being enrolled in SSI disability does not automatically mean that a person is medically able to work. Some suffer from temporary illnesses that do not qualify them for SSI. Others may be disabled, but have not completed the arduous process of applying for SSI benefits.

A further 6 percent of Medicaid recipients were not working because they were in school. Being in school does not absolutely preclude work, but scheduling constraints can make it more difficult for students to find suitable jobs. Also, beyond a point, working may reduce school performance, to the detriment of long-term employment prospects.

Finally, of the 7 percent of Medicaid recipients who are not working, caregiving, disabled, ill, or in school, many face other serious barriers to finding employment. Those include lack of transportation, mental health problems that fall short of full disability, emotional issues, criminal records, substance abuse, domestic abuse and low skills.

In short, despite what some who support work requirements seem to think, there are no large numbers of people who could work, but who choose not to because life on public assistance is easier and more comfortable.

Adding a stick is not enough

Conflicting incentives are a second reason that work requirements produce disappointing results. Work incentives can take the form either of a carrot or a stick. The carrot is the hope that getting a job will raise your disposable income and allow you to live better. Adding a stick — a threat that something bad will happen if you don’t work — seems like it should make the incentive even stronger. But the stick by itself may not be enough if the carrot isn’t there, too.

To see how carrots and sticks can work at cross purposes, look at the structure of our existing social programs. Most of them reduce benefits as income increases. When you participate in more than one program, the benefit reductions add up, layer on layer.

In some cases, especially for people close to or just above the poverty line and for secondary workers in poor households, effective marginal tax rates can exceed 100 percent. If you add in costs of work clothes, transportation and child care, taking a job can actually cost you money.

Medicaid is a special case. Rather than being subject to a gradual reduction as earnings rise, Medicaid is tied to a fixed income limit. The limit varies according to the state you live in, your age, and whether you have children. For a family of four in the 32 states that have expanded Medicaid under the Affordable Care Act, the limit is currently about $34,000 a year. If you earn less, you get Medicaid at no cost. If you earn $1 more than the limit, you lose it altogether. Elsewhere, income limits are even lower. In 12 states, even if you have dependent children, you can lose Medicaid if you earn as little as $200 a week.

How much of a barrier to work that constitutes depends on your circumstances. If you have skills or education, you can get a job with an employer that pays you a good wage plus health care benefits, but in that case, why would you be on Medicaid in the first place? If, instead, you have skills that qualify you only for a low-paid job — the kind that usually has no health benefits — and if you or anyone in your family has ongoing health problems, you have to walk a fine line. Adding a work requirement to the income limit for Medicaid would only make your life more difficult. If you had to work at least 20 hours a week to keep your Medicaid, as you will now be required to do in Kentucky, but also had to earn less than $200 a week, you’d have to stay away from any full-time job and even from any part-time job that paid much more than the minimum wage.

If not work requirements, then what?

So, if work requirements won’t move people off public assistance and into the job market, would anything? Here are three ideas that have real potential to work better:

First, we need universal health care, in a form that ensures full access to the system for people with low incomes. That could be something like Bernie Sanders’ Medicare for All. Instead, it could be another approach that I like, a form of universal catastrophic coverage that would give full health care coverage to low-income families and high-deductible coverage to those who could afford to pay for their own routine health expenses. Or we could just copy the system they have in Switzerland or New Zealand or Singapore or somewhere else where we like the results. Whatever form it might take, universal health care access would address two of the biggest barriers to work for people with low incomes: Poor health itself, and the disincentive effects of Medicaid income limits.

Second, we should fundamentally reform our social safety net in a way that eases cascading benefit reductions and high effective marginal tax rates. The ultimate solution would be to replace all existing income support programs with a universal basic income. An older idea that would represent a partial step in the same direction would be something like Milton Friedman’s negative income tax, which would replace multiple cash and in-kind programs with a single cash payment, subject to a more moderate marginal tax rate. Still another proposal is an enhanced earned-income tax credit or wage subsidy.

Finally, we need to make greater efforts to overcome the employment barriers that affect so many people with low incomes. We could start by making better use of conventional active labor-market measures like retraining and job centers that match people with jobs. Better transportation and child care options would let a lot of people take jobs that they already qualify for, but can’t now accept. We need better treatment options for those who abuse opioids and other substances, a problem that work requirements for Medicaid would arguably make worse, not better. We could improve labor market fluidity by getting control of runaway occupational licensing and easing employment barriers for ex-offenders. The list goes on and on.

There are no magic bullets here, but each item would help. And keep in mind — work requirements are not a magic bullet, either. They are more like firing a blank.