Dangerous Donald and the Doomsday Clock: Trump's derangement could yet kill us all

Trump passed a cognitive test. Why are we not reassured, and why did that clock click a little closer to the end? 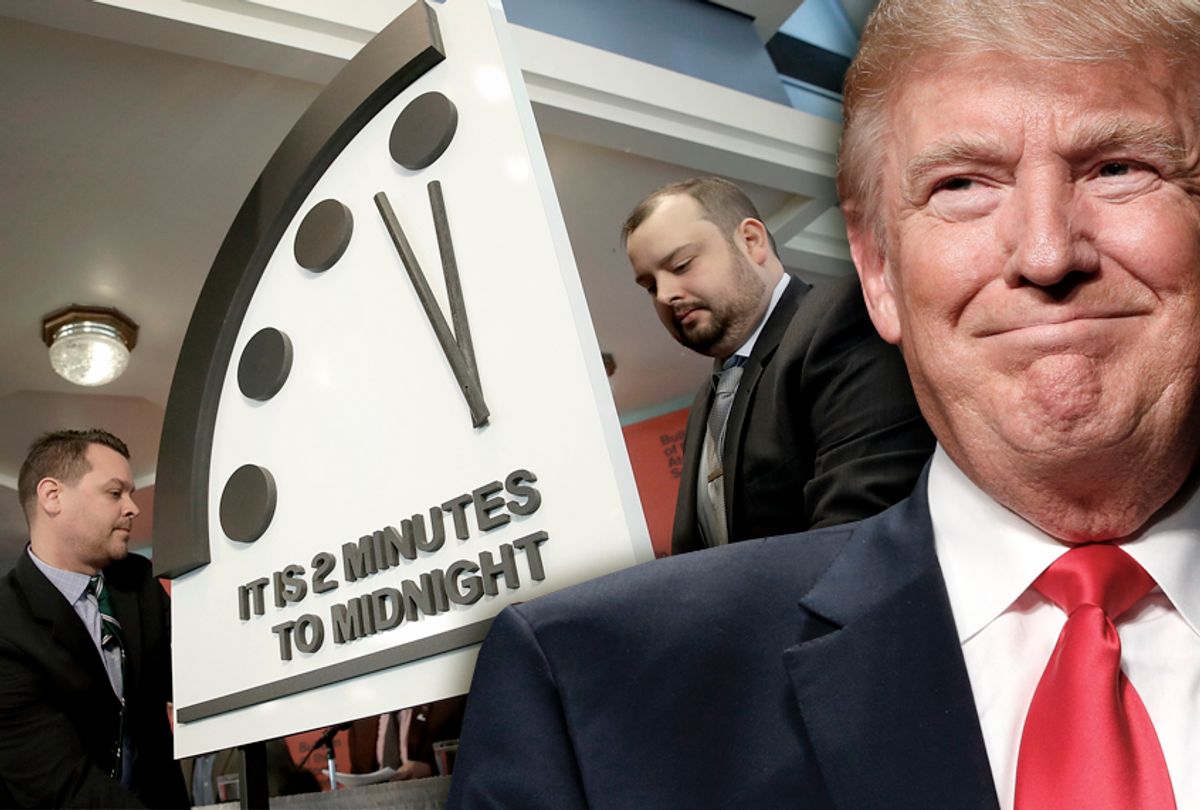 When President Donald Trump declared on Twitter earlier this month that he was a “very stable genius,” and that his greatest assets throughout his life have been “mental stability and being, like, really smart,” the immediate response from most people was to question the president’s mental stability and intelligence. If Trump was in fact a genius, critics agreed, it seems unlikely that he would announce it to the world on Twitter, nor would he impulsively tweet his muddled thoughts at 3 in the morning if he were a stable human being.

A few weeks later, it appears that the president’s claim still hasn’t convinced most Americans. If anything it has done the opposite: A recent poll from ABC News and the Washington Post found that nearly half of Americans now believe that President Trump is not mentally stable, while 73 percent say that he is not a genius (compared to 21 percent who say he is). This survey was conducted shortly after President Trump took — and passed — a cognitive test to screen for disorders like Alzheimer’s disease and dementia, after some critics had speculated that the 71-year-old man was experiencing symptoms of mental decline. (This speculation was based mostly on Trump’s limited vocabulary, which has diminished perceptibly over the years.) Like Trump’s pronouncements of perfect mental health, however, this test has done little to quell public concern over the president’s state of mind.

Of course, the president hasn’t done himself any favors when it comes to shaping the public’s perception of him. It is almost impossible not to conclude that he suffers from some kind of mental illness or personality disorder based on his erratic and impulsive behavior. As clinical psychiatrist John D. Gartner writes in “The Dangerous Case of Donald Trump,” which consists of essays from 27 mental health experts, “If you take Donald Trump’s words literally, you would have to conclude that he is psychotic.” The question is whether to take Trump’s words literally, and on this point Gartner is not so sure. “Is it all for effect,” he wonders, “to rile up his base, deflect blame, and distract from his shortcomings, or does Trump actually believe the crazy things he says?”

This has been one of the main questions regarding Trump since he announced his candidacy almost three years ago, and for a long time it has remained unclear whether Trump is playing a character on TV (he is, after all, an entertainer) or just being himself. After he was elected, many had hoped that Trump would become more “presidential” (i.e., less insane) once in office, but one year into his presidency he remains as unhinged and unpredictable as he was on the campaign trail.

Considering that the president’s behavior has contributed to his historically low approval rating, it seems doubtful that he would continue to behave the way he does if it was all just an act. One is forced to conclude, then, that the Donald Trump who peddles fake news and conspiracy theories and goes on incoherent Twitter rants is the real Donald Trump, and that he actually believes the crazy things he says.

Though Gartner and the 26 other contributors to “The Dangerous Case of Donald Trump,” which was edited by Yale psychiatrist Bandy X. Lee and published last October, offer different perspectives on Trump and his mental health, they unanimously agree that the he poses a great danger to the world as president of the United States. “The issue we are raising is not whether Trump is mentally ill,” writes James Gilligan, clinical professor of psychiatry and adjunct professor of law at New York University. “It is whether he is dangerous. Dangerousness is not a psychiatric diagnosis. One does not have to be ‘mentally ill,’ as both law and psychiatry define it, in order to be dangerous.”

Clinical psychologist Craig Malkin similarly writes that “When it comes to the question of whether or not someone who’s mentally ill can function, danger is the key — to self or others. This is where pathological narcissism and politics can indeed become a toxic, even lethal mix. When peace at home and abroad are at stake — not just the feelings of coworkers, friends , or partners — pathological narcissism unchecked could lead to World War III.”

Whether or not President Trump suffers from malignant narcissism (described by Erich Fromm as “the most severe pathology and the root of the most vicious destructiveness and inhumanity”), hypomania, bipolar disorder, delusional disorder, anti-social personality disorder or any other kind of mental illness, it is clear that this president is neither sane nor stable, and he is growing worse by the day. “Trump is bad, mad, and getting worse,” concludes Gartner. “He evinces the most destructive and dangerous collection of psychiatric symptoms possible for a leader.”

In an interview with Politico Magazine earlier this month, Lee, who has received thousands of death threats since speaking out publicly about Trump’s mental health, remarked that “Trump is going to get worse and will become uncontainable with the pressures of the presidency.” One shudders to think how much worse Trump can actually get — and how much damage he can inflict on the world in the process.

On Thursday, the Bulletin of the Atomic Scientists moved the hands of the notorious “Doomsday Clock” closer to midnight. At two minutes to 12, the clock is now the closest it's been since 1953, at the height of the Cold War. In a statement by the editors, they note that “hyperbolic rhetoric and provocative actions by both sides have increased the possibility of nuclear war by accident or miscalculation.” The inflammatory rhetoric and mercurial behavior of President Trump is particularly worrying:

Neither allies nor adversaries have been able to reliably predict US actions — or understand when US pronouncements are real, and when they are mere rhetoric. International diplomacy has been reduced to name-calling, giving it a surrealistic sense of unreality that makes the world security situation ever more threatening.

“This is a dangerous time,” the editors conclude, “but the danger is of our own making.” Unfortunately, the danger is unlikely to subside as long as Dangerous Donald has the nuclear codes.