Trump, Mueller and the "rule of law": Defending an ideal we don't understand

Mueller's independence represents a core American principle. But hasn't the rule of law always been about power? 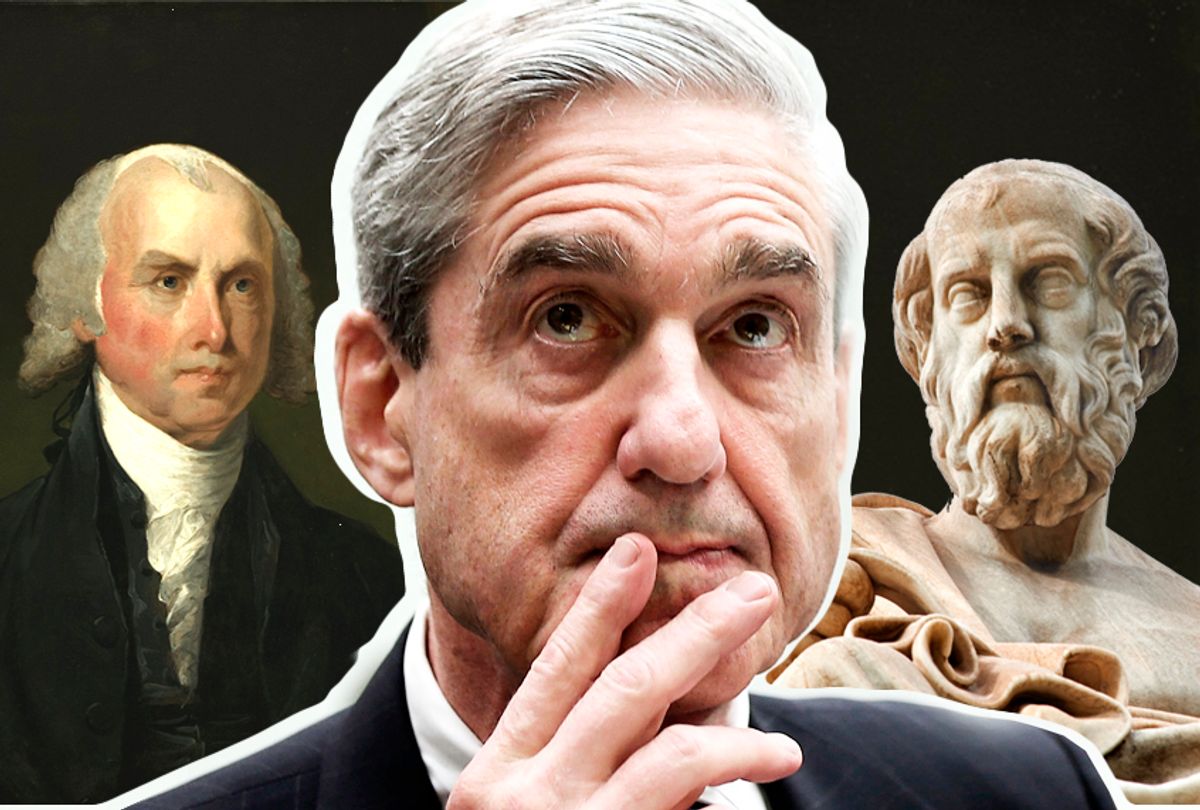 Amid the cascading, metastasizing disaster of Donald Trump’s presidency, it can feel reassuring to grab hold of whatever coherent institutions or conceptions we can find: the Democratic Party, the midterm elections, the Russia investigation, Robert Mueller, the FBI, the norms of democracy, the rule of law. But Trump is like the court jester who accidentally became king: He is clearly dangerous, but he has done us a perverse service by revealing that none of those things is quite as solid or coherent as it appears to be.

Many of the contradictions of this historical moment are bound up in the notion of the “rule of law,” a poorly defined principle that plays a central role in our national discourse at the moment. Almost everyone in American society claims to believe in the rule of law, but in roughly the same way most American Protestants believe in God: as a convenient fiction hauled out to support a preexisting agenda. It’s not at all clear that Americans still possess any shared ideal of what the law is or how it works. If we did, Merrick Garland would be on the Supreme Court right now. It seems ludicrous to claim that anyone, of any party or any ideology, actually sees the law as a neutral or abstract force rather than a naked instrument of power.

President Trump’s reported attempt to fire Mueller last June — or to fire as many Justice Department officials as necessary, Richard Nixon-style, to shut down the Russia investigation — presented an obvious challenge to the rule of law. Indeed, Trump’s entire presidency has been devoted to placing himself above the law, or rather against the law, and depicting it as a vindictive and illegitimate force wielded by his political enemies. Whether you want to call that a conspiracy to obstruct justice or making America great again, it’s far more consequential (and more destabilizing) than whatever did or didn’t happen between his 2016 campaign and the Russians.

Nothing has traditionally been more central to Americans’ quasi-religious understanding of their democracy than the importance of the rule of law, which can be broadly defined as the notion that laws should govern people rather than the other way around. (Spoiler alert: There’s an enormous paradox baked into that from the beginning, since it’s always people with power who make the laws in the first place.) That was essentially the basis for the constitutional separation of powers laid out by Thomas Jefferson and James Madison, which was meant to ensure that the law itself would remain independent of those who enacted it, enforced it or interpreted it.

This ideal retains considerable symbolic potency, even in a Trumpified America so bitterly divided that we no longer seem to inhabit the same country or perceive the same reality. Consider the case of White House counsel Don McGahn, a staunch Republican and longtime Trump ally who (as he would happily agree) is nobody’s idea of a liberal hero. Yet it appears that McGahn defied Trump on the Mueller firing, telling the president he would resign himself rather than carry out a widespread purge at the Justice Department.

No doubt that was mostly about survival and self-preservation — McGahn would prefer to have a law license and a clear criminal record when this is all over, I imagine — but in fact those things largely depended on avoiding the appearance of undermining the rule of law. McGahn understood, as did many other toadying Republicans who have gone along with every other aspect of Trump’s noxious agenda, that if the president blunders into a constitutional crisis by asserting imperial powers and claiming that the other branches of government can’t constrain him, the party is literally over.

It’s tempting to game out all the exciting stuff that might happen after that: the fiery implosion of the Republican Party, into pro-Trump and anti-Trump factions? A 25th Amendment coup-d’état, placing Mike Pence on the throne? Some clownish but horrifying attempt at an actual fascist seizure of power? A lot of pointless, angry venting on social media? (That one, definitely.) But the most important thing to notice here is that Republicans have been about 97.5 percent fine with the hateful rhetoric, overt racism, endless lying and deranged conspiracy-mongering of the Trump regime. Where were Don McGahn’s so-called principles on all that stuff? But give the impression of attacking the sacrosanct “rule of law” and, horrors, we can’t have that. WTF?

For many liberals and at least some conservatives, who may sharply disagree about how much Trump they are willing to tolerate, the rule of law now functions as a kind of totem. If we still honor that totem — even in a watered-down, pro forma McGahn sense — then we still have a democracy that may yet again function normally after Trump’s departure. (As I've complained many times, this seems to involve the Republicrat fanfic that it was functioning normally up until November 2016.) Robert Mueller, if you like, becomes a totem for the totem, the human embodiment of that possibility. He was certainly sent for the part from central casting, to use a Trumpian phrase: a decorated war veteran of unquestioned personal rectitude, a lifelong Republican whose disinterested pursuit of truth and justice could (at least hypothetically) bring down a Republican president.

But what do we mean by the rule of law, and for that matter what do we mean by democracy? Nothing about those terms is transparent. In its Jefferson-Madison formulation the rule of law is a central pillar of the Enlightenment invention that came to be called “liberal democracy,” a contested political zone based first and foremost on private property rights, a market economy and a broad conception of individual liberty. Indeed, those things are interdependent: That kind of society produces that vision of the law as a neutral, independent and almost mystical force that stands outside the control of any person or any party — and that vision of the law reproduces that kind of society.

That isn’t some Marxist or postmodern interpretation of the nature of liberal democracy, by the way. The source there would be John Locke, who in the late 17th century forcefully rejected what we might call Plato’s “stable genius” theory of leadership, which held that we were better off relying on people with intelligence, insight and expertise than mindlessly following rules. Locke argued that “established standing Laws, promulgated and known to the People” were a superior basis for government than the “extemporary Arbitrary Decrees” of tyrants. As the Stanford Encyclopedia of Philosophy explains this, Locke was worried about a state of affairs where “the ruler just figures it out as he goes along,” and the public welfare is subject to his “sudden thoughts, or unrestrain’d, and till that moment unknown Wills.”

That sounds a lot like the Twitter stream of someone we know, am I right? But Locke also made the curious claim that protecting private property rights was a “substantive principle” of the rule of law, and therefore any law that violated those rights was not valid. Reams of scholarship have been devoted to Locke’s theory of property, which appears to view a highly unequal division of land, material and resources as a "natural" law, handed down by God or from time immemorial, rather than a social fact created by human power relations. But in any case America’s founding fathers inherited this strange ideological seed and planted it at the heart of our republic, where it flowered into enormous contradictions. Slavery and the subordinate status of women were matters of indifference, to be worked out along with the interstate commerce laws. But a dude’s stuff? That was sacred.

Maybe Don McGahn had to pull Trump back from the abyss in order to protect his vacation house and his Lamborghini, or more properly the unequal economic conditions that have created and empowered the donor caste of both parties. In a world where liberals have suddenly become big fans of the FBI -- a secret police force that has spied upon and persecuted left-wing dissidents throughout its entire history -- anything seems possible. Trump’s all-out war against the rule of law, and his evident contempt for the tenets of democracy, have laid bare our entire society’s deep confusion about those things. Furthermore, large numbers of people outside the political mainstream, on both the extreme right and the radical left, share those views, even if they don’t agree with him about anything else.

Trump’s cynical and adversarial view of the courts and the justice system — in pursuit of repugnant goals, to be sure — has widespread resonance across the political spectrum. It carries startling (if inadvertent) echoes of Nietzsche and Foucault, and reverse-mirrors the views of Harvard legal scholar Morton Horwitz, who has argued that the rule of law creates its own ruling elite of “the shrewd, the calculating, and the wealthy,” who then manipulate the system to their own advantage. Much of the anxiety of the Trumpian moment stems from the fact that even those of us who continue to honor the totems suspect they are hollow. What rule of law do we have now? What form of democracy? Robert Mueller, a nation turns its lonely eyes to you.