The 16 Best Picture winners that never, ever should have gotten an Oscar

The idea of a "best" film is bad. That these films were honored as such is even worse. 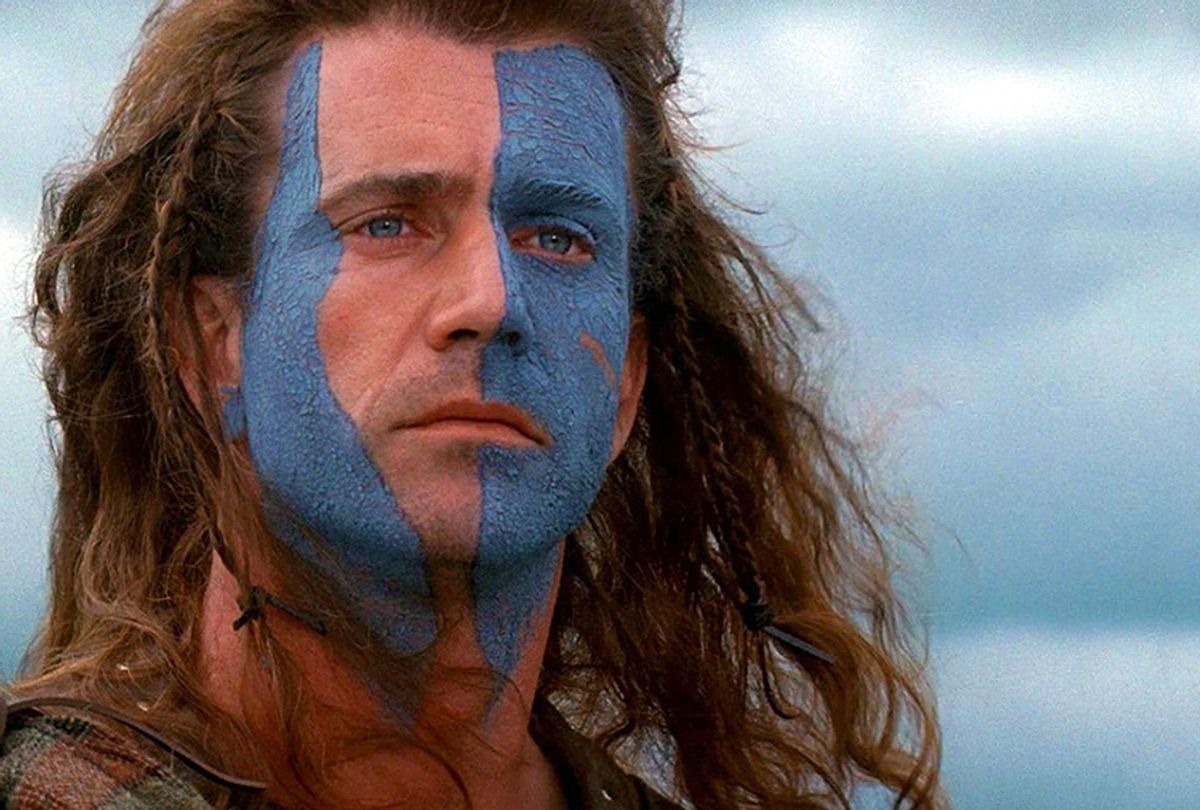 Quite often, this worthiness is determined not so much by the technical or artistic merits of a performance or work, but through a complex matrix of concerns native only to Hollywood: whether an actor is liked by his or her peers; whether a director is sufficiently deferential to the glory that is the industry; whether a film strives for quality without doing so in a way that makes other films look bad; whether its producers throw good parties; whether it's winsomely British. Honestly, it's a wonder that the Academy manages to honor actual excellence as often as it does.

The following list of "Best Picture" winners is proof-positive that, when it attempts to represent what is greatest about film, the Academy sometimes renders the Oscars an unfortunately hollow honor.

"Braveheart," 1995
Look, we all can, and probably should, engage in principled arguments over whether, say, "The Sound of Music" really should have beaten "Doctor Zhivago" in 1965, or whether "Rain Man" was actually better than "Dangerous Liaisons" in 1988. Batting around questions of taste and quality is a good thing. Awarding the kind of uneven, ahistorical, self-aggrandizing dreck that is Mel Gibson's "Braveheart" is not.

A fun and often beautiful film to watch, "Braveheart" remains a shining example of prestige laziness with leaden dialogue, hackneyed plot devices and villains and heroes that are barely two-dimensional. Did anyone actually believe that the audibly American, 38-year-old Gibson was an early-20s Scottish farmer? It's a film inspirational in the same way that a 30 pack of Coors Light is.

On top of all that, it may be the worst example of history on film. "Braveheart" was the nickname of secondary character Robert the Bruce, not Gibson's William Wallace. As well, he stages the Battle of Stirling Bridge without the bridge it happened on, makes Wallace the progenitor of English kings and has men who never wore a kilt hopping around in plaid skirts. One could go on for pages. It's a shame that the tight, accurate, engaging "Apollo 13" was passed over for this overblown tribute to Gibson's messiah complex.

"Kramer vs. Kramer," 1979
Robert Benton's often humane divorce drama is, unlike "Braveheart," a genuinely good, well-considered film with wonderful performances (if a dated take on sexual dynamics). Quality isn't the reason it shouldn't have won the Best Picture award that year. Rather, it falls into the trap so many winners in this category do: It got in the way of a far more important film.

Francis Ford Coppola's "Apocalypse Now" was also in contention that year, and it's hard to argue that the film that would become the definitive American Vietnam War movie is less of a cinematic achievement than "Kramer vs. Kramer." An astonishing visual and technical marvel, "Apocalypse Now" is both mythic and realistic, allegorical and grounded — a masterwork.

While bloated, divisive and uneven to some, it represents the best of what is possible within the Hollywood system. That the Academy was unable to see through its oddness, slow pacing and then-controversial journey into the American heart of darkness shows the voters lacked a certain historical vision that year, something that's happened many times.

"The Artist," 2011
The 2011 victory of Michel Hazanavicius' black-and-white, mostly silent tribute to the glories of Hollywood's early days is another example of ways in which Best Picture picks can fall flat for reasons that have little to do with the winning picks themselves.

All in all, "The Artist" can be a fine, enjoyable watch, a bonbon wrapped up in a somewhat interesting conceit featuring a few lovably campy performances and one very talented dog. It can also be downright interminable. You may have watched it once, but would you again? Are people still talking about "The Artist"? No and no.

More than anything else, "The Artist" won because it was about moviemaking — Hollywood has a self-serving tendency to overvalue films about filmmakers — and because there was really nothing outstanding to honor besides it. With "The Artist," "The Descendants," "Moneyball," "Tree of Life" and a handful of other just-fine films in contention, it wasn't an inspiring field in 2011. The fact that every creative award must honor excellence every year, even when there isn't excellence to be found, speaks to the hollowness of having them in the first place.

"Dances With Wolves," 1990
An exquisite tone poem about just how awesome Kevin Costner looks staring out over the tall grass of the plains while the sun sets on his handlebar mustache, "Dances With Wolves" is a soft-spoken visual stunner with a dumb, dumb heart that helped revive the white-savior trope for a new generation of filmmakers. Thanks for picking this over "Goodfellas," meatheads!

"The Greatest Show on Earth," 1952
Charlton Heston as a gruff but understanding circus ringleader? Jimmy Stewart as an enigmatic clown? You've got to be kidding. Well received as high-flying entertainment on release — it did feature the real Ringling Bros. and Barnum & Bailey's Circus troupe, elephants included, after all — time has revealed it for what it is: colorful and dizzying, but overly complex, maudlin and empty. It beat out Fred Zinnemann's brilliant, enduring "High Noon" to add insult to injury.

"Gladiator," 2000
The great, irascible critic Pauline Kael said of Russell Crowe's Best Actor-winning performance in Ridley Scott's throughly enjoyable sandals-and-sweat Best Picture-winner "It’s absurd casting that actor as a gladiator. You look at him flexing his muscles and you want to laugh. He’s like one of the Three Stooges." She wasn't wrong. In retrospect, "Gladiator" appears heavy with false, unearned gravitas and performances unconsciously and dangerously close to camp. "Crouching Tiger, Hidden Dragon" and "Traffic" lost out to Scott's compromised serving of bread and circuses.

"Argo," 2o12
A couple of things went sideways here. For one, "Argo" is a good — not great — potboiler of a historical film given extra weight in the industry not necessarily by its emotional or visual strengths, but by its Hollywood-adjacent narrative and its general amiability. It's not remarkable. Secondly, now Ben Affleck gets to walk around as the Oscar-winning director of an Oscar-Winning film. The world didn't need that.

"How Green Was My Valley," 1941
There is nothing wrong with John Ford's wide-angle, human-scale portrait of the working poor in 19th-century Wales. Far from it. While a bit dated, it's a good example of social justice on film. But, goddammit, it beat out "Citizen Kane." For real, "Citizen Kane." Orson Wells' masterwork was radioactive given that it was (despite denials) a biting indictment of media titan William Hearst. With almost every member of the Academy dependent on Hearst for good press, the voters steered clear of what many call the greatest American film ever made. So much for putting best first.

"Shakespeare in Love," 1998
For a victory that was criticized in its own time, this one used a hat trick of Academy obsessions to win: It was a quirky British period piece, it was about show business and it reeked of that odd, winsome Oscar-worthy perfume Harvey Weinstein sprayed on so many of his projects. So intoxicating was this mix that members forgot that "Saving Private Ryan" was even nominated as they rushed to vote for this fine, but far from great, film.

"Ordinary People," 1980
In another case of the Academy losing its guts, it awarded this serviceable and often sharp chamber piece ahead of two arresting, innovative films, one of which would become a classic. "Ordinary People" has its upsides, but it's a weepy, overwrought wet noodle compared to "The Elephant Man" and the fiery, uncompromising "Raging Bull," both of which were in contention that year.

"The King's Speech," 2010
Upbeat and charming, "The King's Speech" was a humble film that seems to have squeaked in more because of that ineffable Oscar-worthy luster American eyes see in quirky, British period pieces of historical import. Well made, yes. But the "best" picture made that year? Come on. It may have been the least important, the least innovative of the nine films nominated in 2010 ("The Fighter" being the very formulaic exception).

"Oliver!," 1968
Carol Reed's musical interpretation of the Dickens novel has not stood the test of time. It's dirty, creaky and simply not all that fun to watch for modern eyes. Franco Zeffirelli's aching "Romeo and Juliet," which it beat out, remains a keeper, however, and Anthony Harvey's staging of James Goldman's tart, brilliant script for "The Lion in Winter" only improves with age. Sometimes, the Academy members think like a bunch of 8-year-olds. Truly.

"Crash," 2005
A classic in the category, this L.A.-based, inch-deep bunk rumination on race relations in America was such an unexpected winner over the vital, beautiful "Brokeback Mountain" that even Jack Nicholson couldn't hide his deflated bewilderment when he announced its victory.

Just watch.
"Craaasssh ¯\_(ツ)_/¯"
Even writer and director Paul Haggis said he wouldn't have voted for his own film. And, yet, here we are with a winner that is now famous for breaking the trust millions of viewers put into the Academy, trust they never should have given it in the first place.

"The English Patient," 1996
Yet another tony prestige creation of Weinstein's Oscar mill, this one has aged rapidly and poorly. Yes, the slice of this overheated pie taken up by Juliette Binoche and Naveen Andrews' love story is a delight, but the rest is overbearingly melodramatic, stuffy, arch and absurd. It's fully unwatchable at points (just try), a shocker given director Anthony Minghella's talent. The other shocker is that it was picked ahead of "Fargo," an almost instant classic that's become one of the most influential American films of the last generation.

"Around the World in 80 Days," 1956
The only, the only reason this could have been deemed the best film in a 12-month span that also saw the arrival of the classic James Dean vehicle "Giant," the beautiful "The King and I" and the iconic "The Ten Commandments" is that it featured dozens upon dozens of cameos from Hollywood stars — the very people voting on the awards. You see how that works?

"Titanic," 1997
Screw your memories. Screw the young tears you wept when Jack died. Screw Kate Winslet posing in the breeze of a fan on the ship's fake bow. Screw James Horner's treacly Casiotone score. Screw Celine Dion, for that matter. Screw the goofy Leonardo DiCaprio, Billy Zane's wig and "draw me like one of your French girls." Screw James Cameron. Screw that door. This is manipulative, half-baked pablum and you know it — cookie-dough ice cream 100 percent. Enjoy it if you want. Love it if you want. No problems there. But don't try to tell anyone it's the "best." The Academy looks dumb enough on the regular for doing exactly that.