Now the U.S. is playing spoiler role in Korea, Syria and elsewhere. But why?

Washington can't adjust to losing its role as global sheriff, and the entire world must bear the consequences 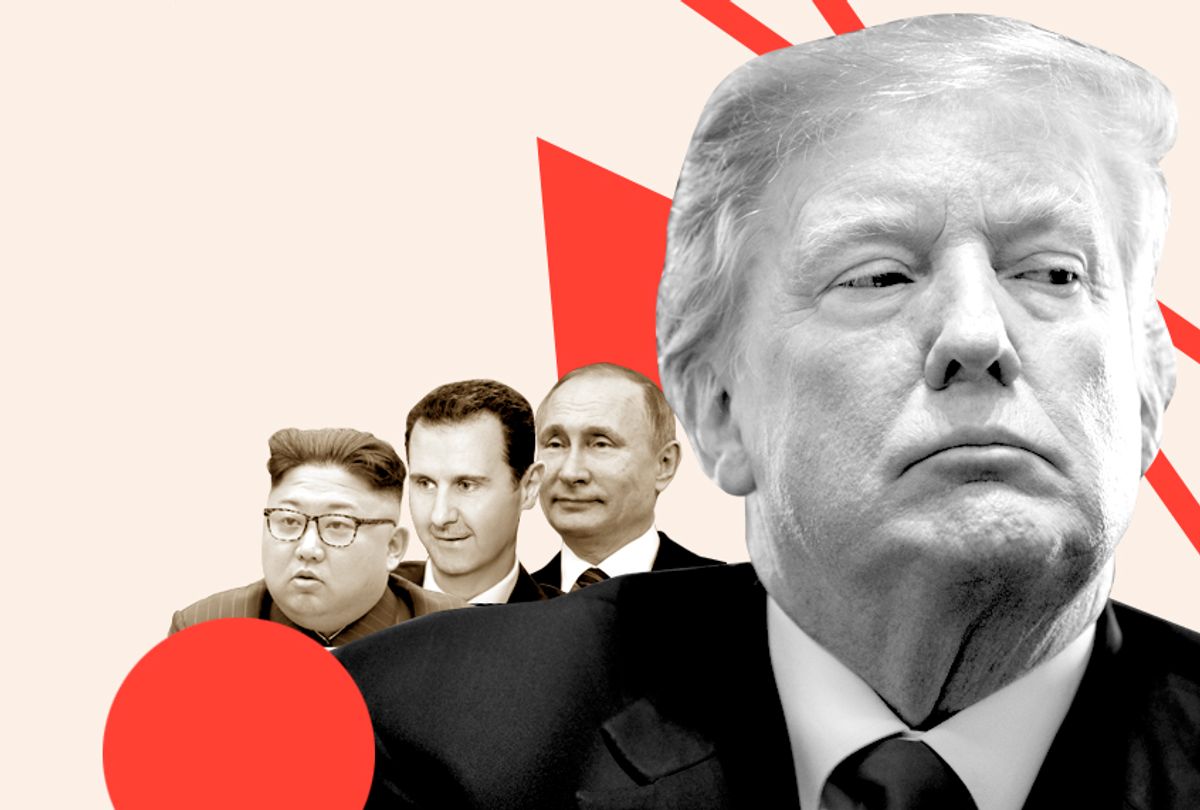 If the first few weeks of 2018 are any guide, it is going to be a tumultuous, confrontational year for America’s foreign relations. Washington’s intentions are likely to reach a state of near nakedness, and so will be a lot easier to discern. To say what we are likely to see is going to be unpretty is to put the point far too mildly.

I termed the United States a “spoiler” in a recent column. By this I mean it appears determined to maintain a state of high tension, if not severe disorder and open conflict or the danger of it, in a variety of global circumstances. Spoil what, you may ask. The answer is almost too bitter to write. Just as sound prospects for negotiated settlements arise in the several cases I will write of here, Washington appears determined to prevent any such successes. This ugly contradiction is already stark and is likely to grow starker.

I could be wrong in my prognosis, but at this moment I see little ground to invest in any such hope. Slightly more plausible is the expectation that the messes our policy cliques create or worsen in the year to come will finally cause more Americans to put our conduct abroad higher on their long lists of objections to our great nation’s direction.

The “spoiler” remark was prompted by the extraordinary events now unfolding on the Korean Peninsula. It is far, far too soon to say “Peace is at hand,” but North and South have taken a couple of small steps on a path to a peaceful settlement as promising as any we have seen in at least a couple of decades. After a brief but worrisome silence, the U.S. appeared perfectly prepared to make sure Seoul and Pyongyang do not get very far. I wrote of this in last week’s column.

Now there is more from Washington in this line — as there has been this past week elsewhere. Let us line up these developments and see what we can surmise when we consider them side by side:

There are three things to note about this round. One, they are unilateral, as are three previous sets. This suggests that the administration may now be isolating itself at the UN by timing new sanctions just as Seoul and Pyongyang begin new contacts the rest of the world wants to see develop. Two, Washington now insists that China and Russia begin expelling various North Korean officials. In my read, the likely objective here is to split Beijing and Moscow from the two other capitals — Seoul and Tokyo — long associated with efforts toward a settlement. Moscow and Beijing, let us not forget, have been actively working with Moon Jae-in’s administration in Seoul to develop workable diplomatic and economic solutions.

Three, and most important, we must ask whether the administration is trying to provoke Kim Jong-un, the North Korean leader, into another missile test, thereby providing an excuse to move militarily. This is quite possible. One hopes South Korean diplomats running contacts with the North are savvy enough to urge their Northern counterparts to maintain calm at all costs and proceed with their new negotiation process.

I do not find this train of developments at all difficult to read, given the admittedly very tentative prospect of a peace settlement either via UN–sponsored talks in Geneva or others backed by Russia, Iran and Turkey. Having failed to dislodge President Bashar al-Assad via a coup, the U.S. now appears intent on dividing the nation from within so as to block Damascus from reasserting control over the country defined by its sovereign borders.

A couple of points to note here. One, the U.S. plan is in gross violation of international law and Syria’s right to territorial integrity under it. Two, I do not know what Washington has told Kurdish leaders or what they are thinking, but the history of America’s betrayals of the Kurdish population is now just short of a century old. I expect this will add another chapter to the story.

Tillerson came out with a real gem in explaining Washington’s de facto occupation strategy. “We cannot allow history to repeat itself in Syria,” he said. This is, of course, precisely what Washington wishes history to do, the objective being to render another Middle Eastern nation so incapacitated — Libya-style, Iraq-style — that there can be no thought of it marshaling a foreign policy of its own.

Last week, we must also note, the inimitable (thank goodness) Nikki Haley came forth with more evidence-free allegations that the Assad government has again deployed chemical weapons in a Damascus suburb. Russia, Trump’s UN representative vigorously asserted, must be held responsible due to the assistance it gave the Syrian Arab Army in defeating the Islamic State. More on this in a moment.

Why this, why now? Well, there has been little movement on the ground, due primarily to Kiev’s refusal to fulfill its responsibilities under the 2015 ceasefire agreement known as Minsk II. But that is not where to look for an explanation. There have been signs that the accord’s other signatories — Germany, France and Russia — intend to mount a new effort to revive Minsk II and require Kiev to abide by its terms, which include greater autonomy for the eastern provinces. That is where to look.

In Syria and Ukraine alike, the common subtext is the state of U.S.–Russian relations. Washington appears intent on locking these, too — indeed, these above all — in a state of indefinite dysfunction. This, in my read, is why Haley, in her leap of illogic, was so quick to jump from Damascus to Moscow when she laid blame for another alleged deployment of chemical weapons in Syria. The Ukraine case requires no further explanation in this connection.

It is almost too disheartening to lay these three crises side by side and consider the U.S. position in each. If I could avoid concluding that spoilage is Washington’s active intent I would leap at the chance to do so. But I see no such alternative.

It remains for now to ask why 2018 has opened so grimly in the foreign policy sphere. I have three explanations to offer.

One, we cannot forget who runs American “foreign policy” now, and I resort to quotation marks because I do not think we have one anymore. We have a military policy managed by active and retired officers. The core axis of the policy process, as I have previously suggested, appears to run from the Pentagon to H.R. McMaster, Trump’s national security adviser. They are the administrative faces of a vast complex of interests, military and industrial, all too familiar to all of us.

Two, contradictions are sharpening. More nations are proving able, willing and influential enough to begin constructing negotiated solutions to global crises whether or not the West, and specifically the U.S., is on board. In the three cases reviewed, these nations are China, Russia, Iran and to a qualified extent Turkey (a highly problematic case). This accounts for the aforementioned nakedness of U.S. policy objectives.

Finally, and related to the above, the “sole superpower” phase of the post–Cold War era is slipping with accumulating momentum into the past. Maintaining unipolarity, to put the point another way, becomes an ever more forlorn endeavor. It cannot hold, and one mourns Washington’s inability to grasp this reality.

The world pays so long as the U.S.-as-spoiler defines our nation’s posture in international affairs. As this grows more evident — easier to see and harder to flinch from — maybe we in whose names policy is conducted can assume the responsibilities we have borne all along but neglected.