His beef with Jay-Z proves who Trump really is

Eminem is saying far worse things about the president, but you don't see him on Trump's Twitter feed — wonder why 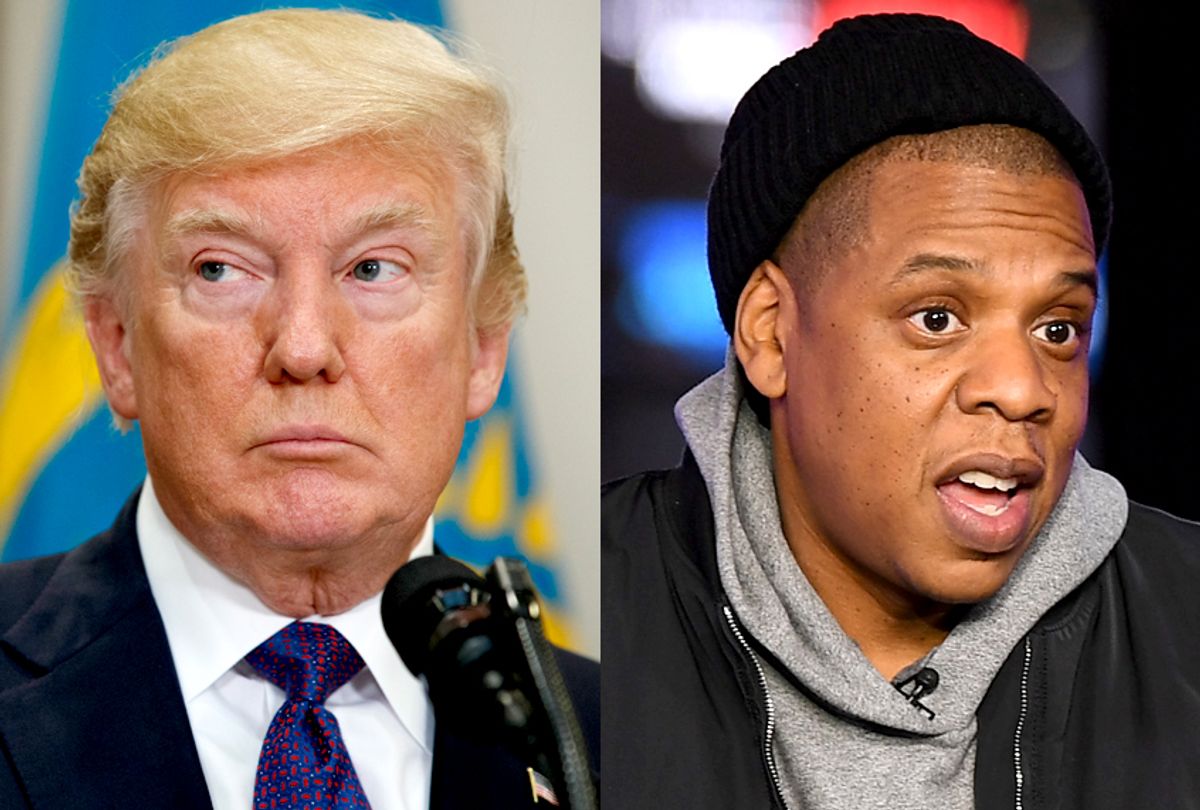 Seems like every week President Donald Trump does something to prove to us that he is nothing other than a racist.

Whether it's calling white supremacists "very fine people" or saying that black-majority countries are "s**t holes" filled with people too unqualified and too dangerous to immigrate to America (unlike those folks from Norway), he keeps proving who he is. Business as usual.

This week’s installment was sparked by rapper Jay-Z’s comments on CNN’s new "The Van Jones Show."

Trump caught wind of these statements and ran straight to his weapon of choice, Twitter. "Somebody please inform Jay-Z that because of my policies, Black Unemployment has just been reported to be at the LOWEST RATE EVER RECORDED!" he wrote.

Yes, African-American unemployment is down, at least according to Politifact. However, when Trump touts that fact, he conveniently ignores the eight years of groundwork that the Obama administration put in after the Bush recession and how he inherited a better economic situation. My issue really isn’t with his response, it’s with the fact that he decided, or needed, to say something.

Trump, who swears he’s not racist, is always so quick to mention or attack any famous black person who critiques his presidency. The president had zero words for the shots fired at him by NBA coaches Steve Kerr and Gregg Popovich, who both called him out, but couldn’t wait to battle with LaVar Ball or Steph Curry for offering different versions of the same critiques.

Then there's his long war with quarterback Colin Kaepernick, who pissed off the president by starting a series of peaceful, harmless protests in which no one was hurt (unlike the "very fine people” Trump referenced in Charlottesville, whose actions lead to the killing of Heather Heyer).

That same imbalance is in play here. Jay-Z offered a little dig on Trump, and The Donald came back at him in less than 24 hours. Eminem has written a whole song and offered constant comments about Trump, dragging the president in any and every negative way possible, and we’ve yet to see him respond.

Eminem is just as famous as Jay-Z and offered a clearly more offensive take on the president. But, of course, Eminem is white, and the only thing Trump loves more than McDonald's burgers is his fight to Unite The White. I wonder what would have been his response if that was Eminem sitting on camera with Van Jones saying something similar. Would he have said anything at all?