Hope on guns? States are starting to take them away from abusers

Despite the NRA's power, legislators in many states are working to disarm men with domestic violence records 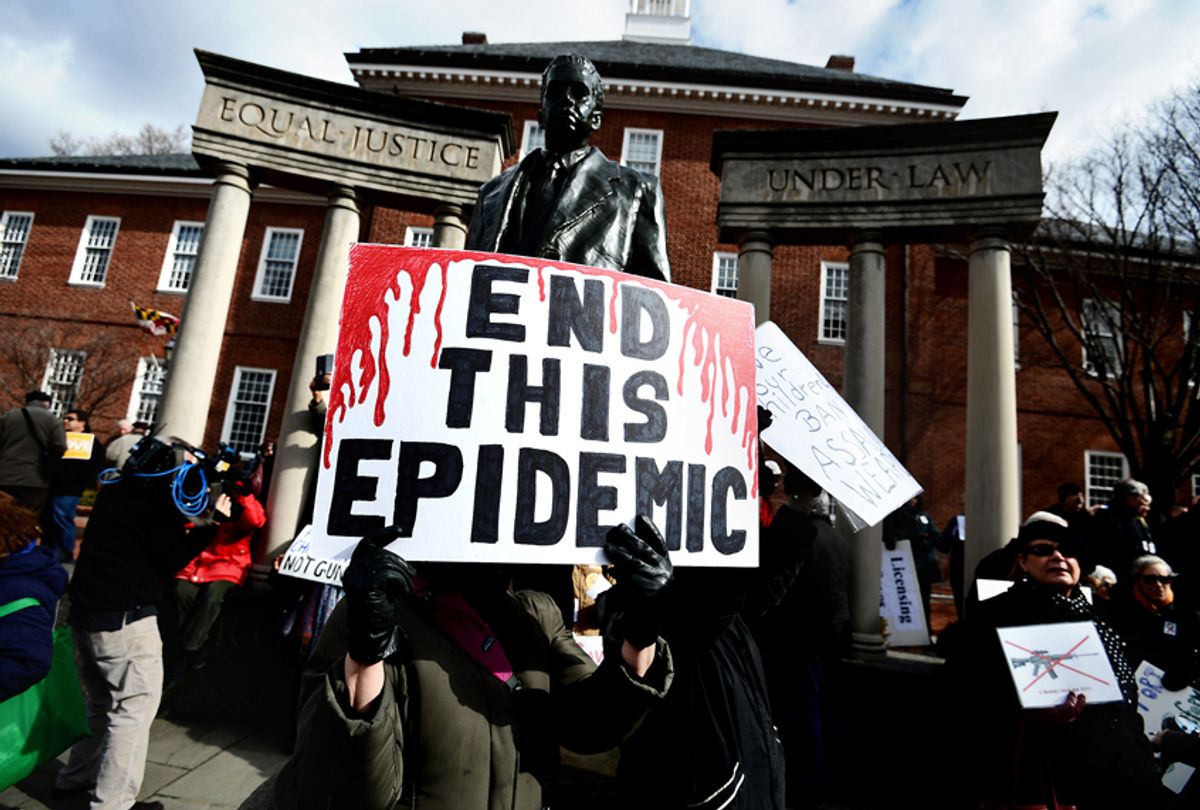 A minor miracle happened on Tuesday in Annapolis, Maryland. About 200 activists with Moms Demand Action for Gun Sense were rallying in the state capital to support the passage of a restriction on gun ownership, and they were met with resistance by counter-protesters from the NRA. At first, things were tense between the two groups, but, in a surprising twist for our hyper-partisan times, the NRA protesters, upon learning what the bill is about — taking guns away from people convicted of domestic abuse — decided to switch sides, throwing their support behind the bill instead.

It was a small sign of something that gun safety advocates have been saying for years: Changing  gun laws is not as impossible as many believe. When it comes to legislation aimed at making it harder for domestic abusers to get their hands on guns, in fact, activists and legislators are quietly securing political victories across the nation.

“Reporters are constantly asking me, 'Do you think Americans are numb?'” Shannon Watts, the founder of Moms Demand Action, told Salon. “That makes it appear that there’s no work being done.

“The domestic gun violence bills that disarm domestic abusers have passed in 25 states and the District of Columbia," Watts added. We’re getting ready to do it in Maryland, maybe Pennsylvania." In five years of existence, her organization has helped secure a remarkable series of victories.

"I’ve been able to heal and overcome and survive by helping others and being a voice," said Giovanna Rodriguez, a Rhode Island activist who helped pass a bill in September in her state that requires those under a protective order to surrender their firearms. She became an activist after escaping a marriage she describes as physically and emotionally abusive.

“What was part of our daily lives was the gun that was the centerpiece on our table," she described. “That’s where he put it as a constant reminder that if things were not done his way, when he wanted how he wanted, that would be the consequence.

"It got to the point where I had to set the table around that weapon,” she added.

A woman in an abusive relationship is five times as likely to be murdered if there's a gun in the home, but as Rodriguez's experience shows, the relationship between domestic violence and firearms extends beyond the risk of death.

“We are increasingly understanding all the different ways that firearms heighten the threat or the coercive nature of domestic violence," explained Sarah Tofte, research director for Everytown for Gun Safety. Research shows that 4.5 million women have been menaced with a gun in an abusive relationship. One million have been shot at or sustained a gunshot wound.

Maryland Delegate Vanessa Atterbeary (a member of that state's legislature), who is working to pass a bill forcing abusers to relinquish their guns in Maryland, noted that the dangers extend past the abuser's own family. She pointed to the recent mass shooting in Texas, in which the shooter "went to the church looking for his ex and shot up the whole church," killing 26 people. Domestic violence is a factor in more than half of mass shootings, in part because, as Atterbeary noted, abusers often go on rampages where their victims might be and then shoot at everyone in sight.

Federal law already prohibits convicted domestic abusers from having guns, but in many states, including Maryland, there's a lack of process to ensure to make sure the abuser relinquishes guns he may have in his home after conviction. So while convicted abusers are barred from purchasing guns, they often still possess those they acquired earlier.

The watchdog organization Court Watch Montgomery recently published a report compiled after monitoring domestic violence hearings for a year in Montgomery County, Maryland (which includes the northwestern suburbs of Washington). It followed 126 cases in which the offender, by law, was supposed to lose his rights to possess or purchase firearms. In only one case was the offender even told by the judge he had to relinquish any guns in his possession.

Atterbeary and a colleague in the state Senate, Will Smith, have been working to pass a bill that, as Smith explained to Salon, would "ensure that [abusers] surrender their guns at the time of conviction." The bill would force the court to inform offenders that they have to turn in their guns, and would also require offenders to provide proof that they've done so.

Versions of this bill have failed in past years, because of political strife over what agencies would be responsible for handling this, but both Atterbeary and Smith expressed optimism that, with bipartisan support and gun safety advocates at their back, they can pass a bill this year.

In New York, state Sen. Brian Kavanagh is sponsoring another bill meant to prevent gun violence broadly, but that specifically has the potential to protect victims in domestic violence situations. It's called an "extreme risk protection" or "red flag" bill, and would allow family members or law enforcement to flag a person who exhibits dangerous behavior and allow a court to temporarily remove any firearms in their possession.

This process is "entirely civil" and "doesn't involve the criminal justice system," Kavanagh told Salon, "but it allows courts to evaluate evidence that somebody’s going through an episode where they might be dangerous to themselves or others.”

Red-flag bills have existed in some states for years, but interest escalated after the 2014 shooting in Isla Vista, California, in which a young man named Elliot Rodger killed six people and injuring 14 others, apparently motivated by misogynistic rage. Rodger's parents had alerted authorities about his erratic behavior before the shooting, but there was no legal way for the police to act on that tip to disarm him.

In response, California passed a law making it easier to get a court order to remove guns from the home of someone who was exhibiting dangerous behavior, and other states are following suit. Kavanagh estimated that legislators in 20 states, some of them dominated by Republicans, are considering similar laws.

The relative newness of red-flag bills means that evidence of their effectiveness is still preliminary, though there's a promising finding that Connecticut's law, passed in 1999, has reduced the suicide rate. Kavanagh suggested that such a law could be "highly effective in a situation where domestic violence was the concern." Victims and other family members of an abuser are often reluctant to involve the criminal justice system, so having a way to remove guns from a situation that does not require calling the police could be attractive. In addition, the bill requires that the order be sealed after a year, which provides privacy that is often very important to victims seeking safety.

"Most people don’t have an idea of the terror that occurs in the daily life of a victim, but it’s far worse when there’s the presence of a gun," Rodriguez told Salon. Real progress is being made, on the state level, to make sure that fewer people have to endure that terror as she did.