Trump Jr., Nikki Haley and Tomi Lahren denounced the Grammys for a skit tied to the Trump exposé "Fire and Fury" 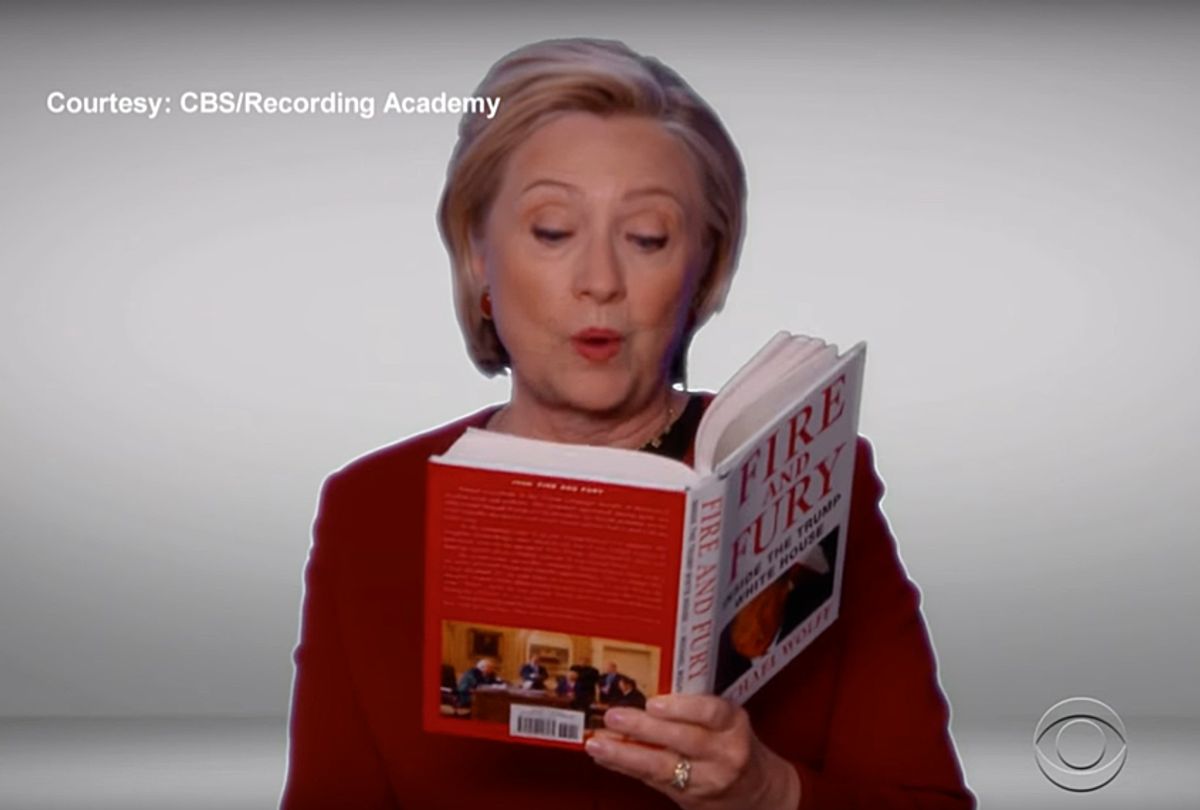 Donald Trump Jr. was not pleased with a skit aired during the broadcast of the 2018 Grammy Awards Sunday night.

In it, Grammys host James Corden held auditions for the audiobook version of Michael Wolff's Trump administration exposé "Fire and Fury." Each offered their own dramatic reading of the book's various revelations about President Donald Trump's dietary habits and bizarre behavior. Rapper Cardi B, Cher, DJ Khaled, Snoop Dogg and John Legend were passed over for the eventual winner, Hillary Clinton. Clinton read a portion of the book that spoke of President Donald Trump's alleged fear of being poisoned, something that reportedly informs his penchant for eating at McDonald's.

The president's son was not amused. "Getting to read a #fakenews book excerpt at the Grammys seems like a great consolation prize for losing the presidency. #GrammyAwards," Trump Jr. tweeted last night, adding, "The more Hillary goes on television the more the American people realize how awesome it is to have @realDonaldTrump in office #GrammyAwards2018."

UN Ambassador Nikki Haley also called out the awards show, claiming the skit "ruined the Grammys." In a separate tweet, she explained that she loves "music without politics thrown into it," meaning she may not have heard a significant proportion of the music produced in 2017.

Fox News pundit Tomi Lahren and other conservatives also weighed in, bashing the Grammys in general for featuring many moments openly critical of the president and his policies and advocating for immigrant rights.

White House spokesman Raj Shah denounced the awards show on "Fox & Friends" Monday morning, saying "When I see Hillary Clinton and other liberal politicians join forces with celebrities or try to show America how in touch they are, I don't take it all that seriously." He added, "You know, the left and the elite centers of America are frankly out of touch with what's going on in this country and all the great work that this president is doing. And I wouldn't take a whole lot of what you see on a Sunday night Grammy appearance by celebrities attacking president all that seriously."

As of this writing, Trump has yet to tweet about the Grammys, and Shah told Fox that he wasn't sure the president watched the show. "But I wouldn't take the words of these celebrities or these liberal politicians all that seriously," he added.

Despite all this, many found the skit absolutely hilarious.

OMG, Hillary Clinton reading "Fire and Fury" on national television. THE SHADE OF IT ALL.#GRAMMYs