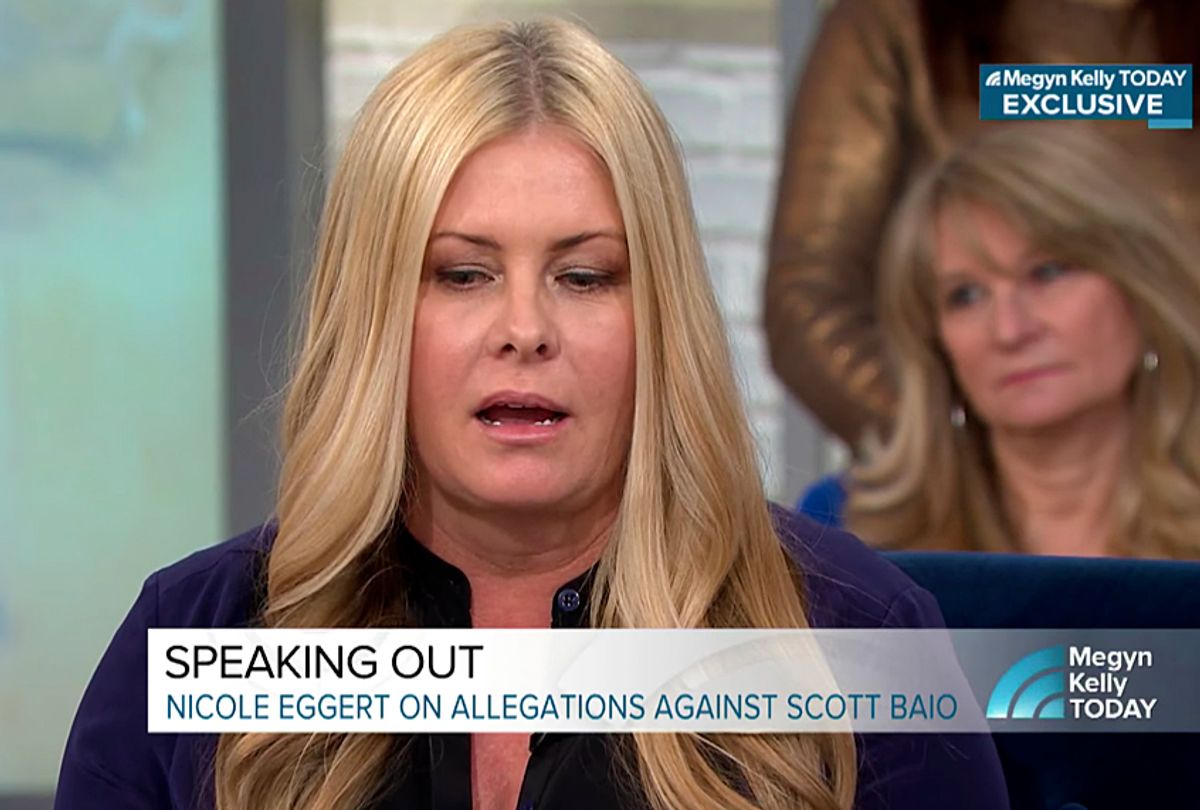 Actor Nicole Eggert, who has accused her former "Charles in Charge" co-star Scott Baio of sexually assaulting her when she was underage, revealed more details of her allegations during a television interview on Tuesday morning.

Speaking on "Megyn Kelly Today," Eggert said Baio began "sexual touching and abuse" on the set of "Charles in Charge" when the show started in 1986 and she was 14-years-old.

"He started expressing his love for me and talking about marriage and the future," Eggert recalled. The actress said the abuse began when "we were at his house in his car in his garage and he reached over and he penetrated me with his finger."

"I was very young and it was shocking, a little," she told Kelly. "He was playing not only with my emotions but my hormones and all of those things."

Eggert says years of reflection and also becoming a mother helped her realize her relationship with Baio was inappropriate.

"What my truth is, is that I wasn't ready to tell my story,'' Eggert told Kelly. "For me it was always protecting the show and protecting that whole legacy that nothing happened there. That was my delusion, and that was my cover-up, always. I always lied about it," Eggert said, defending herself when asked about claims that she had a consensual sexual relationship with Baio and about previous interviews in which she spoke positively of him.

Eggert then pointed out the power imbalance in her relationship with Baio, noting that Baio was her boss, as the star of the show. She also said he told her, "'You can't tell anybody, this is illegal. The show will be over. Everybody will be sued. You'll be out of a job. You'll ruin everybody's life,'" which she found "scary and intimidating" because she was so young.

The actress said she was 17 when Baio and she first had sex, at which time she would have been a legal minor in the state of California where the intercourse allegedly took place. Baio has insisted Eggert was at least 18 years old at the time.

Eggert added that Baio began to treat her differently after they had sex. “He didn’t treat me well on set after it happened. He was quite mean to me,” she explained.

Prior to Eggert's interview with Megyn Kelly, the actress first made allegations against Baio on Twitter over the weekend, posting "Ask Scott Baio what happened in his garage at his house when I was a minor. Creep."

Baio fought back against Eggert's claims in a 15-minute Facebook Live video, in which he says her claims are "100-percent lies." Baio claims the two had a consensual sexual relationship after the show ended, when she was of age. Baio also produced several documents and examples, which he says proves his innocence.

"My reputation is being damaged, my family is being put through this, and I'm done,'' he said. "If you have a real claim, you go to the real people. Not social media, where people like me get beat up."

Speaking with Kelly, Eggert said shame played a significant role in how she viewed her relationship with the actor for several years. She noted that this influenced her 2012 interview with Yahoo, in which she said the two became "really good friends" and that "everything is way more innocent than it was made out to be."

"If I could go back back to a younger Nicole, I would tell her she doesn't have to be ashamed that she's a victim,'' Eggert said. "Shame can play such a weird part and such a strong voice . . . you lie. I didn't want anybody to look at me and think I was weak."

See Eggert's interview in the clips below.