Trump's game of thrones heats up: McCabe, Rosenstein and the "memo"

What State of the Union? Trump's so involved in trying to save himself he may forget he's got a speech to deliver 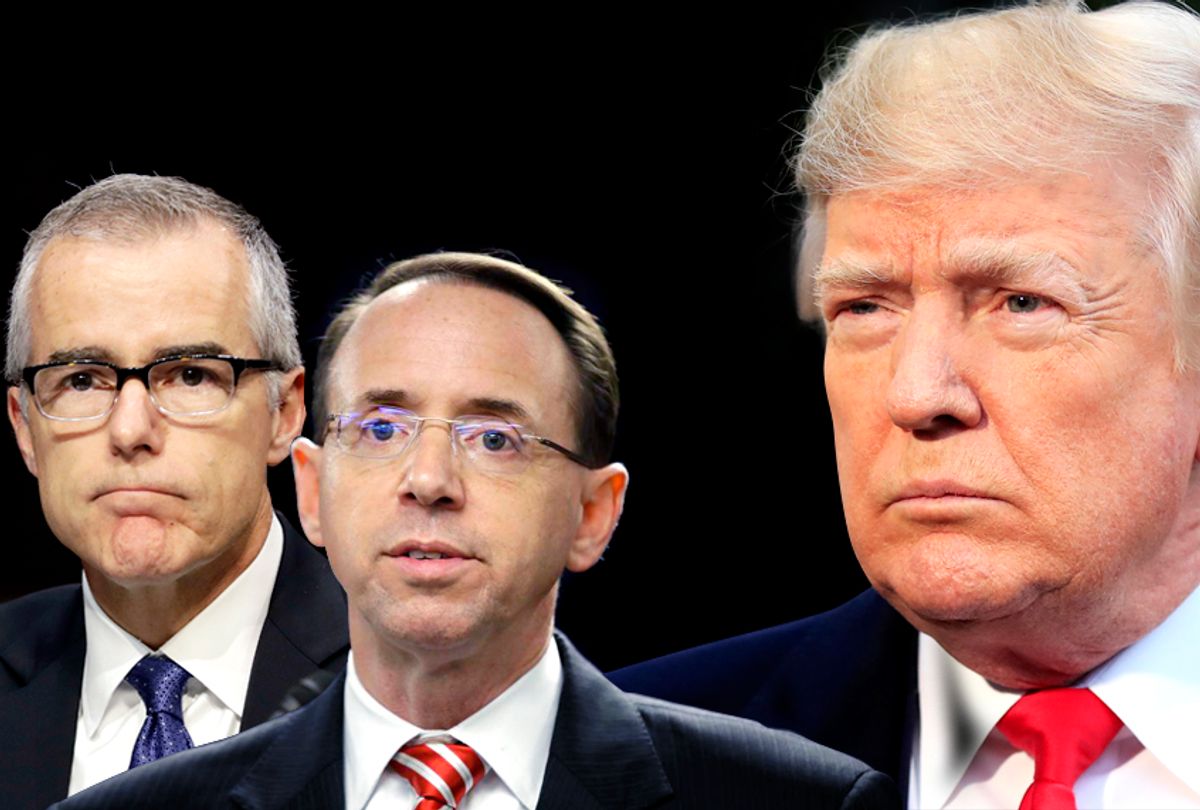 Generally speaking, in the days before a president's annual State of the Union address, the media turn themselves into psychics and fortune tellers, spending hours on end predicting what he's going to say and how the country is going to receive it while ignoring most other news. Once you see a speech "countdown clock" appear in the corner of the TV screen, you can be sure that the commentary will be exceedingly tedious until it runs out.

The White House usually tries to build excitement by leaking tidbits about the speech and the attendees and focusing attention on the president's agenda. Naturally, this White House has opted for chaos instead. Officials have made a tepid effort to claim that President Trump will "pivot" to a big bipartisan pitch, but at this point nobody believes a word he says, so a speech isn't going to get him anywhere. Anyway, the president and the House Republicans couldn't stop inappropriately meddling in the Russia investigation long enough to get through his big day, so the whole exercise was pointless.

As we know, Trump has been fighting the investigation from the beginning, aiming his ire both publicly and privately at top members of the FBI and the Department of Justice. He and his supporters in right-wing media have decided that these career law enforcement and counterintelligence officials eagerly helped Hillary Clinton evade justice for her myriad crimes and then attempted to wreak vengeance on Trump for being the greatest candidate ever and thwarting their nefarious plans by cooking up the bogus Russia scandal to make it look like he hadn't really won the election. This plan included intelligence agencies from a number of foreign countries and members of the mainstream media who have been peddling their fake news to advance the storyline.

In order to "prove" all this, they are throwing spaghetti at the walls, and this week at least one strand stuck. It was reported a few weeks ago that Andrew McCabe, the embattled deputy director of the FBI, was planning to retire. It was abruptly announced on Monday that he was leaving immediately. After the news last week that, at Trump's behest, Attorney General Jeff Sessions had been pressuring FBI Director Christopher Wray to "purge" the agency of McCabe and other top officials Trump believed were among the plotters -- and Wray was described as heroically threatening to quit if he didn't have total independence -- this came as a bit of a surprise. It's unclear what role Wray played in all this, but we know that he and Deputy Attorney General Rod Rosenstein both went to the White House on Monday.

We do know that Donald Trump deeply loathes McCabe on a personal level, however. NBC News has reported that the president hit the roof when he saw video of former FBI Director James Comey getting on a government plane in California, after Comey found out from watching TV news that he'd been fired. Trump demanded to know if McCabe had authorized the flight. When the deputy director responded that he hadn't but would have done so if asked, Trump got very angry and supposedly said, "Why don't you ask your wife what it's like to be a loser?"

He was referring to Jill McCabe, who had run for political office in Virginia as a Democrat and accepted a donation from a PAC controlled by then-Gov. Terry McAuliffe, a Clinton ally. Her campaign had nothing to do with the FBI, and that happened before Andrew McCabe had any involvement with the Clinton investigation, but never mind. It was enough to make McCabe look like an obvious plant, in Trump's eyes.

Meanwhile, over in the House of Representatives, the president's loyal GOP manservants on the Intelligence Committee have voted to release the infamous "memo," while refusing to release the Democratic counter-memo at the same time. Chairman Devin Nunes, R-Calif., wrote the GOP document, which purportedly shows that Deputy Attorney General Rod Rosenstein signed off on a FISA warrant last spring to continue the surveillance of former Trump campaign adviser Carter Page. According to rumor, Republicans have cherry-picked evidence to make it appear that investigators depended exclusively or primarily on the notorious "Steele dossier," while many observers insist that no judge would ever have approved the warrant if that were so. Keep in mind that Page has been a suspected Russian agent (or stooge) since 2013, long before he came into Trump's orbit.

This particular drama is going to play out over the next few days. Trump has the final word on whether the memo can be released but has already signaled that it should be. What everyone's asking today is where all these machinations are leading. Quite likely the administration is systematically maneuvering for the dismissal or reassignment of Rod Rosenstein so Trump and Sessions can install their own henchman to oversee the Mueller probe. The idea is that they could slow it down or limit its scope by keeping Mueller from investigating areas the president wants to keep hidden.

Of course, Richard Nixon thought he had done that too when he reluctantly named a conservative Republican named Leon Jaworski as special prosecutor in the wake of the outcry over his firing of Archibald Cox during the Watergate scandal. Jaworski was skeptical of the investigation at first, but when he saw all the evidence he was appalled. There's no guarantee that the person Trump chooses will be "loyal" to him rather than the Constitution.

But on Monday night on Chris Hayes' MSNBC show, Frank Figliuzzi, who was chief of counterintelligence at the FBI under Mueller, floated another intriguing theory. He thinks this flurry of activity might also be to give Trump a rationale not to be interviewed in the Mueller probe, which people around the president see as maximally dangerous, since Trump is an inveterate liar and may not be able to stop himself from committing perjury. Figliuzzi suggested that would mean Mueller would seek a grand jury subpoena of the president, which would not be unprecedented but would probably be challenged in court.

So far the courts have maintained independence in dealing with the Trump administration's contempt for the rule of law. But there hasn't yet been a high-stakes political showdown in the Supreme Court. There was a time when people relied on the high court as the ultimate neutral arbiter of such partisan disputes, but after Bush vs. Gore we can have no more illusions about that. In fact, the Supreme Court's conservative majority provides role models for what Republicans are doing today. When push comes to shove, it's always party first, country second.