Many of the conservatives present said they wanted to deport the young mother, straight to her face 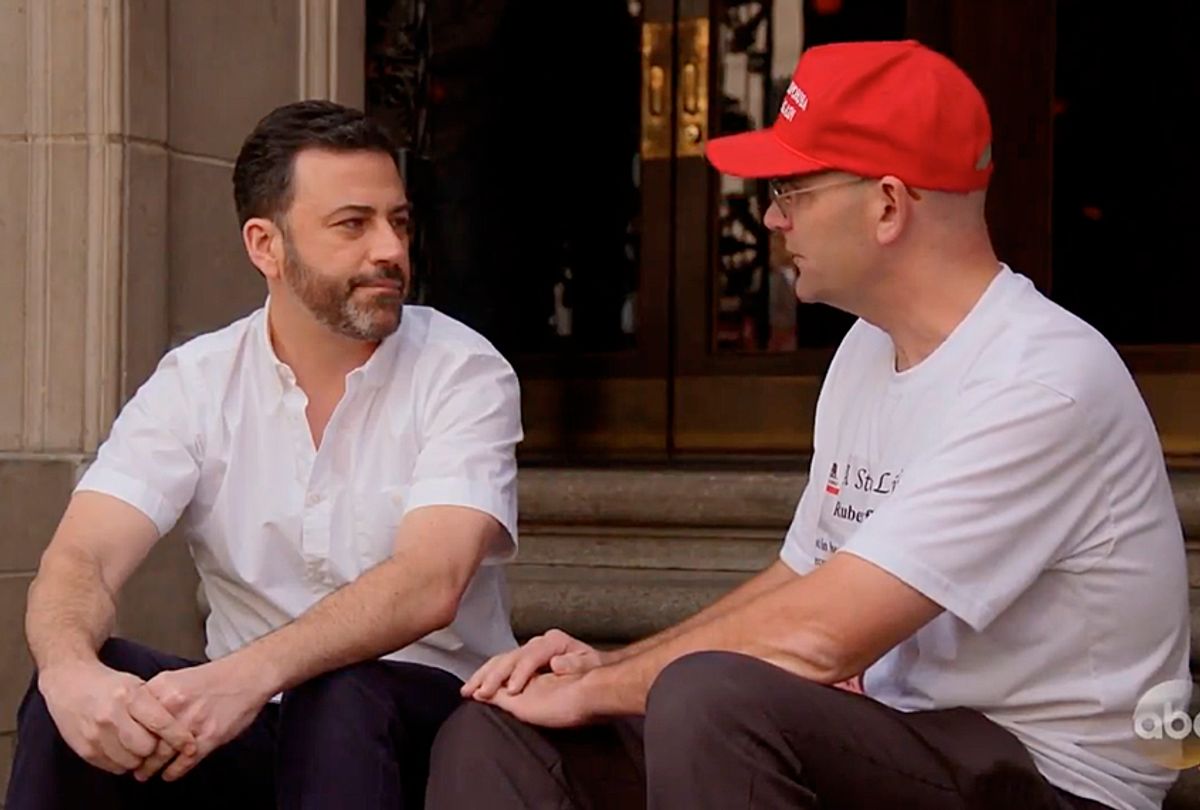 Tuesday night, Jimmy Kimmel sought to bring conservatives against DACA face to face with DACA recipients. It was a powerful segment that saw one fervent anti-DACA person change sides, at least in the case of the family sitting in front of her.

"The next big thing we have to deal with is DACA," Kimmel said on "Jimmy Kimmel Live," following the State of the Union. This was the same show during which the host interviewed possible Trump mistress Stormy Daniels.

"There's almost 700,000 people called dreamers in the United States," Kimmel reminded viewers. "These are young adults who are brought to this country as children; many of them could face deportation if DACA isn't renewed. The deadline for DACA is March 5."

Kimmel added that a "vast majority" of Americans support DACA, "but all of a sudden it's becoming a polarizing issue; it's become a bargaining chip for this stupid wall he wants to build," he said. "So we found some Americans who are very adamant, they do not support DACA, and I introduced them to a real family whose future relies on it, to see if we could bring people together by bringing them face to face."

The segment was titled "MAGA vs. DACA." Kimmel then briefly interviewed a handful of conservatives of various ethnicities and genders who were all against DACA. Each gave various reasons why DACA should not be renewed: Dreamers are here illegally, period; as adults they should have sought a legal path to citizenship; they should take their "skill sets" to their own countries (countries they've never known); America shouldn't be responsible for their parents' mistakes.

The anti-DACA interviewees then met Esmeralda, who was brought to the U.S. when she was two from Mexico City and is a DACA recipient, along with her young daughter Rose. Kimmel asked her a series of questions, the answers to which dispelled the usual myths about immigrants: Esmeralda has a job, pays taxes, has a Social Security card, is working to become a nurse and contributes to society.

Kimmel then turned the question back to the conservatives: Knowing all this, should Esmeralda be sent back to Mexico? Half of the conservatives in the room eagerly confirmed that they felt she should.

Kimmel then brought in Esmeralda's fiancé, Michael, an American-born conservative, who works at a maximum-security prison and is a soldier in the U.S. military. Kimmel revealed that Michael will be deployed soon, making the tentative status of DACA all the more pressing for their family and daughter Rose.

Did this make any difference, Kimmel wanted to know. It didn't, really. Get an immigration attorney, one person suggested (they have one). Go back to Mexico and apply for a green card. (They've looked into it, it could take up to 10 years, if successful at all).

One woman conservative said, regardless of her anti-DACA stance, "we live in a loving, compassionate, exceptional country." Kimmel disagreed. "I think this country has become cruel," he said. "Where is your compassion?"

This woman eventually admitted that she would make an exception for this particular family. The others didn't falter, which must make one wonder how many people support policies that affect people they never have to interact with. It's certainly easier to back discriminatory, cruel policies that tear families apart without ever having to witness the repercussions.

With the DACA deadline steadily approaching and, as Kimmel says, the debate over it as polarizing as ever, it's vital that conservatives understand the future of DACA isn't just about taking a stand on immigration, it's about 700,000 people who have lived in the U.S. for almost their whole lives, many of whom have American-born children of their own. The consequences here aren't theoretical — they would be tangible for many American families just like Esmeralda's.