Trump’s first State of the Union: A list of promises made — and broken

Trump's big speech mentioned numerous campaign promises: He's either broken them or is flat-out lying about them 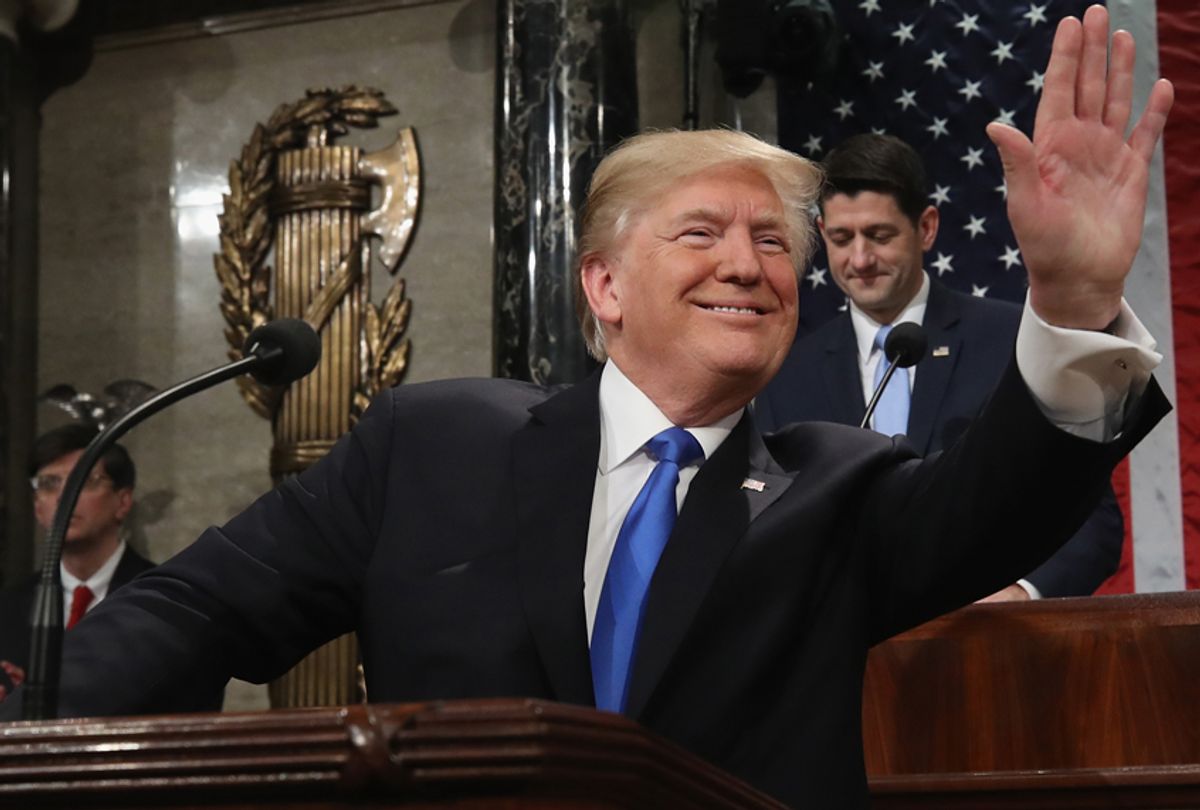 At his first State of the Union address, President Donald Trump was arguably most animated when he returned to his favorite red-meat line: “We proudly stand for the national anthem.” That Trump brought up the contentious NFL anthem protests -- not so subtly signaling at resentment against millionaire black athletes -- during a speech previewed by the White House as a “unifying” address is all anyone has to know about the state of the union after a full year of the Trump presidency.

Light on details, devoid of any mention of election integrity or the Russia investigation and full of standard-issue conservative rhetoric, Trump’s first SOTU was a mix of his typical Twitter braggadocio and campaign promises left unfulfilled in his first year.

On lowering drug prices: “One of my greatest priorities is to reduce the price of prescription drugs.”

After being named Person of the Year in 2016, Trump told Time: “I’m going to bring down drug prices. I don’t like what has happened with drug prices.” While campaigning in New Hampshire, a state ravaged by the opioid epidemic, Trump offered a solution: “If we competitively bid drugs in the United States, we can save as much as $300 billion a year.” According to the latest data available, however, prescription drug spending in the U.S. only totaled $297.7 billion in 2014.

On the opioid epidemic: “My administration is committed to fighting the drug epidemic and helping get treatment for those in need”

Despite declaring a 90-day public-health emergency over opioid abuse in October, Trump has done little or nothing to tackle the epidemic. Trump didn’t share any further details or promise any additional funding Tuesday night.

The Washington Post reported earlier this month that Taylor Weyeneth, a 2016 graduate of St. John’s University who had worked on the Trump campaign, was installed as the second-in-command at Trump’s Office of National Drug Control Policy (ONDCP). The agency is tasked with leading the federal government’s multibillion-dollar anti-drug efforts. (Weyeneth was later demoted and then resigned.)

On deregulation: “We have eliminated more regulations in our first year than any administration in the history of our country.”

As Bloomberg noted when the president held an event late last year to tout "the most far-reaching regulatory reform in history,” Trump is taking credit for "killing" more than 100 regulations that were already dead under Obama:

While the president has succeeded in undoing some major environmental and financial industry rules, a Bloomberg News review of the administration’s list found almost a third of them actually were begun under earlier presidents. Others strain the definition of lessening the burden of regulation or were relatively inconsequential, the kind of actions government implements routinely.

On jobs: “Unemployment claims have hit a 45-year low.”

Trump is operating on outdated figures.

As the Washington Post fact-checker noted on Tuesday,  “If Trump had given this speech last week, his claim might have been accurate.” As of Jan. 20, however, new jobless claims had risen to 233,000, a slight uptick since December.

The decline in the unemployment rate began in 2009, which was, perhaps not coincidentally, the first year of Barack Obama's presidency. Trump’s first year was marked by 2.1 million jobs being added to the economy — not an atrocious number, but the slowest year of job growth in six years, according to the Bureau of Labor Statistics. In Obama’s final year, the economy created 2.2 million.

On wages: “After years and years of wage stagnation, we are finally seeing rising wages.”

On Obamacare: “We repealed the core of the disastrous Obamacare. The individual mandate is now gone.”

This one sounds true, and got one of the biggest cheers of the night from the Republican side of the aisle. But of course the GOP hasn't repealed Obamacare, despite several attempts at it. And even Trump's specific claim, which sounded a lot like "we repealed Obamacare!" without quite saying that, is technically untrue.

As part of their recently-passed tax bill, Republicans effectively gutted Obamacare's requirement that most people purchase insurance. But the individual mandate is not gone yet. The GOP's tax bill doesn’t eliminate the penalty levied on those who don't abide by the mandate until 2019.