"This is the time they're gonna do it!" 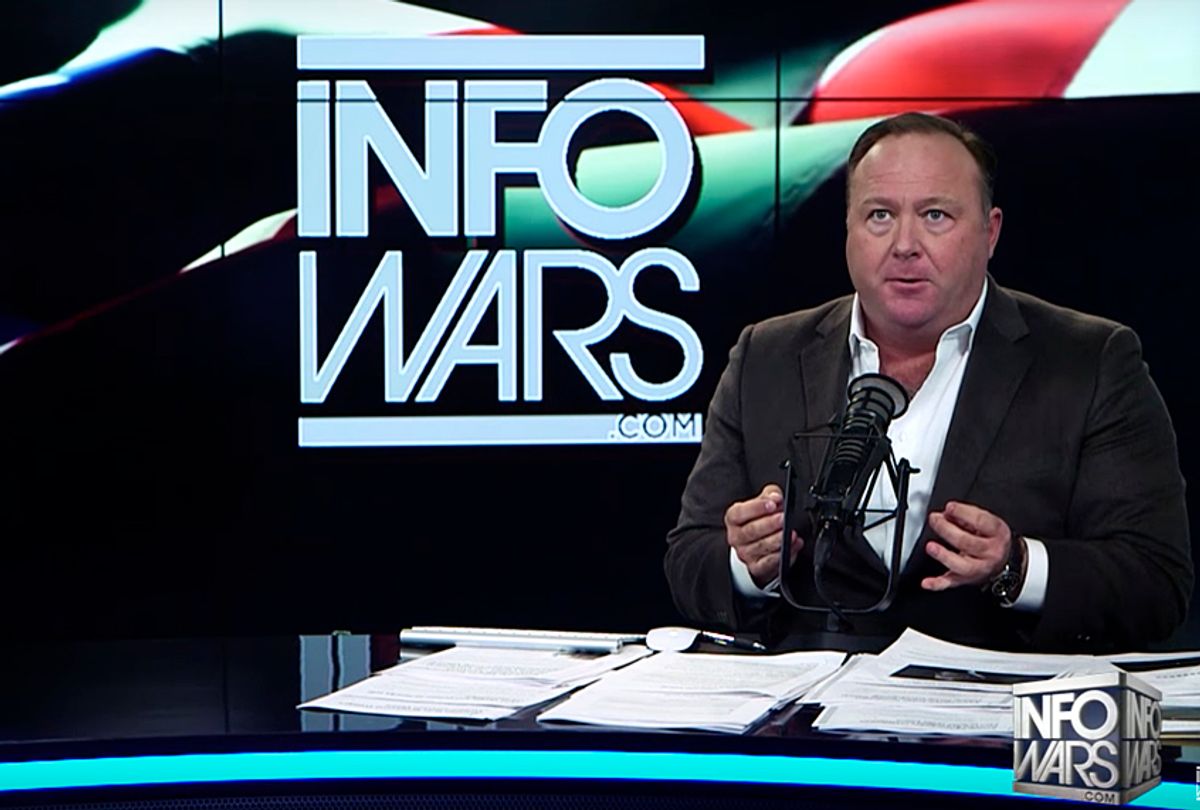 Alex Jones — once a fringe anti-government conspiracist and now a shill for President Donald Trump with a thriving side hustle in supplements — claimed that the primarily fictional "deep state" wants to "set a nuke off in D.C.," on the Tuesday edition of his show.

Jones was nearing the end of a looping rant about the possible release of the memo written by Representative Devin Nunes, R-Calif., for the House Intelligence Committee, a memo that reportedly casts the actions of the FBI and special prosecutor Robert Mueller's probe into the possible dealings between the Trump campaign and elements of the Russian government in a negative, conspiratorial light.

Specifically, it is alleged that the memo claims that investigators abused the Foreign Intelligence Surveillance Act while monitoring Trump workers and associates. On Tuesday, the committee voted along party lines to release the memo to Trump, who has indicated he intends to make its contents public.

The right has latched onto the idea of the memo as proof that the Russia probe is not only compromised by partisan elements but is the "witch hunt" many in Congress and the media have characterized it as. Pro-Trump Twitter users have been using the handle #ReleaseTheMemo in what has become a whirlwind of conspiratorial messaging.

Stepping into this fray, the ultimate right-wing conspiracy theorist, Jones, alleged that the "deep state" — the shadowy, fantastical cabal of liberal politicians, bureaucrats, media entities and operatives trying to unseat Trump and usher in a one-world government — will stop at nothing to prevent the memo from seeing the light of day.

"They’re on TV saying, 'Trump, we’re coming for you. We’re going to kill you,' to make it look like everything was peachy keen for all their operatives and their 'deep state' people," Jones said.

Jones embarked on a daring flight of fancy, imagining a conversation between liberal operatives and their "deep state" overlords, including recently retired deputy FBI Director Andrew McCabe. Throughout, he claimed that recently released text messages between investigators proved that members of the FBI were concerned their actions were illegal. But those texts suggested no such thing.

He then threw together some confused "Star Wars" metaphors. At first, Jones and his supporters were Luke Skywalker and the "deep state" was Darth Vader. Then, he wondered aloud what "deep state" tactic would be the Millennium Falcon swooping in to save Luke Skywalker, now the probe investigators, from Darth Vader, now Jones and his supporters. Then Jones said, "Let me tell you, right now the allegory goes either way, because we're about to fire those photon torpedoes down the elevator shaft or you could put us in the seat with Darth Vader and here comes the Millennium Falcon. We've got to blow that thing up, politically." Yep.

Jones saved his best for last. "I'd be watching all sixes right now [whistle, whistle, whistle] for what they're gonna pull." A "six" is military lingo for your rear. To "watch your six" is to watch out for what's behind you. You can only ever have one "six."

He added that the "deep state" wants to "set a nuke off in D.C., they want to pull some kind of hanky panky — this is time their gonna do it."

He then transitioned to a commercial.

It's been said before and will be said again, Jones — who continues to cast anyone in the government or media he simply disagrees with as an enemy of the American people who is actively plotting to murder innocents en mass and hand the country over to an unknown global authority — is going to get someone killed.

See the whole clip below via Right Wing Watch.