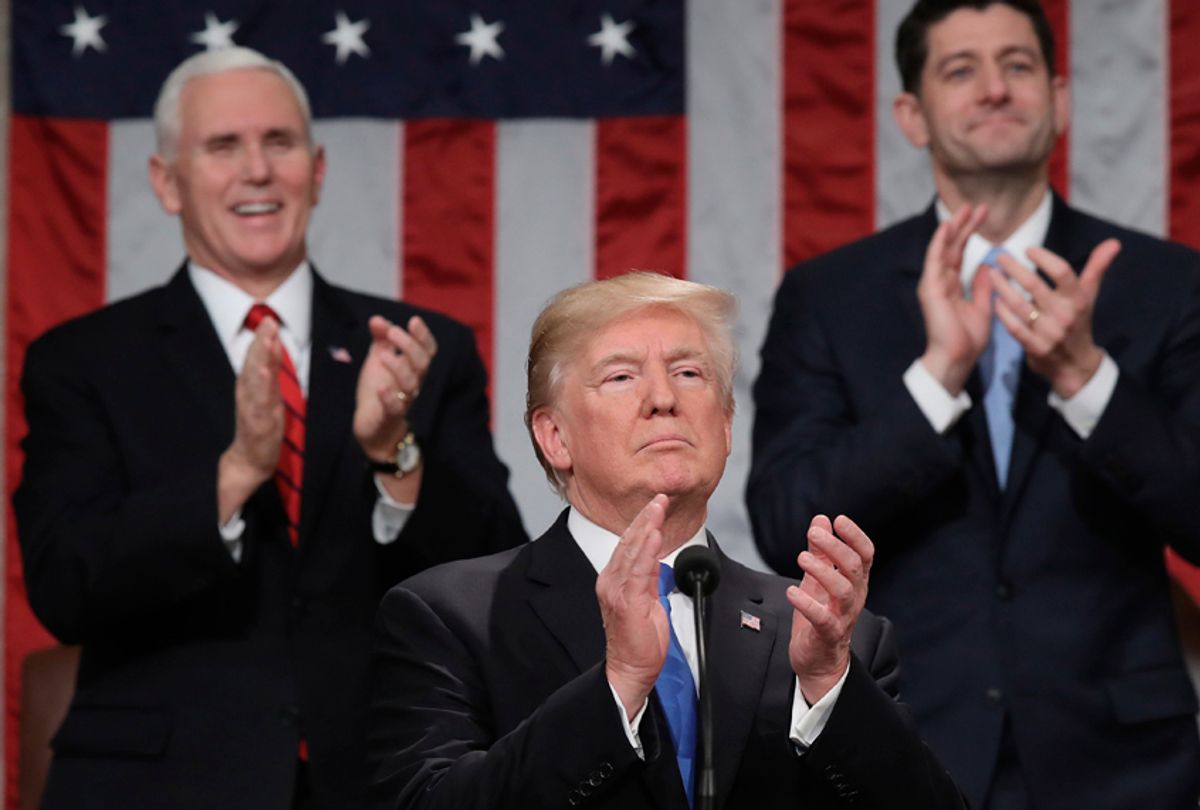 Donald Trump claps along with Mike Pence and Paul Ryan during the State of the Union address in the chamber of the U.S. House of Representatives, January 30, 2018. (Getty/Win McNamee)
--

The numbers for those who watched President Donald Trump's first State of the Union address Tuesday are in, and unlike his claims on Twitter this morning, it was not the "highest number in history" for such a speech before Congress.

According to Nielsen, approximately 45.6 million people watched Trump's 80-minute speech to Congress, based on the numbers from 12 television networks that aired live coverage. The numbers, which Nielsen collects each year, are solely based on those who viewed the speech via their televisions.

Thursday morning, Trump tweeted, "Thank you for all of the nice compliments and reviews on the State of the Union speech. 45.6 million people watched, the highest number in history." He also added that Fox News "beat every other Network, for the first time ever, with 11.7 million people tuning in." CNN confirmed confirmed both of those figures.

Now, the Trump White House has an established practice of reshaping what the president said to align more with reality. It won't take much to imagine Sarah Huckabee Sanders trying to angle this one to say that there were more people watching online than ever before — a fact that cannot be established — in order to back up the president's claim. But here, his own statements have left him out to dry: 45.6 million is a smaller number than 66.9 million by a long shot. There's no way around that, except if numbers don't actually work anymore.

While Trump's understanding of math seems to be off, the larger question is why is the president so obsessed with ratings? He made similar false claims about his show "The Apprentice" and about the crowd size during his inauguration. That lie spurred the creation of the phrase "alternative facts" during his administration's intense defense of his claims.

Some praised Trump's State of the Union address as "presidential" (by setting their bar lower, one assumes). But false bragging about ratings points to the fact that he simply has not grown in any way since taking office. Many on the right claimed the presidency would wash away his reality star persona. Trump has proven them wrong again.