"Oh my god what a beautiful, proud, thoughtful way to say that you will only help white people" 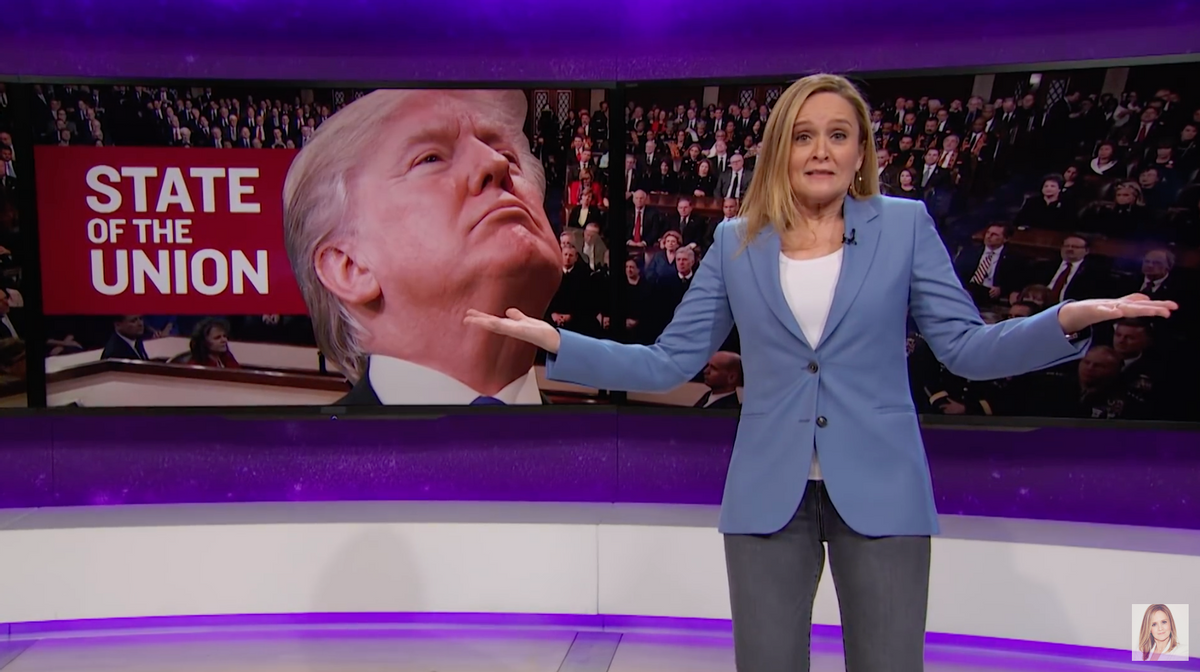 Samantha Bee ripped into President Donald Trump's State of the Union address, saying the president "took a break from screaming about immigrants to scream slightly more politely at lawmakers about immigrants." But while Bee started by talking about the state of Trump's America, it was her view of the lack of checks and balances in the government that resonated most.

The "Full Frontal" host showed a clip from September 2016, in which a commentator said that "a Supreme Court and Congress" would serve as a check on the president.

"Where did all that check-y balance-y stuff go wrong?" Bee asked, pointing to failures by House Speaker Paul Ryan, who wanted to focus on investigating the FBI in the wake of the Nunes memo. As Heather Digby Parton wrote in Salon Thursday:

The whole point of this, needless to say, is to throw mud on everyone associated with the Russia investigation in order to sow confusion among the public and give the president a rationale to curtail it, if not shut it down altogether. Judging from the Democratic response and the almost frantic objections from the FBI and the Department of Justice, the Nunes memo is based upon lies and omissions, to create a false impression. Worse, by releasing classified information, House Republicans appear to be exposing counterintelligence sources and methods for no other reason than to protect Donald Trump.

Or, as Bee put it: "So this so-called memo of Nunes' is more like a fun little fan-fiction he wrote in his spare time. And it's not even the good kind of fan fiction like the kind I write in my spare time."

The speech wasn't much better, Bee noted. Partly because it was geared to white people.

"Oh my god what a beautiful, proud, thoughtful way to say that you will only help white people," Bee said sarcastically. "And Trump's big speech was a chance for this shy little flower of a president to finally get out there and pat himself on the back a bit."

Trump also touted the repeal of the the Affordable Care Act's individual mandate, which levies a fine against those who don't have health coverage. "We repealed the core of disastrous Obamacare. The individual mandate is now gone," Trump said.

But his pronunciation of "Obamacare" sounded a bit strange, and Bee took notice.

"Oh that's a relief, I thought they were cutting Obamacare," Bee said. "No, you can definitely cut . . . the federally mandated all opossum health care plan."

Bee noted that she thought the speech would be "an optimistic, glass-is-half-full type speech."

She added, "And it was. Assuming that glass is half full of cyanide and I get to drink it. Because our president used the State of the Union to roll out his hot 2018 line of chilling policy proposals."

After rolling several highlights of Trump's speech, Bee said, "OK, how about this? I’ll pay Stormy Daniels $130,000 to say the president has a big dick and isn’t afraid of sharks, so he doesn’t blow up the world!"

Bee went on to slam Republicans over the controversy about their efforts to release a classified memo alleging FBI and Justice Department misuse of power in the ongoing Russia investigation. She said, "You know, it's disturbing to watch Republicans openly try to shut down this investigation, but should we even be surprised?" Bee asked.

Before she rolled a clip of Trump, she added, "Last night when Trump roared an actual fascist slogan, they gave him a standing ovation"