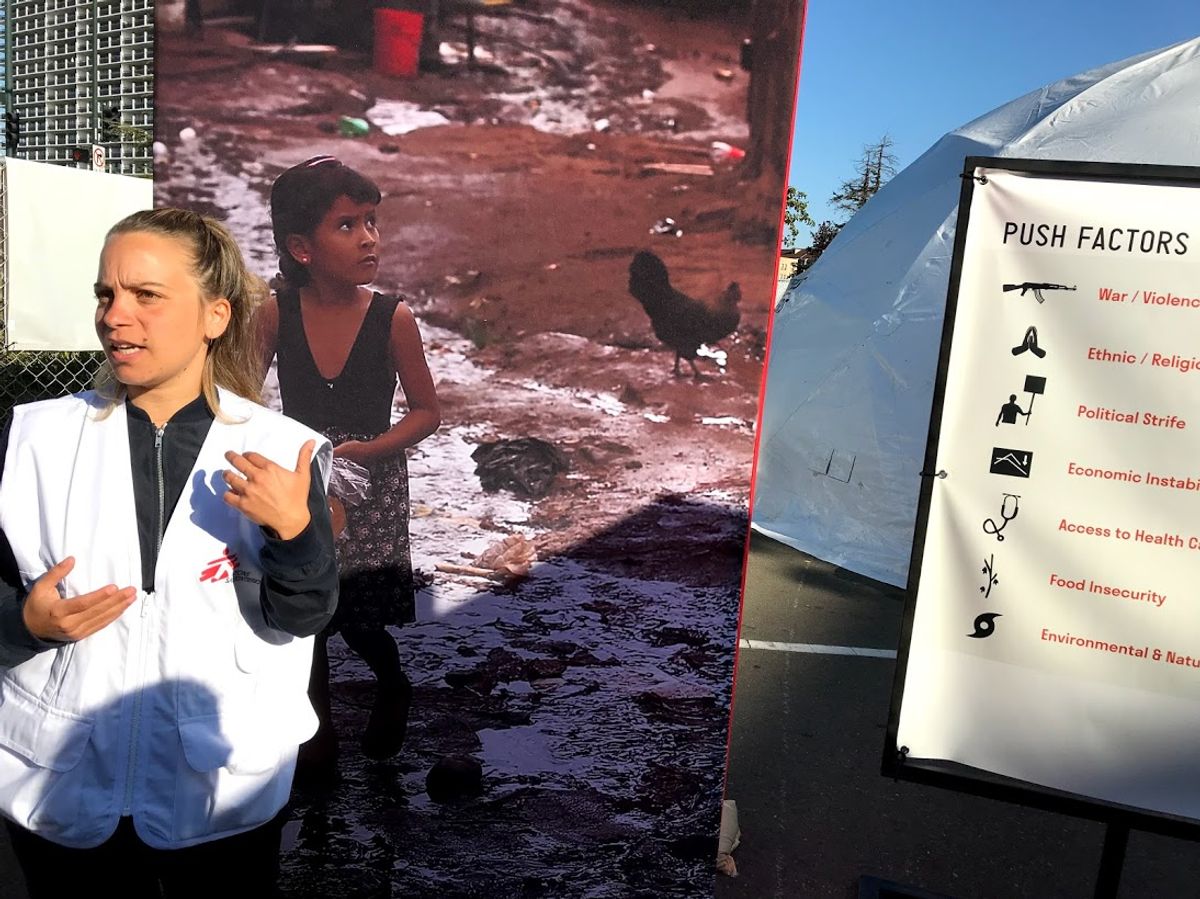 In order to really understand someone, they say, you have to walk a mile in their shoes. I received an invitation from Doctors Without Borders recently to do just that.

The international rescue organization, also known as Medicins San Frontiers (MSF), provides humanitarian aid to refugees: people who have literally sacrificed everything in their lives to flee the only homes they’ve ever known. The families who make the difficult decision to leave their homelands are survivors. But as we see from widespread support for the Trump administration’s attempts to pass a travel ban against people from the hardest-hit nations in the refugee crisis--places like Syria, Somalia, Chad and Libya-- many Americans don’t see survivors -- they see potential threats.

Last year, MSF created "Forced From Home," a free immersive exhibition that toured the United States. The purpose of the experience was to give average Americans a first-person perspective of the life of a refugee, from the moment they leave home to the time they make it — if they make it — to a border crossing or refugee camp.

The exhibit I visited was set up in a convention center parking lot in Oakland, CA. My tour group included a high school teacher with a few of her students, a woman who worked in humanitarian aid herself and a woman who had previously volunteered for a refugee organization.

Christina Psarra, one of the heads of mission for Doctors Without Borders and my latest guest on "Inflection Point," was our guide. She greeted us and the experience began:

Just imagine you’re running from the only home you’ve ever known. Literally running.

Our group had 60 seconds to choose five items to take with us on our journey — things like money, a cell phone, shoes, clothing, a passport and medicine.

Next we headed to a rubber boat that fit maybe 15 people safely. Before we got on the boat, we were told to give up one of our five items. At every stop on my virtual refugee experience I was told to give up another one of my five items until, at the end, I had nothing.

Christina told us that sometimes people have to leave behind family members.

Once aboard the lifeboat, Christina held up two life vests and told us that were this an actual boat, the life vest we each received was probably fake. The boat for 15 would eventually carry up to 60 passengers including men, women and children who cannot swim.

I was on dry land, this was not real, but my heart was actually racing.

Once off the boat, we walked to an area with barbed wire: our destination. Instead of experiencing a wave of relief for arriving safely at a place of refuge, I felt as though I was entering a prison. And in many cases, especially for women, that is the case.

Christina informed us that in some countries when women arrive at refugee camps without husbands, they and their children are considered “without citizenship.” Meaning they are a non-person. They can’t work and they can’t get papers, which means they can’t get out of the camp once they’ve been admitted.

The journey goes on. We walked through a tent camp, with children’s dolls made of plastic bags, cars made from milk jugs and even bug spray cartons.

Finally, we arrived at the MSF aid station, where MSF workers are stationed for months at a time to help refugees with nutrition, malaria, cholera and even childbirth. In some places, hundreds or even thousands of people are processed every single day. It’s an enormous undertaking.

So what’s left over for her? The other side of the refugee story is the stress for the aid workers and their 24/7 schedule. And with Christina putting so much of herself into her work, what does it take not to burn out and what keeps her coming back? Listen to our conversation:

The "Forced From Home Exhibit" will be back on tour; check their website for upcoming dates.