Most Americans just got a pay raise. Yes, it's phony — but Democrats must fight or lose control of the message 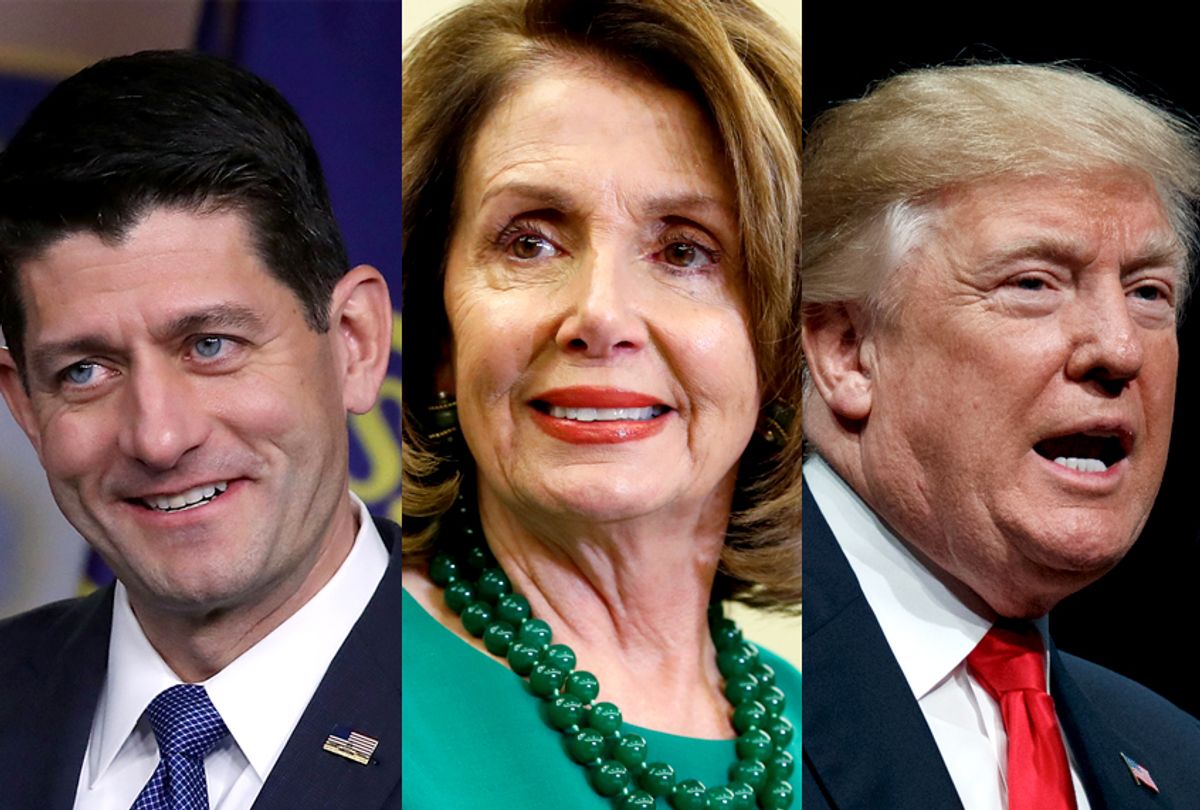 Most Americans got a pay raise this week, with their Feb. 1 paychecks. Now Republicans are on a self-congratulatory tour that Democrats have no clear way of stopping.

One month ago, the GOP's tax plan was the second most unpopular piece of legislation in modern U.S. history. But due to changes in the IRS withholding tables – a result of the recently passed GOP tax plan – tens of millions of Americans saw a small increase in their take-home pay on Thursday.

A confident President Donald Trump traveled to a retreat for congressional Republicans on Thursday to congratulate them on a job well done.

The list of companies paying so-called “Trump bonuses” as a result of the tax legislation is at 300, according to Americans for Tax Reform. The Grover Norquist-led group is soliciting more stories to amplify the mythology being built around the GOP tax cuts.

During his State of the Union address on Tuesday, Trump (incorrectly) bragged that the tax plan he signed into law was the largest tax cut in history. To Republicans, their tax plan – a massive redistribution of wealth away from public investment to private enrichment, which primarily benefits the wealthiest people in our society – is an unmitigated success. Touting onetime payouts from corporations who cite the tax cuts as the source for the extra cash, Republicans have worked hard to sell one of the easiest things to market in American politics. From Trump on down, Republicans have their rhetoric on tax cuts down by rote.

House Speaker Paul Ryan, like a robot stuck on repeat, even rattled out the standard praise for tax cuts when he was asked about a Democratic push to get Rep. Devin Nunes, R-Calif., off the House Intelligence Committee.

“I think they’re just playing politics and I think they’re looking for a political distraction, is what I get out of that,” Ryan said to reporters at the GOP retreat on Thursday. “Look, the tax cuts are working. Tax reform is working.”

While the Republicans huddled in the hills of West Virginia to sing from the same tax cut hymnal and attend a talking points seminar, at which Ryan suggested “workforce development” was a better euphemism than “welfare reform” for their plans to dismantle what is left of the social safety net in America, Democrats fumbled their multiple post-SOTU responses this week. The Washington Post’s Dana Milbank posted a small sampling of the meandering responses to Trump’s first State of the Union:

Rep. Linda Sánchez (D-Calif.) said that her “first step” would be the “dreamers.”

Minority Leader Nancy Pelosi (D-Calif.) hopped from immigration to opioids, budget funding caps, Trump’s self-congratulation and lack of vision. She briefly pivoted to the economy (“he pads the pockets of the top 1 percent”) before returning to immigration, then Russia sanctions.

Other Democrats have suggested copying Republicans’ strategy of “repeal and replace” on Obamacare to run against the tax bill.

“We should repeal it and I think we should offer an alternative tax plan," Rep. Ro Khanna, D-Calif., a leading House progressive, told The Hill this week.

“There are probably a small number of provisions we might not repeal,” Senate Minority Leader Chuck Schumer said shortly after the bill was signed into law. But he also called for a “drastic overhaul" of the tax package, "aiming it at the middle class, not the wealthy and powerful.”

It certainly makes sense for Democrats to offer an alternative tax plan, along with immediate relief for voters in blue states who have been saddled with increased taxes. (Democratic lawmakers in California, New Jersey and New York are working on plans to allow residents to continue deducting their state and local income tax from their federal filings.)

But as they develop their own plan, Democrats can’t allow themselves to be outsold.

Without resorting to the language of “crumbs” or "repeal and replace" that can be easily mocked by Republicans, Democrats must continue to hammer away at the points of the GOP tax plan that made it so unpopular to begin with. The scattered bonuses, cheered in unison by Republican lawmakers and right-wing media alike, have drowned out the other big news related to the GOP’s tax bill this week: It is draining the U.S. Treasury faster than expected.

The nonpartisan Congressional Budget Office issued a report on Wednesday advising Congress to consider raising the debt ceiling earlier than anticipated to account for the loss in revenue brought upon by the GOP tax legislation. The tax cuts, passed in late December, are expected to lead to a decrease in government revenue of $136 billion in 2018. The federal government is now set to default on its debt within a few weeks.

This comes as the White House is following up Trump’s vague State of the Union promises this week by floating a plan to fund $200 billion in new infrastructure spending -- but entirely by further slashing the federal budget.

There are a ton of pesky details hidden behind the bold headlines and GOP talking points. To qualify for the $1,000 tax-cut bonus at Walmart, Home Depot or Lowe’s, for example, you have to have been employed at one of those companies for at least two decades. According to the Bureau of Labor Statistics, the median tenure of workers in retail is a little over three years. The very day that Walmart announced its bonuses it announced that 10,000 employees at its Sam’s Club locations would lose their jobs.

In a Reuters/Ipsos poll released this week, only 2 percent of Americans said they had gotten a raise or bonus due to the tax cut. Fifty-eight percent of American adults still believe that the tax bill will primarily help corporations and the wealthy. Democrats could use that to hit their favorite target on the campaign trail this fall: Trump. If Democrats take back the House they’ll have the legal authority to look at Trump’s tax returns under a law that was invoked in the 1970s by a bipartisan commission to force former President Richard Nixon to disclose his returns. Republicans have declined to use it on Trump.

Coming up with a better and fairer plan is a crucial aspect of resisting the Republican tax cuts, and ultimately reversing them. But Democrats are in danger of squandering yet another opportunity if they lose the messaging war in the meantime.