Texas wages war against imaginary censorship — in support of hate 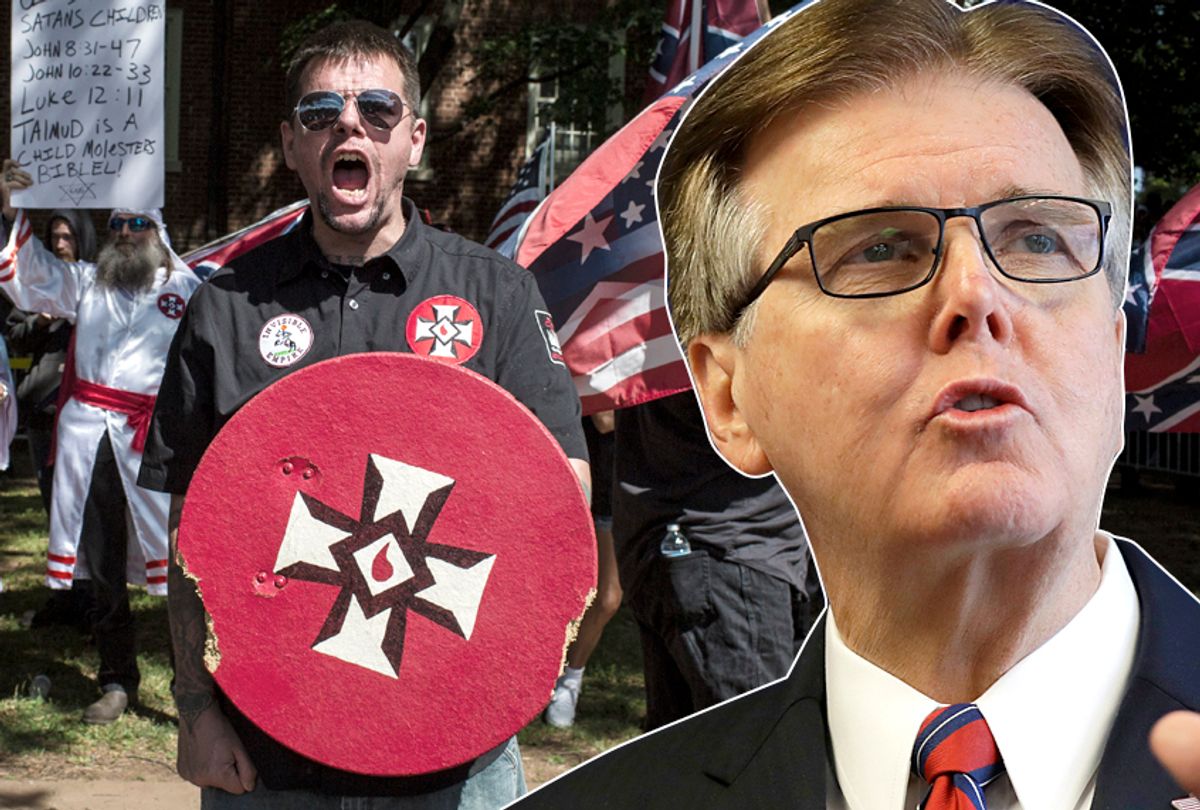 Universities in Texas have a white supremacist problem. In the past couple of years, but especially since the election of Donald Trump, hate groups have targeted campuses in the Lone Star State with recruiting events and leafletting campaigns. In one case, a group of torch-wielding neo-Nazis had to be booted off the University of Texas campus, and that was in the liberal bastion of Austin. A new report out by the Anti-Defamation League (ADL) shows a threefold growth in the number of white-supremacist propaganda efforts on college campuses, with schools in Texas being hit the hardest, racking up dozens of incidents in the past couple of years.

But the Republicans who run the state government in Texas aren't really concerned about the explosion of hate-group recruitment in their state. Instead, they are focusing their attention on a problem that seems to be largely imaginary: the supposed censorship of conservatives at the hands of "politically correctness." By redirecting the discussion away from the real problem and towards a fake one, Texas Republicans in the state are providing cover -- and at least implicit sympathy -- to racist extremists who view young college populations as hot targets for recruiting campaigns.

"Perhaps it started with 1990s movement on political correctness, but we know that now there’s a running trend that college students should be protected from ideas that they find to be offensive or unpopular, and the means to accommodate that is to censor speech," claimed Brantley Starr, Texas' deputy first assistant attorney general, at a state Senate hearing held at Texas State University on Wednesday. Even though the state legislature isn't in session, Lt. Gov. Dan Patrick was so worried about the threat of political correctness that he called for an interim hearing to address this invented problem, and the Republican-controlled Senate was only too happy to comply.

The choice of Texas State for the Senate hearing is noteworthy, as the school's campus in San Marcos (about halfway between Austin and San Antonio) has been heavily targeted by white supremacist groups like Vanguard America. These groups have repeatedly hung flyers on campus with neo-Nazi slogans and, in one case, five young men — none of them students — were arrested for criminal trespassing when they were caught posting such flyers.

White supremacists target college campuses, Carla Hill of ADL told Salon, because they "are looking for young white men, and that’s where you will find a nice collection of young people." They're also seeking attention and notoriety, she added, and hope to intimidate nonwhite students and staff.

The topic of flyers came up during Wednesday's hearing, when Republican Sen. Bryan Hughes grilled Texas State University president Denise Trauth "about literature distribution, whether it’s gospel tracts or other religious information or political stuff." When Trauth assured Hughes that the school doesn't stop people from handing out flyers, he replied, "I think some do, but I appreciate that you wouldn’t want to."

What Hughes conveniently failed to mention was the school's actual problem, which is non-students passing out white supremacist tracts that call for "blood and soil" Americans to reject "cultural Marxism," and accusing colleges and other schools of peddling "anti-white propaganda."

"Each time the posters have gone up, we’ve immediately taken them down," university spokesman Matt Flores told Salon, But this isn't the school engaging in censorship of ideas, he added. These flyers were being posted on university buildings and other facilities in violation of rules that apply to everyone, the people hanging them were not students and not authorized to be on campus at all.

Texas State sophomore Benjamin Salinas, social media director for the school's College Democrats, testified at Wednesday's hearing and said that the whole affair "felt like a giant show" to peddle a fundamentally false narrative that conservatives are "somehow the ones who are oppressed on campus and in society." He told Salon there was no censorship of anyone's ideas at Texas State. "College Democrats, we’re always on the quad tabling and stuff," he said, "and Young Conservatives and Turning Point USA [a conservative group] and College Republicans are always out there as well." He sees no evidence, he said, that conservative viewpoints are "being shut down or censored in any way.”

While the hearing at Texas State went on for hours, the evidence that any Texas schools have shut down debate based on content or ideology was meager at best. There was one incident when a right-wing state representative named Briscoe Cain was turned away when he showed up at Texas Southern University to speak. But the school later sent out a statement noting that the event had not been "scheduled in accordance with University policy" and that Texas Southern had extended Cain an invitation "to return to campus for deliberative dialogue at a University-approved event." Salon reached out to Cain, who has publicly portrayed himself as a victim of censorship, to ask whether would accept this invitation to speak. He did not respond.

The other evidence of supposed censorship mentioned at the hearing was also less than compelling. Tony McDonald from Empower Texans, a far-right dark money organization, spoke at length, arguing that it was a form censorship for schools to charge security fees or to put basic demands on student organizations, such as finding a faculty sponsor, in order to get official status. But meaty examples of universities actually suppressing student debate failed to emerge. Multiple speakers spoke of "bias response teams" as if these were censorship organizations, but while these teams often speak out against hate speech, no examples were provided of actual silencing.

All this hand-wringing about imaginary censorship might just be a comical sideshow, if the backdrop wasn't the very real problem of outside groups invading college campuses to spread far-right or white supremacist propaganda. In that context, as Lecia Brooks of the Southern Poverty Law Center told Salon, the "white supremacist rhetoric becomes normalized." Members of hate groups can frame themselves sympathetically as victims of politically correct censorship every time a school takes normal steps to ensure safety and order on campus by taking down unauthorized flyers, or to kicking out disruptive outsiders who are on campus entirely to cause trouble.

In addition, Brooks worried that conservative rhetoric about "free speech" is just a cover story for the right's desire "to squelch dissent" by claiming that conservatives' rights "are being abridged" in some unspecified manner.

Manuel Escobar, a representative for the Central Texas branches of the ADL, testified at the hearing about the ways that "free speech" is being used as an excuse for conservative forces, in a painfully ironic twist, to suppress the free speech rights of students and university officials.

“Last year, legislators in 17 states introduced legislation purported to protect free speech on campus," he explained. "Some proposals mandated suspension and/or expulsion as the result of infringing the expressive rights of others, without defining what constitutes an infringement. Fear of such harsh discipline will inevitably have a chilling effect on student and faculty speech.”

Which is to say that there's a real threat that conservative lawmakers are trying to enact laws that could get students expelled for protesting. Escobar also noted that some legislators have proposed forcing "neutrality" on universities, which would suppress the right of schools to issue statements denouncing hate speech, for example.

Right now, white supremacists and other alt-right activists possess a constitutionally-guaranteed right to rent rooms on campus to hold events or, if they are invited by student groups, to speak for free. Groups like the ADL do not object to their right to do so. But "neutrality" rules or harsh limits on student protest would kneecap the ability of school officials and students to openly condemn hate speech and offer counter-arguments endorsing tolerance and opposing racism. The result would be "free speech" for bigots, but censorship for those who oppose them.

The hearing in Texas on Wednesday was a disturbing demonstration of the way that mainstream Republicans, particularly in the era of Trump, have become handmaidens to the white supremacist movement. While conservative speakers and politicians have largely ignored, or occasionally denounced, prominent white supremacists like Richard Spencer, the false narrative that snowflake liberals are clamping down on campus conservatives — only serves to empower white supremacists and other extremist groups.

There's no real evidence that vigorous campus debate between conservatives and liberals is being suppressed, in Texas or anywhere else. Claiming otherwise only serves to muddy the waters, in classic Donald Trump style, and lend credence to white supremacists who want to play victim for being required to follow the same rules as everyone else.