"The Trade" and the many faces of our opioid crisis 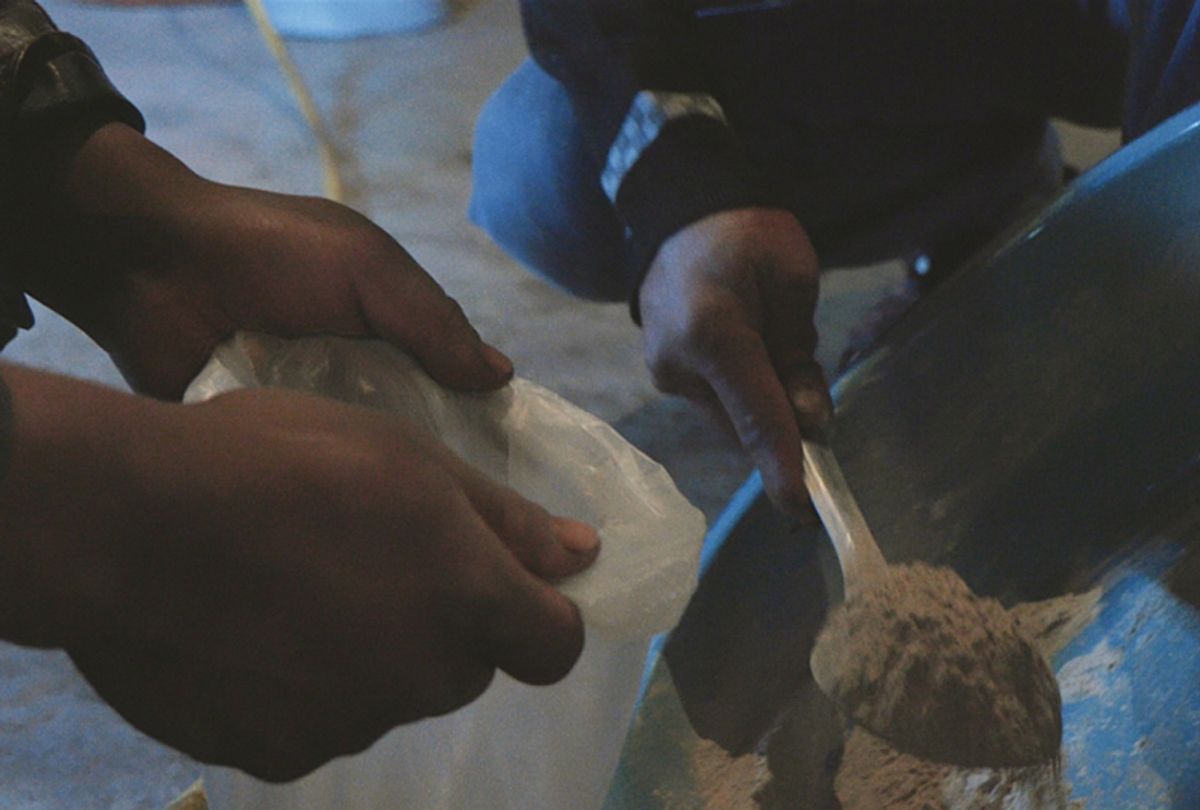 A scene from "The Trade" (Our Time Projects/Courtesy Of Showtime)
--

It’s Christmas time in Guerrero, Mexico, and under a bright if cloudy sky, a cheerful clown entertains a crowd of enthusiastic kids before introducing the kindly man sponsoring the party. On the outskirts of the gathering, men bring in large plastic sacks filled with toys, as he plaintively tells the smiling children that when he was little, he would hear about Santa Claus. He would wait for him and the Three Kings every year, he says, but they never came. It was just lies, he told himself. The sea of grins recede for a moment.

This, the kindly man continues, is the reason he wants to give something to all of the children. The men hand out the gifts. Nearby a group of masked people toting automatic rifles watches over the gathering. One young boy asks for a toy gun.

The man playing Santa is Don Miguel, boss of a modest stretch of heroin poppy fields that effectively employs an entire hamlet, one of many subjects filmmaker Matthew Heineman follows as part of his devastating five-part Showtime documentary series “The Trade,” debuting Friday at 9 p.m.

This is not light viewing, but the level of access Heineman and his directors of photography gain is extraordinary and, at times, anxiety-spiking. The danger and risks these filmmakers undertake to demonstrate the vast scope of the opioid crisis is absolutely palpable. So, too, is the desolation heroin has inflicted upon families north and south of the border.

In Atlanta, a mother wearily struggles to keep her son from relapsing. In Columbus, Ohio, detectives pull over a vehicle to catch desperate users, hoping to use them to get to the next link in a chain of dealers, distributors and kingpins that stretches all the way back to Mexico. The addicts Heineman follows are skeletal, sickly and anguished. Their families, worn out battling this demon that won’t let go, try everything from pleading to tough love to all-out enabling their hunger for a fix. Some stop fighting entirely. And this informs the motives and methods of detectives and sheriffs confronting users and even minor network bosses with calm but firm reason, even empathy in many cases.

“I’m depressed because I use dope. So I continue to use dope,” explains Brittany, an addict introduced in the second episode. “If that’s not insanity, I don’t know what is.”

All the while, whenever the storyline returns to Don Miguel he is warm with his subordinates, all of whom profess their loyalty to him. It’s all strategy and theater meant to keep an enterprise under threat by local gangs in his control — and, one gets the sense, to prove to the Americans with the cameras that he is not like the other monsters sending drugs into America’s suburbs. He professes to care for the poor people in his town. He is the only option most of them have.

“Life in the mountains is complicated,” one of his laborers observes. “There isn’t any other work here. And the market for heroin keeps growing and growing. So we work to survive.”

As he did in the 2015 Oscar nominated feature documentary “Cartel Land,” Heineman and his crew insinuate themselves into the lives of his subjects and achieve a level of closeness that can be nakedly unsettling to witness. There are times when the camera almost feels too close; the camera doesn’t flinch as a syringe hangs from an addict’s arm, the needle still deep in a vein. Nor does the crew falter as they tag along beside the boss’s crew as they hunt interlopers, automatic weapons in hand, ready to meet violence with violence. Or as they interview a masked enforcer who says with no shortage of glee that he’ll dismember old women, minors, anyone who he needs to, “for the heroin.”

Given all of this, although this observation may read strangely, “The Trade” is visually arresting. Heineman and his team carefully frame the poppy-strewn mountains as conscientiously as the dilapidation surrounding the men and women in the grips of the opioid thrall. Some of the most affecting scenes, actually, are wide shots of highways crowded with cars or cityscapes.

Documentaries use these shots to establish place and setting, but here, Heineman finds a way to make them reflect the Sisyphean nature of the struggle. Every time we patch one hole, a law enforcement official observes in voiceover, a new hole opens up. Endless traffic on a highway flowing like fluid through veins illustrates what he’s talking about: Any of those cars could be carrying drugs to a suburb. But which? What good is a patch against a broken dam pounded by a flood?

“The Trade,” in the way of the finer fictional and non-fictional views of the drug war that have come before it, holds no simple answers because there are none. Indeed, watching four out of its five episodes leaves a person with the sense that there is no winning this war. That no matter how much money is spent or how tall the government can build that mythical border wall, hunger and desperation will ensure that heroin will find a way into the United States.

The need for a work as expansive and thorough as “The Trade” is urgent. Only recently, Mexico’s interior ministry reported a record 29,168 murders in 2017, higher than the homicide rate at the peak of the country’s drug war in 2011. The direness of Mexico’s situation is reflected in central Ohio, number one in the nation for opioid overdoses and, an official in “The Trade” reveals, a gateway for North American drug trade.

Heineman’s series takes us further than declarations and stats, however, and places us nose to nose with the human toll, speaking to every side of what seems to be an unsolvable conundrum.

“They are fighting a very large enemy called money,” says that homicidal strongman. “And against him, no one can win.”

There may not be a more effective way to understand the sinister pervasiveness of this crisis and the destruction it is wreaking in the United States and Mexico than to spend time with the different kinds of people it's holding in its net, in addition to the people trying to destroy it and a few of the millions caught up within it. None of this makes “The Trade” easy to watch, but it is transfixing.