Maharishi Mahesh Yogi and me: Seeking enlightenment with the Beatles' guru

How studying and working for Maharishi Mahesh Yogi changed my life 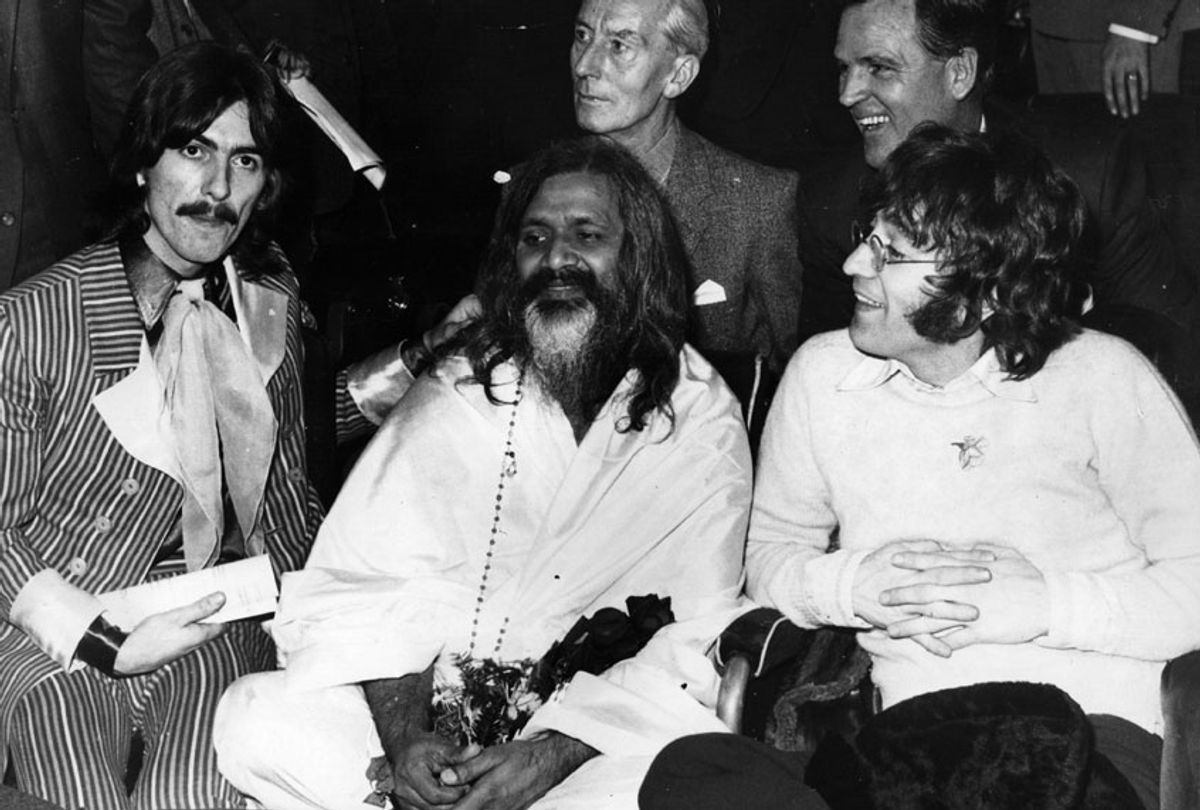 Excerpted with permission from "Maharishi and Me" by Susan Shumsky. Copyright 2018 by Skyhorse Publishing, Inc. Available for purchase on Amazon, Barnes & Noble, and IndieBound.

Disciples cannot take knowledge from a master until they raise their level of consciousness so knowledge will flow to them. —Maharishi Mahesh Yogi

Spinning in the eye of his hurricane was at once glorious, stirring, and electrifying, and wholly devastating, maddening, and mortifying. Riding an emotional roller-coaster, I ricocheted from heavenly delight to hellish desolation and back.

This extraordinary man, who moved me so intensely, came from India — a land of mysteries. Until the mid–twentieth century, its vast spiritual treasures remained largely hidden from the West. A significant change occurred when he left for Ameri­ca’s shores and made “meditation” a household word. His brush with celebrities placed him in the spotlight. But his true legacy was Transcendental Meditation.

As a former disciple, I lived in his ashrams for twenty-two years and served on his personal staff for six years. For extended periods, I enjoyed close proximity to the most renowned guru of the twentieth century — Maharishi Mahesh Yogi.

Submission to a guru is an abhorrent idea in the West, where worldly achievements, individual assertion, and winning define us. Eastern wisdom is considered inferior to science. However, the venerable Indian tradition seeks loftier treasures. There the goal is to trade up ego identification for realization of the higher self (atman).

India is where disciples seek gurus to guide them toward spiritual enlightenment. But the alchemical process rendering this transformation has largely been concealed. Disciples seldom write about their “spiritual makeover,” as frankly, it’s incredibly embarrassing. Gurus don’t reveal their closely guarded methods. Otherwise the spell they cast on disciples would be broken.

Loyal devotees impart only highest reverence toward their gurus and paint roman­tic pictures. They extol their guru’s God-like qualities or quote their bespoken pearls of wisdom. Rarely do they divulge anything other than how great the master was, what miracles transpired, and what marvelous experiences were had.

Practically no one discloses the fact that, for the disciple to achieve moksha (free­dom from the karmic wheel), the ego must die. The raw truth is this: realizing who we really are (infinite being) rather than who we thought we were (limited self ), means giving up ego. That’s why higher consciousness is termed egoless. Ego death isn’t roman­tic. It can be devastating and shattering.

Irina Tweedie, author of "Daughter of Fire," said that to realize their higher self, dis­ciples must undergo “self-annihilation”— “turned inside out, burned with the fire of love so that nothing shall remain but ashes and from the ashes will resurrect the new being, very unlike the previous one.”

To our Western mind, gurus might appear angry or abusive. But at what point do tough-love tactics cross into “abuse”? How do gurus differ from coaches, athletic trainers, or drill instructors? Why is it okay for tough trainers to coach protégés, yet not okay for tough gurus to train disciples?

Just as coaches bring out the best in their charges, true spiritual masters elevate their students. In a unique relationship of unconditional love, disciples surrender to gurus, and gurus lift disciples to God-realization. This time-honored Eastern tradi­tion, which transforms students into masters, has survived for millennia — because it works.

I wouldn’t dare liken myself to revered saints who’ve achieved enlightenment at their gurus’ hands. However, Maharishi’s relationship with his students, which I wit­nessed over two decades, was similar to that of other disciples with their great masters.

Why do Westerners find gurus and cultish ashrams repugnant, considering our dominant religion began with a spiritual master and twelve devoted disciples? That master treated disciples with tough love in a way that might resemble Maharishi. The disciples responded as we did under Maharishi’s guidance — with actions deemed tim­id, immature, clueless, and sometimes faithless.

Only a handful of six million who learned Transcendental Meditation (The TM Technique) spent any time whatsoever in Maharishi’s presence. Out of those who wit­nessed his antics, few understood his motives. Many who got scorched by his fire still remain baffled. A good number consider themselves victims.

As I morphed from a painfully shy teenage rebel to a disturbingly self-doubting but determined young seeker through Maharishi’s guidance, then into a spiritually aware teacher, I found what I was seeking, but not as expected.

Ultimately, I discovered the divine presence within me. Even though I no longer have a guru in physical form, I enjoy an intimate relationship with the inner guru. Any-one can experience this divine source directly, without accepting dogma, and without middlemen, such as priests, pastors, psychics, astrologers, rabbis, or gurus. Once we let go of ego attachment, we become our own guru and miracle maker. The kingdom of heaven is within us.

I feel Spirit has guided me always. A higher plan has been at work, threading my life with divine intervention. Some might say I live a “charmed life.” Though my days have been peppered with challenges, multitudes of blessings continually fall into my lap. Even during crisis, the solution always appears—usually instantly. Generally I don’t let anything, including myself, stand in my way. If I want to accomplish something, I just do it.

Luckily, I found a simple way to experience divine love directly, at will — anytime I ask. This has given me great solace. Once I made this connection, never was I alone again. The anguish of separation was gone. This mystical connection of love, light, grace, and wisdom is the pearl of great price, more precious than rubies or gold.

My life has been (and continues to be in spite of the absence of Maharishi’s physical presence) lived in devotion, led by Spirit daily — even when I was younger and didn’t know it.

Until his death at age ninety, Maharishi lived in Vlodrop, Holland. Working day and night, he was still trying to establish world peace. “Maharishi Peace Palaces” were theoretically being built in one hundred U.S. cities and three thousand cities world­wide. The plan was pundits would vibrate world peace by chanting the Vedas around the clock in these palaces.

Starting in 2002, about 150 wealthy devotees took Maharishi’s “Enlighten­ment Course,” forking over a cool million dollars per person to fly to Vlodrop, watch Maharishi on a video feed, and donate to the alleged permanent establishment of ten thousand pundit boys in India chanting day and night for world peace. Course graduates were bestowed golden medals and crowns and dubbed “Raja”(the Sanskrit word for “king”). They rode around in ostentatious royal white chariots drawn by white steeds, driven by formal coachmen in red uniforms and top hats, accompanied by marching bagpipers and flagbearers heralding their arrival — even when no one was there to greet them.

Hollywood director David Lynch was a graduate, though he didn’t accept the ti­tle or crown. He has continued to be a spokesperson for TM worldwide. The David Lynch Foundation has gained quite a foothold among the Hollywood elite supporting its meditation programs.

Near his death, Maharishi was in the public eye again. He conducted an aggressive worldwide publicity campaign and building project. Large ads appeared in the New York Times, newspaper articles about TM abounded, and “Maharishi Ayurveda Health Spas” cropped up everywhere. Sadly, nearly all closed a few years later.

Maharishi died February 5, 2008. On the same day, for the first time ever, NASA beamed a song, the Beatles’ “Across the Universe” directly into deep space toward Polaris, the North Star. Recorded exactly forty years previously, this song, written by John Lennon, quoted Maharishi’s oft-repeated Sanskrit phrase honoring his guru: Jai Guru Deva. As part of the celebration, people around the world simultaneously played the song at the same time it was transmitted by NASA.

In 1968, when filmmaker Alan Waite asked Maharishi what he would like to be remembered for, his answer was “Nothing.” But my hope is he will be remembered as a great spiritual master who played a leading role in an unparalleled revolution of consciousness. Right now the enigmatic guru might still be up to his old tricks — even from the beyond.