In a new interview, Thurman revealed details about an alleged attack and a car crash on the set of “Kill Bill” 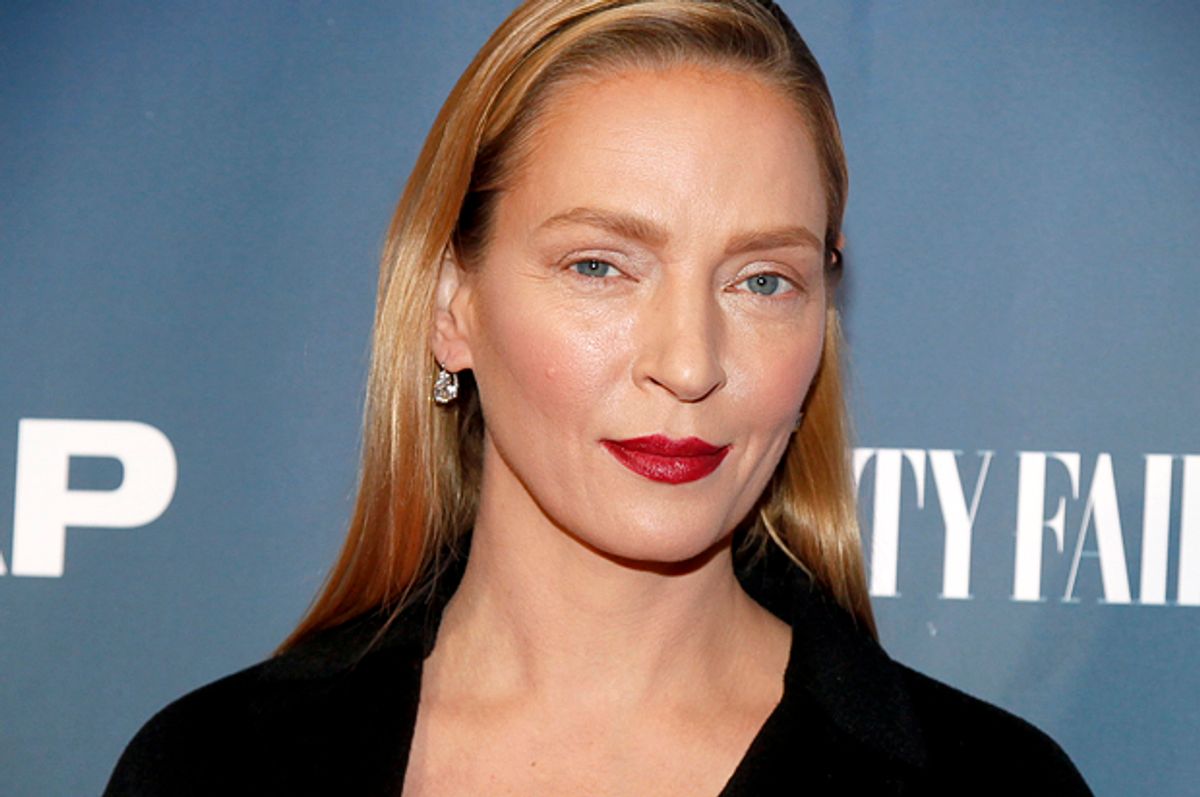 Harvey Weinstein may be in therapy in Arizona, but he’s far from putting the dozens of sexual assault, harassment and rape allegations behind him. Indeed, new allegations continue to surface.

On Saturday two separate reports detailed new accusations made against Weinstein, four months after the New York Times first broke the news in October, including one from Uma Thurman who starred as Mia Wallace in “Pulp Fiction” and Beatrix Kiddo in “Kill Bill,” Volumes 1 and 2.

In the interview with the New York Times published on Saturday, Thurman bravely recalled the terrifying time when Weinstein allegedly attacked her.

According to the report, Weinstein’s first attempt to cross boundaries happened in a Paris hotel room. Thurman and Weinstein were allegedly arguing about a script, after they worked on “Pulp Fiction” together, which is when the “bathrobe came out.” Recall, the bathrobe was an apparatus in separate narratives that survivors have recounted.

“I thought he was being super idiosyncratic, like this was your kooky, eccentric uncle,” Thurman said.

At this point, he allegedly tried to lure her down the hallway into a steam room, but she said “‘‘This is ridiculous, what are you doing?’” He allegedly “got flustered” and jumped out. Thurman escaped his potentially perilous behavior then, but it wasn’t long after the next alleged attack occurred in a London hotel room.

“It was such a bat to the head. He pushed me down. He tried to shove himself on me. He tried to expose himself. He did all kinds of unpleasant things. But he didn’t actually put his back into it and force me. You’re like an animal wriggling away, like a lizard. I was doing anything I could to get the train back on the track. My track. Not his track.”

The next day “a 26-inch-wide vulgar bunch of roses,” as described by Thurman, arrived at a friend’s house—where she was staying.

“They were yellow. And I opened the note like it was a soiled diaper and it just said, ‘You have great instincts,’” Thurman said.

Thurman thought she’d clear up the incident to which she met with Weinstein after receiving the roses. She said she warned him: “If you do what you did to me to other people you will lose your career, your reputation and your family, I promise you.”

Thurman reportedly can’t recall what happened next, but her friend who took her to meet with Weinstein—Ilona Herman—told the New York Times Thurman returned “disheveled.”

“Her eyes were crazy and she was totally out of control. I shoveled her into the taxi and we went home to my house. She was really shaking,” Herman said, who added that Weinstein had allegedly threatened to “derail” Thurman’s career.

Weinstein reportedly apologized for the London incident in 2001 at Cannes Film Festival.

An equally harrowing part of the report arrives at the time when Thurman worked with Weinstein and Quentin Tarantino again on “Kill Bill.” While filming the famous scene where Thurman is driving in the blue convertible, she reportedly expressed concerns that she didn’t want to drive the car and preferred a stunt double to drive it.

“Quentin came in my trailer and didn’t like to hear no, like any director,” she says. “He was furious because I’d cost them a lot of time. But I was scared. He said: ‘I promise you the car is fine. It’s a straight piece of road.’”

But Thurman had allegedly heard otherwise on set.

Fifteen years later, Thurman has finally obtained video footage of what happened next: Thurman trying to catch her breath as the crew helps her get out of the car after she crashed into a palm tree. Thurman went to the hospital, and returned with a neck brace, damaged knees, and a concussion.

After the crash, she tried to get the footage and Miramax allegedly said they’d send it to her only if she signed a document “releasing them of any consequences of my future pain and suffering.”

“Harvey assaulted me but that didn’t kill me,” Thurman said. “What really got me about the crash was that it was a cheap shot."

Thurman’s report was published hours before Deadline reported that Scotland Yard, a division of London’s police force, have received more reports on sexual harassment allegations made against Weinstein.

According to Deadline, they were filed on November 13, 2017 (though just becoming public now), and police said “that the man sexually assaulted a woman (Victim 9) in Westminster in 2011 and outside the jurisdiction of the UK in 2010.”

“The second allegation will be passed to the relevant police force in due course,” Scotland Yard told Deadline.