Patriots vs. Eagles: The perfect Super Bowl match-up for this America 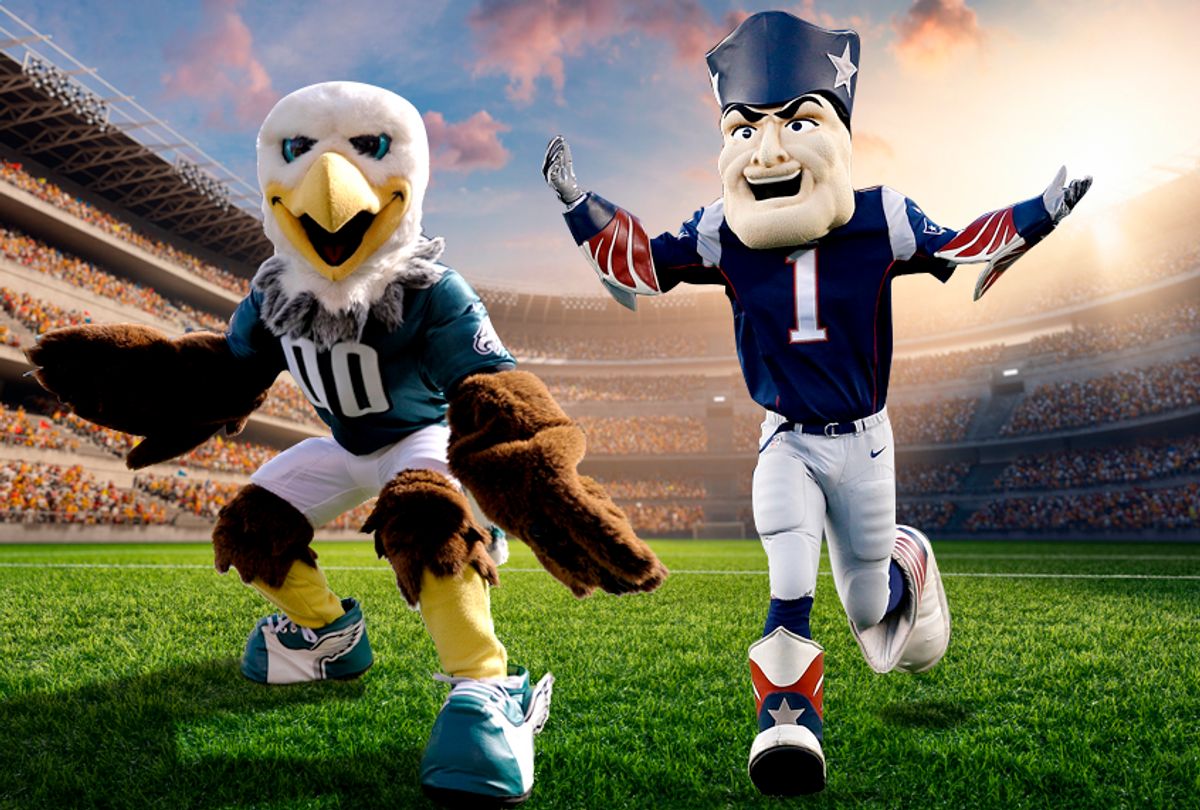 If you love America, then this has been the most patriotic season of professional American football in history. That's why I can't think of a more symbolically appropriate way to cap it off than with a game played between two teams whose respective mascots are American Revolutionary minutemen (the New England Patriots — and for this article I will refer to them as soldiers so I can discuss all of the revolutionary fighters from that conflict) and eagles (the Philadelphia Eagles).

American iconography has been particularly prominent in the NFL this year, thanks to the NFL players who engaged in political protests by kneeling in front of the American flag during the national anthem. While they have been harshly condemned by some for their actions — most notably by President Donald Trump and a number of other conspicuous conservatives — their critics forget that America is far more than just its flag. At its best, America is the idea that every human life has value and every human being has the unalienable rights to life, liberty and the pursuit of happiness. These rights transcend the importance of specific symbols (like a flag) or rituals (like standing during the national anthem). Without this idea at its heart, America is just one more country in the gaggle of nations that make up the global community. That's why each NFL player who followed Colin Kaepernick's example and protested during the national anthem — whether it was because they shared his belief in racial justice, were appalled at Trump's attempt to bully protesting players into silence, or both — was acting in the spirit of the highest form of thoughtful, substantive patriotism.

When future cultural historians look back at the 2017-2018 NFL season, this will be their verdict.

Before I proceed with my discussion about American Revolutionary soldiers and bald eagles, however, there is one flawed argument which must be dispensed with: A person is not a cop hater simply because he or she opposes the racist practices of many police officers. Logically speaking, it is possible to criticize individuals within a given institution, or even aspects of the institution itself, without opposing everyone in those institutions or everything they do and represent. While there are people on the ideological extremes who hate all police officers, or think we shouldn't have law enforcement personnel at all, there are also millions of people who recognize that cops perform a vital public service and are staffed by many men and women who deserve to be regarded as heroes.

A mature mind can simultaneously recognize both this fact and the reality that the rampant racial discrimination experienced by minorities from law enforcement in this country is deeply wrong. Anyone who claims that a critic of police actions is automatically a cop hater isn't just creating a straw man argument, but is shutting down intellectually honest conversation on a vital subject. They are the ones who, when looking back at this period in our history, will need to do so with shame rather than pride.

Now back to American Revolutionary soldiers and bald eagles.

To help me better explore this subject, I turned to Texas A & M Professor Larry J. Reynolds, who co-edited a book about American iconography, "National Imaginaries, American Identities." During our conversation he cited a quote from Nathaniel Hawthorne's "The Scarlet Letter" that seemed to perfectly sum up the duality embodied in Americans' embrace of the eagle:

But she has no great tenderness even in her best of moods, and, sooner or later — oftener soon than late — is apt to fling off her nestlings with a scratch of her claw, a dab of her beak, or a rankling wound from her barbed arrows.

As Reynolds noted, this made it clear that the eagle — which was chosen as a reference to the Roman Empire and was admired for its militant and aggressive character — could represent America's best and worst traits.

"In other words: As a symbol of the government, you gotta watch out, because the government can protect you, but it can also hurt you," Reynolds said.

He had a similar observation about the use of American Revolutionary soldiers, which appear as the Patriots' mascot. "The actuality is that the Continental soldiers, many of them were not patriots, right?" he said. "They were Irish guys, you know, [and] Hessian soldiers that had been released from prison."

Indeed, some of the most revered heroes of the Revolutionary War hailed from other countries, from Casimir Pulaski of Poland and Bernardo de Galvez of Spain to the Bavarian-French Johann von Robais, Baron de Kalb. These men, though foreign, were heroes whose contributions were essential to America's success in the Revolutionary War. They were also, notably, born in nations whose people faced discrimination at various points in our history when they tried to join the American community.

It shouldn't be necessary for me to explain how this ties into the current political zeitgeist, but in case you haven't made those connections on your own: We have a president with the most xenophobic immigration policy since Calvin Coolidge, one who disparages people from non-white countries, has implemented a ban against immigrants from predominantly Muslim countries and kicked off his presidential campaign by playing off of vile anti-Mexican stereotypes. Yet the team that is expected to win Super Bowl LII — a team that is, without question, one of the greatest football franchises ever to take the field — is represented by a mascot that is patriotic precisely because of the contributions of immigrants.

And for those who hate Patriots owner Robert Kraft, head coach Bill Belichick and quarterback Tom Brady? Simply note that, despite the pro-immigration implications of their mascot, the three men have a disturbing closeness to Trump.

The appearance of the eagle as one of the two main mascots this year also has a strong political subtext. If you are a part of a marginalized group in this country, you are aware of the fact that the same government that is supposed to defend you can just as easily become your worst enemy. Members of racial minority groups who are targeted by police officers — who are first and foremost representatives of the United States government — are all too aware of the fact that "the government can protect you, but it can also hurt you." This was the underlying reality that the NFL player protesters were identifying when they kneeled during the national anthem, in their case on behalf of racial minorities. It was also one that Trump unintentionally validated when he used his bully pulpit to exhort team owners into firing protesting players, an act of petty tyranny that was rightly called out by dozens and dozens of NFL players and personnel in the weeks that followed.

As Super Bowl LII unfolds in front of millions of TV viewers, it will be fascinating to see the icons employed by the New England and Philadelphia franchises battle out against the potent political narrative of this NFL season. While most viewers will be focused on the exciting game (as well they should be), it will help us to bear in mind that the political message being sent — both directly and in the iconographic subtext — is an incredibly important one. If nothing else, it will subconsciously reinforce the deeper significance of this game on a platform that will be seen by millions.

Kaepernick himself put it best in 2016:

Full disclosure: As a resident of eastern Pennsylvania, one could assume that I am biased toward the Eagles in this game. While I don't lack regional loyalty, I am a Green Bay Packers fan first and foremost.