Martin Luther King Jr. was a radical socialist, not a truck salesman 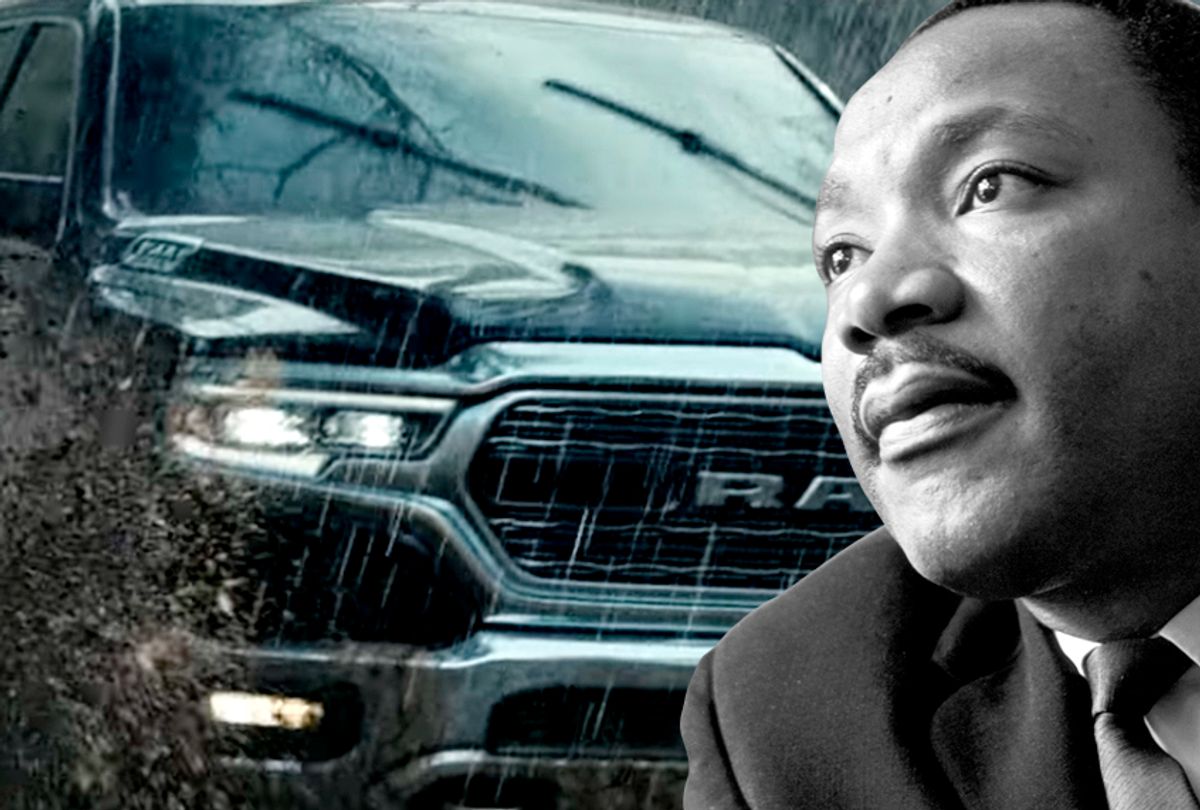 Capitalism is the monster that ate the memory of Dr. Martin Luther King Jr.

During Sunday night's Super Bowl game between the New England Patriots and the Philadelphia Eagles, Chrysler aired a commercial for its Ram pickup trucks.

Marketing and advertising is the art of creating false needs. To that end, the Ram Super Bowl commercial tried to evoke feelings of heroism and selflessness on the part of consumers by mating the purchase of a $40,000 dollar truck to images of "first responders," athletes, cowboys, military personnel, doctors, teachers and other "everyday" Americans. The narration for this ad was provided by Dr. Martin Luther King Jr.'s 1968 sermon "The Drum Major Instinct."

The Ram commercial borrowed heavily from this section of King's sermon:

Even by the standards of the dream merchants who work in advertising and marketing, Chrysler's use of King's speech to sell their trucks was dishonest and tone deaf.

Contrary to the caricature offered by this commercial, Dr. King was a democratic socialist who was keenly aware of the harm done to society and individuals by greed and consumerism. In fact, the quote used during Sunday's Super Bowl commercial was taken from the very same sermon in which King warned the audience about the way advertisers manipulate feelings of groupthink, loneliness and a need for conformity masquerading as individuality:

Now the presence of the drum major instinct is why so many people are "joiners." You know, there are some people who just join everything. And it's really a quest for attention and recognition and importance. And they get names that give them that impression. So you get your groups, and they become the "Grand Patron," and the little fellow who is henpecked at home needs a chance to be the "Most Worthy of the Most Worthy" of something. It is the drum major impulse and longing that runs the gamut of human life. And so we see it everywhere, this quest for recognition. And we join things, over-join really, that we think that we will find that recognition in.

Now the presence of this instinct explains why we are so often taken by advertisers. You know, those gentlemen of massive verbal persuasion. And they have a way of saying things to you that kind of gets you into buying. In order to be a man of distinction, you must drink this whiskey. In order to make your neighbors envious, you must drive this type of car. ["Make it plain!"] In order to be lovely to love you must wear this kind of lipstick or this kind of perfume. And you know, before you know it, you're just buying that stuff. ["Yes!"] That's the way the advertisers do it.

At the time of his assassination, King was exceedingly unpopular in the United States because of his focus on fighting poverty, standing against militarism, empowering working-class people and the poor, and struggling against housing segregation in Northern cities. The radical King -- as opposed to the sanitized and literally whitewashed public figure who is celebrated during Black History Month and embraced on his public holiday -- was a radical leftist who strongly opposed the excesses of capitalism and suspected that White America could not be rehabilitated from its racism.

For example, King said that "the price that America must pay for the continued oppression of the Negro and other minority groups is the price of its own destruction." He was also direct in his belief that white Americans "must recognize that justice for black people cannot be achieved without radical changes in the structure of our society.”

All in all, it's clear that King would not have supported a multinational corporation's attempt to sell wasteful and polluting vehicles in his name, nor did he support the destructive forces such a corporation both summons and represents.

Beyond abusing the history and reality of King's life, struggle and legacy, the Ram Super Bowl advertisement does additional harm as well. Misrepresenting Martin Luther King Jr. is an example of the way racial capitalism and neoliberal multiculturalism have convinced too many white Americans (and others) that the long arc of history along the color line has now permanently bent towards justice. In this delusion, white supremacy and white privilege have been vanquished and now it is white people who are the real "victims" of racism in post-civil rights era America.

Martin Luther King Jr. is an American hero and a global humanitarian. However, he belongs to Black America,and has a special relationship with black people's history. King's murder in 1968 made him a martyr. Some 50 years later -- and likely forever -- his loss is still a source of great pain for black and brown people around the world. With their failed effort to "honor" Dr. King, Chrysler and its advertising agency have mocked and cheapened that pain.

Unfortunately, such disrespect and callousness towards black and brown people is not new.

When black football players take a knee to protest the pain and death caused by white supremacy in America, they are condemned by White America and its champion, President Donald Trump. Why? Because the act of black and brown people protesting racism and white supremacy is perceived as being worse than the harm and pain caused by those historical crimes. Trump won the 2016 election, to a large extent, because he promised to elevate his resentful and bigoted public by hurting black and brown people in America and around the world.

Black pain is lucrative. It built America, and in 2018 it can be exploited to sell trucks during the Super Bowl.